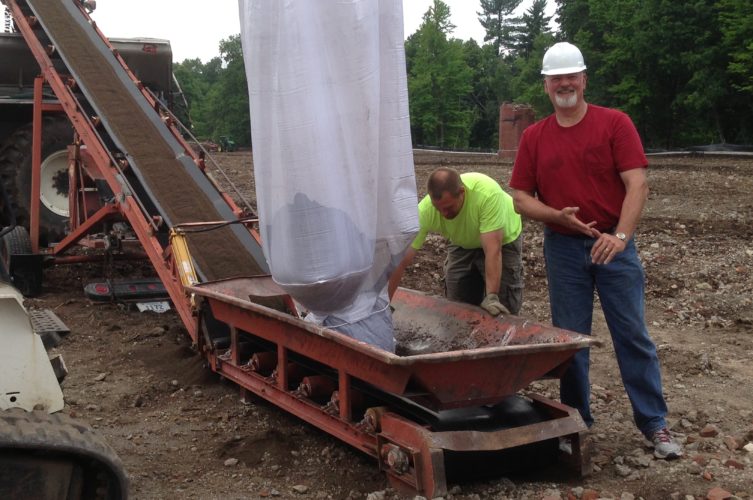 Great Barrington — Above ground, activity may seem to have quieted down at the contaminated former New England Log Homes (NELH) site on Bridge Street. Below ground, it’s another story.

Within the soil, a massive feast is underway as bacteria devour dioxins and pentachlorophenol (PCP), those industrial gifts that keep on giving. If all goes according to plan, the soil may be free of contaminants by October.

This first-of-its-kind bioremediation process began in May, when the tainted 8-acre tract on the Housatonic River was cleared and prepared for an application of organic material, designed to help inoculate native bacteria against impairment from dioxins and PCPs that permeate the Log Homes parcel so that they can degrade the contaminants.

It continued this week with the tilling of the contaminated soil with the organic substance that will enhance the capacity of bacteria to break down the toxic industrial organic compounds.

“We set a smorgasbord table for them [the bacteria],” said Christopher Young, president of North Carolina-based Biotech Restorations, as he surveyed the tractor spreading what he termed “the factor.” With his partner, scientist Dr. Valerie Paynter, Young designed the product that’s helps Mother Nature clean herself up.

Here is how the factor looked being spread:

Mother Nature, says Young, seems to approve, as rainfall over the last couple of weeks has cooperated with watering requirements. As a result, the irrigation systems, installed to manage dust and activate the materials, have hardly been used.

The Community Development Corporation of South Berkshire purchased the parcel from TD North Bank for $1 in 1997 after forgiving NELH’s $1 million mortgage. Ever since, Executive Director Tim Geller has tirelessly set about trying to clean up the site for redevelopment. After meeting Young he contracted with Biotech using money from the MassDevelopment Brownfields Redevelopment Fund. Geller said he is “optimistic” about last week’s procedure, which will take a few months to complete, and requires patience despite a degree of uncertainty, since a real world biological clean-up of dioxins has never been done outside the lab.

“One thing about working with Mother Nature,” said Geller, “is that she is an independent partner.”

The first ever treatment has been fascinating to watch –– and smell. A week ago, soil amendments from local outlets were added to the site to raise the soil’s natural bacteria levels, which cause the bacteria to eat faster, consuming the pollutants “as a carbon food source,” said Young.

It’s a local project: Compost was procured from McEnroe Organic Farms in Millerton, N.Y. Interestingly, McEnroe’s compost, in part, comes from the Berkshire Co-Op Market, just down the road from the NELH site, where the Co-Op may also relocate. The soil amendments also included nitrogen fertilizer from Crop Production Services in Amenia, N.Y.; and agricultural lime from Allyndale Limstone in Canaan, Conn. The lime was added to “adjust soil pH,” said Young.

It was a stinky endeavor. It was during this soil amendment phase that a resident who lives across the street from the site reported the scent of ammonia. That smell, said Young, came from the addition of the nitrogen. “It smells like a dirty diaper pail,” he added. “When bacteria breaks nitrogen down you get ammonia. It’s just more noticeable because it’s in a residential area.”

After the soil amendments came Biotech’s concoction, which was applied Monday to the entire site in just an hour and a half, said Young, even though winds were gusting up to 20 miles per hour, blowing around the “dirt” carrier for the product. It was applied by a large spreader, and areas where higher contaminant levels were found were given a second treatment “for insurance purposes,” said Young.

And as if by higher power, a hard rain fell, exactly what was needed to activate the product.

The product itself had its own scent owing to bone and fishmeal, and organic fertilizer. The site is a bit like a working farm, and it will continue to look like one. Between now and October, the soil will be irrigated, and cultivated down 18 inches once or twice a week with a ripper to aerate and pull deeper soils up to insure equal treatment. Young said that an inch of rain per week means no irrigation, a priority for keeping dust down until all soil contaminants are degraded. “If we eliminate contaminants we eliminate risk,” he said.

How will we know when that happens? Ransom Consulting Engineers and Scientists out of Byfield, Massachusetts are on site, flagging and taking GPS readings where soil samples have been pulled. Eighty samples were pulled by Ransom on Wednesday (July 9) to get a baseline, and samples will be pulled periodically in order to hit benchmarks.

“It’s bloody expensive,” said Geller of the testing, which is covered by the Brownfields money, and is part of the CDC’s “extensive testing plan” agreement with the Department of Environmental Protection, said Geller. The earliest baseline results should be available by early August, he added.

The soil characteristics at the site are also being analyzed for future construction, as some areas contain soft spots –– as deep as 20 feet –– where Log Homes dumped large quantities of scrap wood. “That work has to be done now,” says Geller, “since we are heavy into the design and site planning phase” of the redevelopment, which may include the relocated Co-Op Market, housing, and community gathering spaces along the Housatonic River.

NELH treated their wood with preservative chemicals containing carcinogenic chlorinated compounds. The company went bankrupt, and left an expensive environmental and financial mess. The Town of Great Barrington forgave $300,000 in back taxes, and TD North Bank, a $1 million mortgage. Former president of NELH, Len Suzio, went on to become a banker and a Republican Connecticut State Senator whose campaign themes, according to his 2011 campaign website, included “borrow only what you can pay back,” and “the more government tries to do, the less it does well.”

If successful here, the bioremediation could revolutionize the way thousands of industrial parcels are cleansed of pollutants. Biotech has already reduced pesticide levels at a number of sites, and neutralized PCBs both in the lab and on a 5-acre property in California. The Log Homes site, however, will be the company’s first real-world test for dioxins. Soil from the site was bench-tested in the lab last winter: the process reduced dioxin levels to almost nothing in 10 weeks, better than the 20 nanograms per kilogram goal mandated by the state Department of Environmental Protection.

That the dioxins degraded so successfully is yet another indication that Biotech’s technology could destroy PCBs bound to sediment in the Housatonic riverbed, banks and flood plain.

“It’s a general coversation (with the DEP),” said Young, of the possiblilty that success at the NELH site will transfer to the River clean up. “There’s lots of interest on the part of the Agency, and the EPA is still following it.”

“We are out there at the edge,” said Geller of this revolutionary method of remediation. “If results are any thing like what we had in the lab, then we should do really well.”