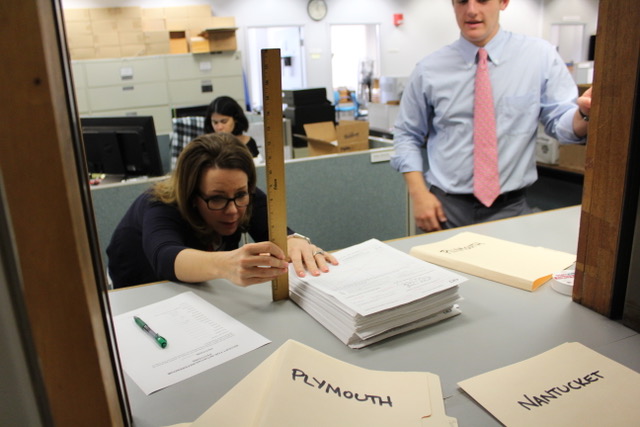 Signatures in support of the 'People Govern, Not Money' ballot initiative were delivered Tuesday to the office of Mass. Secretary of the Commonwealth William Francis Galvin. Photo courtesy American Promise

Boston — On Tuesday (July 3), Massachusetts Secretary of the Commonwealth William Francis Galvin received more than 20,000 certified signatures for the “People Govern, Not Money” initiative petition, putting the initiative on track to appear on the 2018 ballot. The initiative asks voters to establish a nonpartisan Citizens Commission to advance the writing of a 28th Amendment to the U.S. Constitution to address the undue influence of concentrated money on elections and government policy. The constitutional amendment would overturn the Supreme Court’s decision in Citizens United v. Federal Election Commission, which struck down the Bipartisan Campaign Reform Act and other campaign finance laws under a theory that corporations, unions and the wealthy have a free speech right to spend unlimited money to influence elections and that corporations have the same inalienable rights as human beings. The petition clarifies that, “inalienable Constitutional rights are the rights of individual living human beings and not of artificial entities or aggregations of people..”

American Promise, the group responsible for creating the petition, is a national, nonprofit grassroots organization which advocates for the 28thamendment to the U.S. constitution to overturn Citizen’s United employing a 50-state strategy to lobby members of Congress and the public on both sides of the aisle. Last month, American Promise hosted the National Leadership Conference in Washington DC with speakers like Bill Moyers and Nina Turner from Our Revolution to engage young voters, political candidates, and members of congress into a discussion about how to achieve campaign finance reform.

In 2012 and again in 2014, the Massachusetts Legislature passed cross-partisan resolutions supporting the writing of a 28th Amendment and calling on the U.S. Congress to pass the amendment and send it to the states for ratification. More than 150 cities and towns in Massachusetts have likewise passed such resolutions. Versions of the 28th Amendment to overturn Citizens United have more than 40 co-sponsors in the U.S. Senate and 150 co-sponsors in the U.S. House of Representatives.

The “People Govern, Not Money” initiative will create the first-in-the-nation nonpartisan 15-member Citizens Commission, which will research, take testimony, provide reports and make recommendations to assist in the drafting, promoting, proposing and ratifying of a 28th Amendment. The Citizens Commission will provide accurate information about the influence of money in Massachusetts politics, recommend language for a constitutional amendment and prepare Massachusetts to ratify the amendment when it is passed by Congress. By utilizing volunteers to serve on the Citizens Commission, there will be no cost to taxpayers.

Nineteen states and over 800 cities and towns have passed 28th Amendment resolutions with cross-partisan support. In Montana and Colorado, voters have approved 28th Amendment ballot initiatives by 75–25 percent.

Volunteer-led signature gathering efforts are also underway in Wyoming to place an initiative calling for the 28th Amendment on the 2018 ballot in 2018.

There are two ways to pass an amendment to the U.S. Constitution, and by design, Article V of the Constitution makes the process as long and arduous as possible. An amendment may be proposed to Congress with a two-thirds majority vote in both the House of Representatives and the Senate or by a Constitution Convention which must be called for by two-thirds of state legislatures. Interestingly, the president is not given a constitutional role in the amendment process.

The call for the 28thamendment comes as the Koch Brother’s announce their plans to spend $400 million dollars on the midterms election while a recent survey by the University of Maryland shows that 49 percent of Republicans and 72 percent of Democrats and 60 percent of all voters believe that “reducing the influence of big campaign donors” is “very important.”

Despite strong support from the public, the road ahead for advocates of campaign finance reform has already proven to be riddled with obstacles, perhaps proving the thesis of American Promise: that money influences politics more than public opinion. If the People Govern, Not Money Petition appears on the ballot this year, it will ask voters to establish a non-partisan Citizens Commission to advance the 28th Amendment to curtail unlimited spending in U.S. elections. For a law to be passed, the petition will need at least 30 percent of the ballots cast to vote the affirmative as well as the majority of ballots cast on that question.

The midterm elections are nearly five months away, and a record number of people, and the highest number of women are running for Congress and spending on House and Senate races is projected to reach $800 million dollars. The volunteers, activists, and community leaders behind The People Govern, Not Money petition envision a different way of running elections with a fraction of the money spent, but first, people have to vote for it.