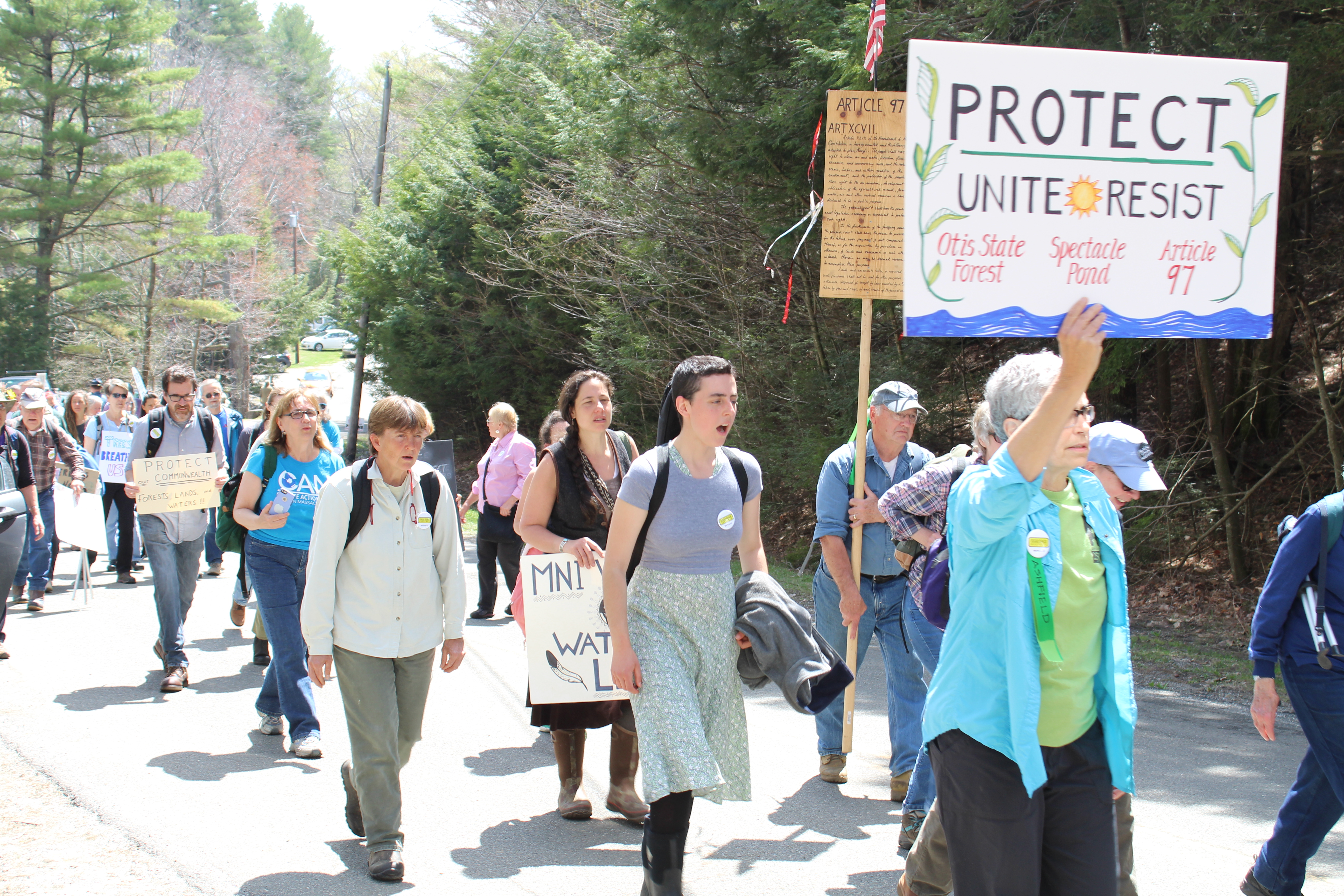 Sandisfield — As they did last July, about 75 environmental activists from the Berkshires and beyond descended upon Lower Spectacle Pond in the Otis State Forest Friday morning to continue the fight against an energy company’s plans to clear almost 30 acres of publicly owned forest to make room for a natural gas pipeline expansion.

Dozens of State Police troopers and private security guards hired by Tennessee Gas Pipeline, a subsidiary of energy giant Kinder Morgan, stood watch along Cold Spring Road, clearly prepared for the worst. But the demonstration organized by the Sugar Shack Alliance, an environmental advocacy group, was peaceful yet spirited.

Amid the pro-environment and anti-fossil-fuel signs, there was much singing, including a chorus of “We shall not be moved, just like a tree standing in the water.”

“Take a moment to listen to the sound of the birds in the trees,” urged Sugar Shack Alliance’s main organizer, Susan Theberge. Aside from the birds, the only audible sound for the next minute was that of camera shutters from members of the news media.

“We believe action is urgently needed to protect the world from climate change,” Theberge said. “We can’t be building any more fossil-fuel infrastructure.”

But expanding the existing pipeline corridor in Otis State Forest requires clearing of dozens of acres of forest that is now owned by the state, which purchased it for conservation and put it into protection under the Department of Conservation Resources (DCR) and the Massachusetts Constitution.

Theoretically, the Otis State Forest is protected under Article 97  of the state constitution, and was adopted in 1972. The article says “the people shall have a right to clean air and water … and the natural scenic, historic, and esthetic qualities of their environment,” with the fulfillment of these rights to be carried out through state parkland acquisition and conservation. Only a two-thirds vote in both the House and Senate can remove conservation status.

There were several signs placed on the ground or held by protesters alluding to Article 97. Some of them even included the entire text of that part of the state constitution. One protester could be heard reciting portions of it for anyone who would listen.

After the company sued, Berkshire Superior Court Judge John Agostini ruled in favor of Kinder Morgan subsidiary Tennessee Natural Gas, basing his opinion on the Supremacy Clause of the United States Constitution, which gives federal laws, such as the 1938 Natural Gas Act, precedence over state laws when conflicts occur.

The company has already started erosion control measures related to the project in the area, but the tree-cutting aspect clearly troubles the Sugar Shack Alliance and its followers, who insist the area is a well-known nesting area for great blue herons and other important wildlife.

“How many nests will they cut down?” asked Bill Kitchen of Johnstown, N.Y. “They’ll be cutting when they eggs have hatched.”

In addition, the company’s plans to draw millions of gallons of water from Lower Spectacle Pond to flush its newly installed pipes has environmentalists worried.

Susan Triolo of Sunderland wondered aloud what the impact to the pond’s well-being would be from drawing so much water out of a pond of only some 70 acres.

“And we don’t know what kinds of chemicals will leach back into the bond,” Triolo told The Edge.

Ron Coler, a selectman in Ashfield, suggested the next demonstration might not be as peaceful as Friday’s. Coler, who was himself arrested last year in an anti-pipeline protest in Washington, D.C., urged law enforcement officers who were standing by to “go down the street and arrest Kinder Morgan and its contractors for trespassing on constitutionally protected land.”

“Next time I may put my body between the destruction of our forest,” Coler said. “I will assert my rights to prevent the desecration of this beautiful place.”

In a statement before the protest, Sugar Shack member Cate Woolner described the group’s strategies as “imaginatively nonviolent,” adding that her group’s code of conduct “includes a commitment to no property destruction, peaceful actions, and the presence of peacekeepers, legal observers, and police liaisons at all actions.” Woolner added, “Anyone who acts outside of these conditions is not endorsed or part of Sugar Shack.”

Ron Bernard, a publisher of the Sandisfield Times who lives adjacent to the state forest and through whose land the proposed pipeline would run, told the crowd, “We haven’t had this much excitement around here since Shay’s Rebellion in 1787.”

The backdrop of Friday’s Otis State Forest protest was a another larger but related protest slated for the following day: the People’s Climate March in Washington, where — ironically — temperatures were expected to exceed 90 degrees.

Asked what her group’s next step would be, Sugar Shack spokesperson Abby Ferla replied, “We certainly are not going anywhere. We are trained in peaceful civil disobedience and nonviolent direct action, and if construction persists, we are prepared to put that training to use.”

For his part, Kitchen, the man from Johnstown, N.Y., was carrying a sign with a computer-generated image of what iconic musician John Lennon would look like if he were alive today. The sign read, “Imagine, no more fracking.”

“There’s no doubt where he would have stood on these issues,” Kitchen said.