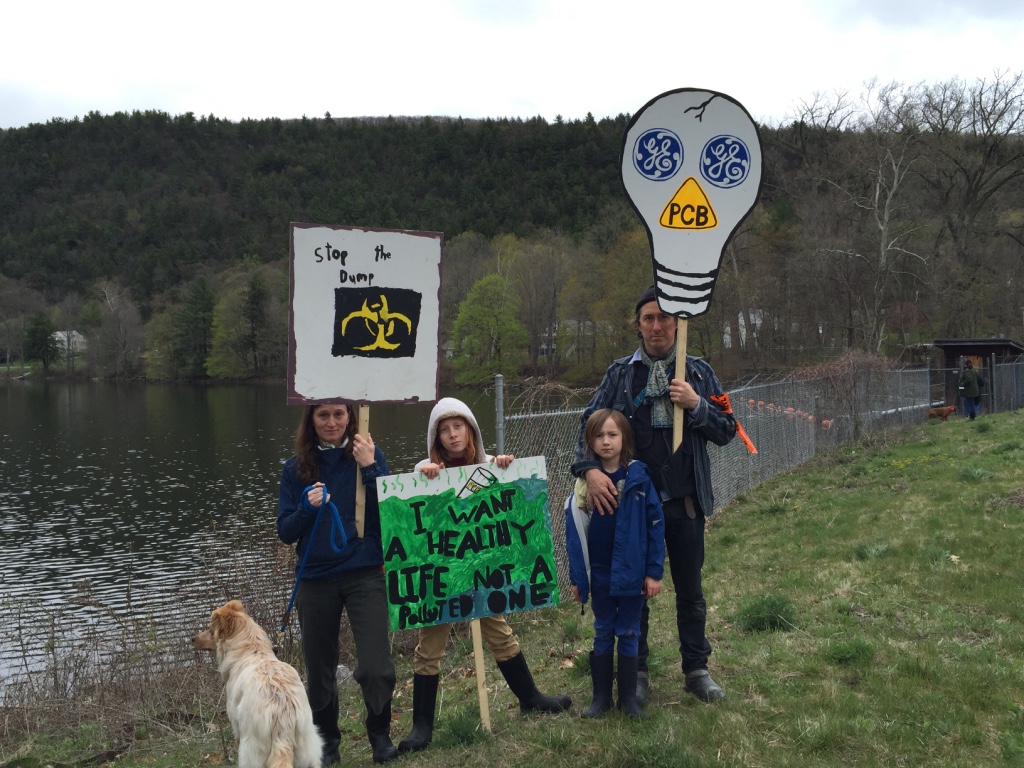 Reed Anderson and his wife, Gretchen, and children Horace and Holiday. Anderson bought his home (in the background, right) earlier this year. He says his real estate agent never told him of the possibility that a PCB dump might be situated just across the pond at Rising Paper dam, where he will be able to see it from his home. Photo: Heather Bellow

This village within the town of Great Barrington is the location for one of three of GE’s proposed Berkshire County dumpsites to contain toxic PCB (polychlorinated biphynals) waste after it is dredged from Housatonic River sediment. The company’s Pittsfield plant for years polluted the river and the

neighborhoods around it, sending the industrial organic compounds known to harm human and animal health down the river as far as Connecticut. GE was forced by the Environmental Protection Agency (EPA) to clean up PCB contamination around its transformer manufacturing complex in Pittsfield but  now the agency is ordering the company to clean the “Rest of River” — from Garner Park in Pittsfield to the Connecticut border and ship the waste out of state to an authorized PCB remediation facility.

But GE, which owns property along the river that is earmarked for the waste — in Lenoxdale, Lee and on the banks of Rising Pond in Housatonic — is fighting the EPA over it, saying it will cost $200 million more to ship the pollution out. And it is unclear whether the EPA will win this legal battle against GE.

Meanwhile, in Housatonic, homeowners are now worried about their property values — not to mention potential health risks from a nearby dump — and prospective homebuyers are now saying they won’t buy in Housatonic.

“You can’t show any property in Housatonic without mentioning [the dump],” said Barnbrook Realty’s Claudia Laslie. “As a conscientious person looking out for your buyer, we have to disclose that there might be a dump located there —you can see right there what problems that creates.”

“We would always make sure that people understand that there is this possibility,” said Stonehouse Properties co-owner Randy Thunfors. He said he has discussed it with clients when the matter has come up, though Stonehouse has not been involved in any sales that were close enough to the site to be an issue.

Barnbook owner Maureen White-Kirby says she’s seeing a “real and tangible” effect on the market as her clients won’t even consider Housatonic. “There’s a buzz about it,” she said, “though the consequences may take a little while.”

Artist and life coach Reed Anderson did buy in Housatonic earlier this year after moving with his family from New York. He did so only because he didn’t know about the dumpsite and, even worse, that it would be within eyeshot of his home.

“I was told nothing about [the dump],” he said. “I would not have bought there.”

He added that he feels “slighted” by the agent who sold him the house, and that it “saddened” him “about the state of human relationships.” When he later confronted his agent about this, Anderson said he told him the dump “was never going to happen.”

“There’s a good chance it will happen,” Anderson said. He said disclosure was a “moral” obligation, and should be the law. “I was paying a commission; I’m paying them to protect me. They are schooled in this.”

Anderson consulted an attorney who said he had received other similar calls from Housatonic homeowners. Anderson said the attorney told him that, if the dump is realized, Anderson would have to prove his home value was affected. “This could be a mess for Great Barrington. I don’t want to see that; I love this town.”

Local attorney Richard Dohoney — and former member of the Great Barrington Planning Boad — says Massachusetts is a “buyer-beware state.” There’s no duty to disclose “any facts that may affect the future value of the real estate, including the potential for a future PCB dump in the area.”

Dohoney said that sellers and brokers, however, can’t misrepresent properties. “If they made a statement of fact that was false about the dump, then there might be a claim.”

Dohoney said that, generally, there is “very little relief available to buyers in those situations.”

As a result, Housatonic is off the table for many because of GE’s plans. One local real estate investor, who did not want to be identified, told the Edge he would not consider purchasing in Housatonic.

But if GE thought it could quietly buy properties along the river for future dumps and not have a public relations nightmare on its hands, it may have messed with the wrong town. Take a step into the woods, or onto sidewalks here or in downtown Great Barrington, and one will see signs that remind residents and tourists what’s coming nearby.

Anderson, who is not alone in his activism since a 2015 EPA Housatonic River Citizens’ Coordinating Council meeting set off the alarm bells about the dumps, is making more anti-dump art using GE logos. And the signs nailed to trees and utility poles — that’s the work of River Ghost, an underground movement to spread information.

There have been two marches, and activist group Housatonic River Initiative is continuing its long-term work of keeping a fire lit under GE and the EPA.

Anderson says he worries that saying the dumps won’t happen might lead to a complacency that could give GE its way. “To fight effectively we must believe that it is entirely possibly that GE can move ahead with its plans to build the PCB dumps it plans to build. To think otherwise is to believe that GE would put our personal good before their corporate greed.”

“After everything,” said Barnbrook’s Laslie, “you’d think [GE] wouldn’t want to further sully the Berkshires and create more bad will.”