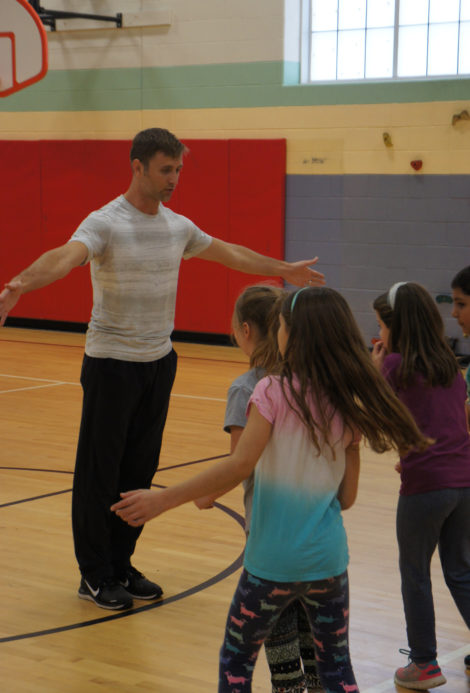 Paul Taylor Dance at Muddy Brook Elementary School, in partnership with The Mahaiwe

Great Barrington — On a recent afternoon, 30 third-grade students at Muddy Brook elementary were actively engaged in making connections with the world around them despite their school’s seemingly insular location at the edge of rolling farmland at the base of Monument Mountain. At the helm was James Samson, a veteran dancer with the Paul Taylor Dance Company, who was working hard — but not necessarily to sell students on the merits of dance. His intent? To open their eyes to the physical movements that form the basis of so many things young people enjoy. Like sports. “I’m very athletic and I’m very acrobatic,” Samson announced to cheers and giggles. As if on cue, one student replied, “I love back handsprings!” And the conversation continued: “And baseball slides, like sliding into home plate,” offered Samson. “I do that!” was the immediate reply from across the room. And so it was the athleticism of dance that became the topic of the afternoon’s lesson. The workshop, made possible by the Mahaiwe Performing Arts Center’s education program, brought Paul Taylor dancers into five schools throughout Berkshire County in conjunction with the Paul Taylor Dance Company’s 10th consecutive season at the Mahaiwe.

Samson, who began his dance career at age eight and later became a competitive gymnast, choreographed a routine for students who — despite age appropriate attention spans — not only listened intently but also participated enthusiastically. A diverse group of kids spread out across the gym, encouraged to follow Samson’s lead. In this vein, a steady momentum built among the group, some of whom were quicker to catch on than others, as they moved through a series of movements being modeled by Samson. What began as a gentle warm-up with students sitting cross-legged on the floor transitioned into sweeping arm movements that ultimately gave way to running, leaping, cartwheeling, rolling and various combinations of them all. When asked, “Who can jump over the cones?” Samson had to navigate a sea of volunteers, waving their hands high in the air. “I want to see you jump higher!” said Samson, often taking a moment to walk through the routine with a particularly reticent student. And the result was a balanced combination of cajoling, competition and cooperation all of which came together with seeming ease. 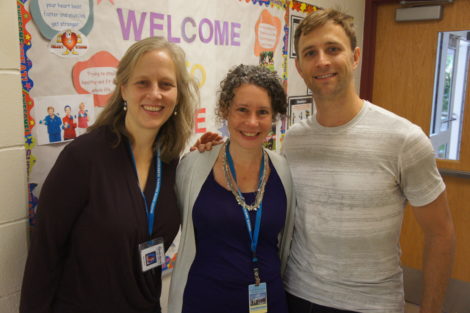 The presence of the Mahaiwe’s education program is just one part of what Muddy Brook principal, Mary Berle, calls, “an approach [to education] that combines teamwork and innovation in challenging times.” As in life, students were reminded to “be aware of your own personal space,” and “see who you are passing,” while simultaneously being aware of their surroundings. Samson made quick work of corralling students with the introduction of slow, rhythmic percussion beats that served as a functional backdrop to the participants’ physical motion. The cacophony of tiny voices punctuated by squeals of laughter were testament to the afternoon’s success. Berle, clad in stocking feet, joined students in stepping outside of their comfort zones to take part in the workshop.

As Samson coupled footwork with arms, and speed with tumbling, he modeled each step with apparent ease and dexterity. “Let’s see how fast you can travel front and back, front and back,” Samson challenged. And the students did just that, meeting his requests with a quick pace and high energy. 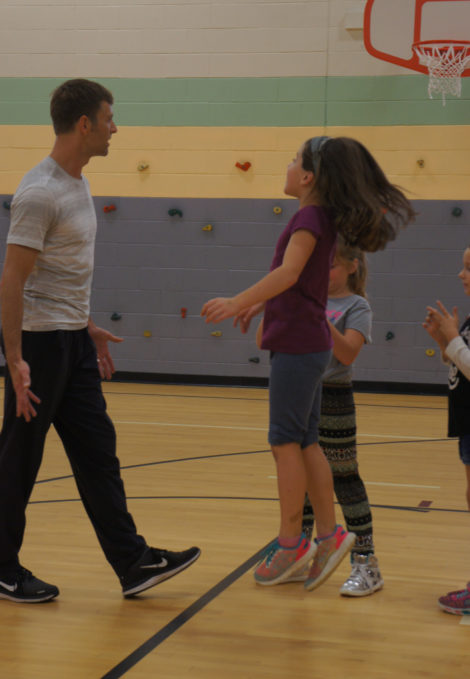 The presence of community partners is routine at Muddy Brook. During an impromptu tour of the building, where 360 students are enrolled in grades pre-K through grade four, I spied several display cases and murals created with IS183 in Stockbridge. Berle explained that first grade partners with Flying Cloud Institute, second grade with Jacob’s Pillow, third grade with the Norman Rockwell Museum and fourth grade with Berkshire Theater Festival. This history of these partnerships models for students that, among other things, “anybody can be a dancer,” said Beryl Jolly, Executive Director of the Mahaiwe. And, according to Berle, the Mahaiwe is “one of our uber partners.” She continued, “we usually go to the Mahaiwe — an iconic Berkshires experience,” but this time the Mahaiwe came to Muddy Brook. “Beryl [Jolly] and Judy [Reinauer] are always looking for ways to have an impact year round,” said Berle. As to what fuels her work in the community, Jolly hardly hesitated: “One flicker of imagination can make anything possible,” she said, underscoring the importance of exposing children to myriad experiences while they are impressionable.

As we traversed the hallways, the energy remained palpable as the third graders returned to their classrooms. “That was really fun!” one student remarked audibly. Another added, “Mrs. Berle, you did a great job!” This reception to the interdisciplinary experiences is overwhelming and certainly fuels the engagement in project-based work that Berle is striving for.