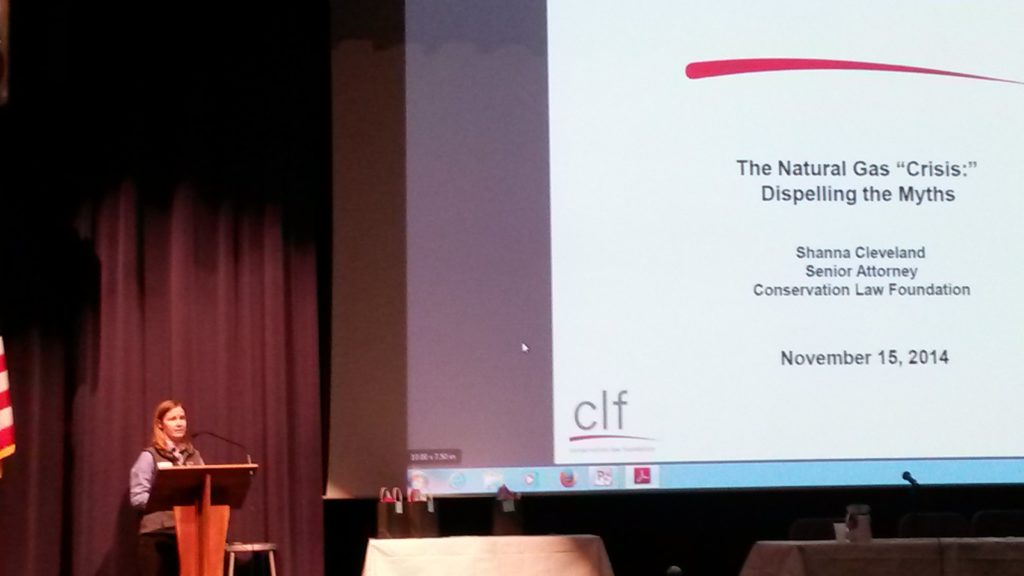 The path of pipeline resistance: Activists convene in Fitchburg

Hundreds of concerned citizens – affected landowners, environmental and community activists, as well as lawyers and legislators – gathered in the auditorium of the Monty Tech School in Fitchburg last Saturday, November 15 to learn about and discuss the TGP plan for a high-volume, high-pressure pipeline that cuts across western and northern Massachusetts. 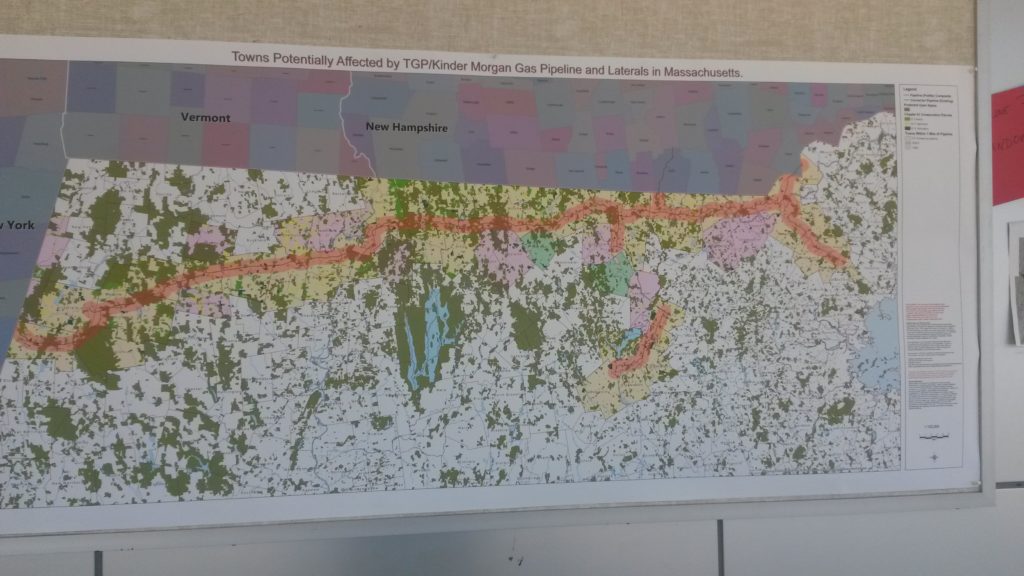 The path of the proposed $5 billion Kinder Morgan natural gas pipeline that would transport natural gas from the hydrofracturing fields of Pennsylvania to eastern New England utilities and ports for export.

The 128-mile long, 36-inch wide NED pipeline would transmit fracked natural gas from a hub in Wright, NY to the eastern hub in Dracut, MA, passing directly through the Berkshires on its route east. The Wright hub would connect with Pennsylvania fracking sites to the west through a proposed “supply path” portion of the larger NED pipeline. The eastern segment ending in Dracut would connect with the Maritimes and Northeast pipeline in Maine.

Saturday’s Stop the Pipeline Statewide Summit drew a crowd of nearly 500 folks from over 75 communities across Massachusetts, Connecticut, New Hampshire and New York. The grassroots, volunteer-organized event provided participants the opportunity to hear from state legislators and several attorneys, as well as a chance to network and strategize through a breakout session following the formal Summit program. Attendees also were able to view large scale, citizen-created, town-by-town maps of nearly all of the 45 communities along the TGP preferred route.

To date, 39 communities (including some not in the direct path of the pipeline) have formally passed resolutions opposing the Kinder Morgan project. Pittsfield became the latest town to say “no” when the City Council voted 8-1 to oppose the pipeline last Wednesday evening, Nov. 12.

Despite the widespread community opposition, Kinder Morgan is forging ahead with its proposal, which is currently in the pre-filing stage with the Federal Energy Regulatory Commission (FERC). 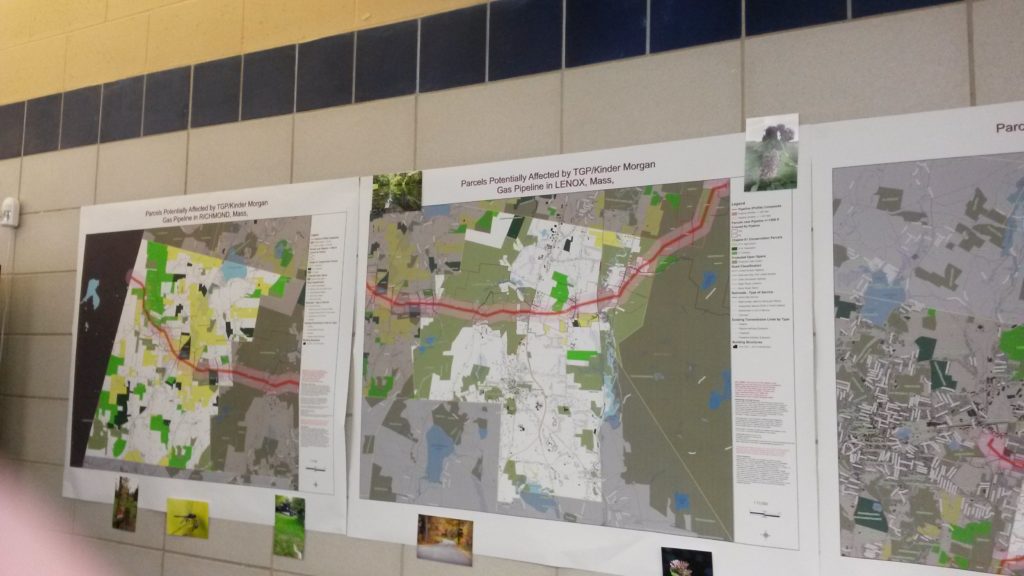 Maps showing the parcels in Richmond and Lenox that would be transected by the Tennessee Gas Pipeline.

Before the formal Summit session wrapped up, Attorney Anne Marie Garti offered her insight into the multistage FERC process, drawing on her recent experience fighting the proposed Constitution Pipeline in neighboring New York State. Garti advised attendees on how to participate in the formal FERC process, including how to comment to the federal agency in a way that protects citizen rights and interests. She also suggested several strategies for citizens opposing the project, such as encouraging landowners to deny access to their property for surveying, and staying unified with others across the region who may be affected under one of the alternate routes.

As Garti emphasized, denying permission to survey is a key power that landowners hold, and one that, if asserted by enough people, could potentially halt the pipeline. According to anti-pipeline activist and Cummington resident Rosemary Wessel, thus far about half of the property owners along the proposed route have refused or rescinded permission to survey.

Beyond strategizing to stop the pipeline, a key objective of the Summit was advancing the argument that a clean energy economy is possible and necessary. “Our mission is twofold – stop the pipeline, and promote a clean, sustainable energy future,” explained Hartlage.

Conservation Law Foundation senior attorney Shanna Cleveland further expounded on the need to push for fossil free energy rather than settle for “more of the same.”

“Kinder Morgan, and a lot of the folks in the industry and a lot of the folks in power, wants you to think that every one of these pipelines is inevitable. That’s not true,” she said in opening her presentation. “What is possible and what is necessary for us to maintain life on this planet as we know it is to change the vision that people have for our energy future.”

Cleveland went on to explain why the arguments Kinder Morgan put forth claiming natural gas is the only economically viable solution to meet the region’s energy demand are false contentions.

For example, by overbuilding pipeline capacity and flooding the market with excess supply of natural gas, it lowers the price power generators pay for the gas, making alternative energy sources like solar and wind seem more expensive than they otherwise would be. Cleveland also pointed to the 2013 Black and Veatch study indicating that if Massachusetts were to chart an energy future based on a low demand scenario that prioritizes maximizing energy efficiency, building distributed power generation and increasing renewable energy, while weaning off fossil fuels, then no additional gas infrastructure is needed or justified.

Ultimately, as Cleveland pointed out, this pipeline fight is really a battle over deciding our energy future.

“It’s a campaign about the future of our energy system, and there are a lot of powerful people involved. We’ve already seen the resources those people have,” she said. “We’re going to have to work really carefully together to make sure everyone uses the resources they have in the best way that they can and coordinate so that we can build the energy future we want to see, not the energy future that ISO-New England and a lot of regulators think is inevitable, but the one that is possible, and the one that is necessary.”

Several Summit participants from the Berkshires also expressed the need to steer the state towards clean energy and away from increasing fossil fuel infrastructure.

“If we’re looking globally at where we are in the climate change trajectory, we have to be moving away from gas really fast. Especially in a state like ours and in a country like ours that’s highly developed, and we’re in a state that’s pretty progressive and is a leader in the nation in energy efficiency, there’s no reason we why should be exploring more natural gas and expanding our capacity,” explained 350MA Berkshires Node leader Ellie Johnston.

“I think it’s important to think about our clean energy future, and focus on the reality that we can get off of gas,” added Dalton resident and Node member Cheryl Rose. “We need to help educate more people about the details of that, and not let the myths perpetuated by the gas industry be the conversation. We need to change the conversation.”