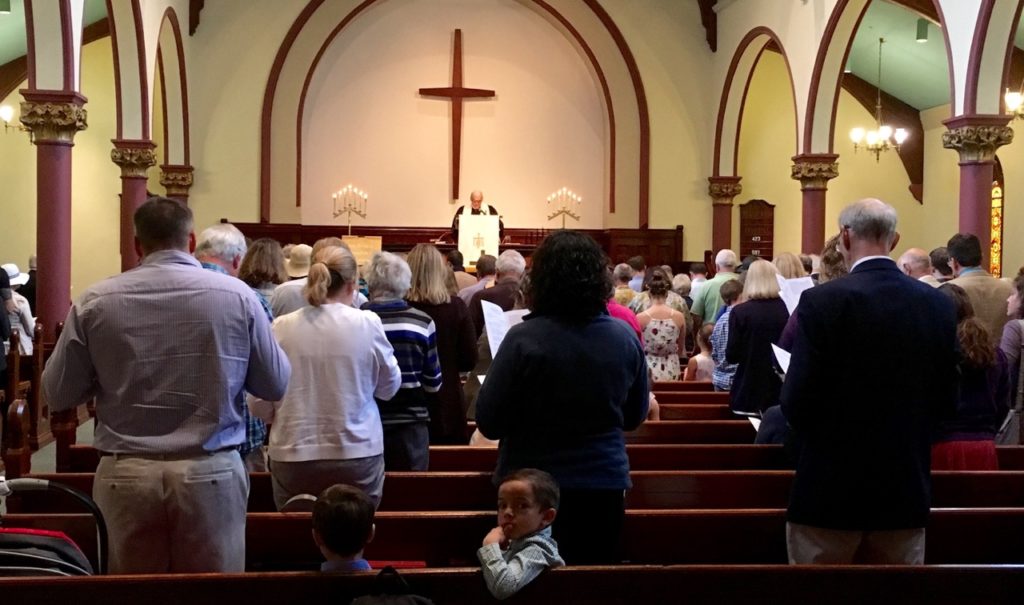 Andrew Blechman
The Rev. Charles Van Ausdall delivering his final sermon at the First Congregational Church of Great Barrington, after 30 years of serving as the church's -- and the community's -- pastor.

“Do you, the members and friends of the First Congregational Church of Great Barrington, release Charles Van Ausdall from the duties of Pastor?

“Do you, Pastor Van, release this church from turning to you and depending on you?”

The Congregation may be seated….

With these simple yet deeply symbolic words, the 50-year ministry of Rev. Charles Van Ausdall — 30 of which were here in Great Barrington — came to an abrupt end.

Pastor Van asked for forgiveness for any mistakes he may have made, accepted a few token gifts of gratitude including a hand-carved walking staff, removed his stole — the symbolic vestment worn by ministers of certain denominations — and strode down the church aisle, his normally stoic gaze glassy with emotion, parting through the sanctuary doors alone. He readied himself to greet members of his former flock as they made their way out of church and into a drizzly afternoon.

Many know Pastor Van — the church’s longest-serving minister — as the pastor with the stately stone parsonage attached to the Congregational Church in the middle of town on Main Street. On sunny days he could be found sitting on a lawn chair in front of the parsonage, greeting passersby with a smile, a wave, an invitation to conversation. Nearby sat a metal bowl filled with fresh water for thirsty canine companions. 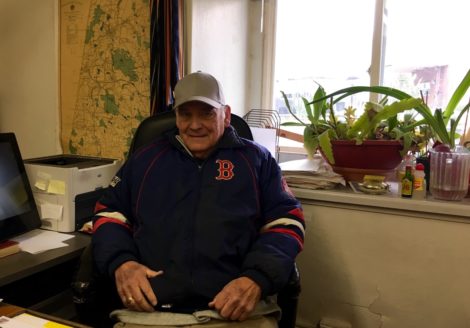 Pastor Van in his office, where he welcomed visitors and congregants. Photo: Andrew Blechman

Pastor Van had an open door policy. Everyone was welcome — regardless of religious affiliation — to walk down a short flight of stairs on the south side of the church, to his modest and often-cluttered basement office to discuss town issues, national issues, personal issues, or to simply discuss his beloved Red Sox. There was never a timer, no meter running. When you chatted with Pastor Van, conversations came to a natural end.

If there was trouble in town, or simply a contentious debate, Pastor Van worked quietly behind the scenes to offer commonsense advice tinged with a soft reminder that compassion is an important attribute. When tempers would flare over David Magadini, Great Barrington’s homeless-by-choice gadfly, Pastor Van was known to intercede on his behalf.

While many ministers typically occupy their time with sermons from the pulpit, committee meetings with congregants, and hospital visits, Pastor Van was seemingly everywhere — at nearly every high school athletic event and musical performance between Stockbridge and Sheffield, cheering on church teens and their classmates alike, knowing an uncanny number of them by name. He attended Annual Town Meeting like any other citizen, Chamber of Commerce events and was a member of Rotary. He opened up the church to numerous community groups across a wide spectrum, from Boy Scouts to recovering alcoholics.

Tributes to Pastor Van are as easy to come by as fireflies on a summer evening, and equally illuminating. Here is but a sampling:

“When I came to the Congregational Church 17 years ago, I was looking for acceptance, of who I was, and where I was in life. To my relief, there wasn’t any sort of religious litmus test, no religious doctrine being pushed. Pastor Van set that example in a way I’d never seen before.” — Chuck Hamilton, 69.

“We called Pastor Van at 3 AM and he came right over to read the last rites to my grandmother. He helped console me and listen to me. It’s nice to have someone in the community who cares, someone I can go to when I need him, but also just for fun. He’s a very good teacher of life lessons. Like how to be an active part of the community, how to treat others. He’s helped shape who I am, and I really like who I am.” — Nate Chase, 17.

“I was on the committee who selected him in ’86 as an interim pastor. You’re not supposed to hire the interim pastor, but he was so popular that we came to the conclusion that he was far and away the best choice. And in a way he was the community’s pastor, not just ours.” — Ray Murray, church member for 33 years

“He’s just a cut above, a pastor to everyone, not just our church. We he sees a need, he does what he can to take care of it, regardless of your denomination.” — Jeanne DuVall, member since 1982

“No matter your problem, he’ll say just the right thing to help, and he won’t sugarcoat it. He has that gift.” — Roberta Parry, baptized in the church in 1944

“He’s the pulse of Main Street. He knows so many people, their histories, what’s going on in town. He’s not a guy who wants to be a town leader, but who is anyway, in a very quite and gentle way, behind the scenes. And he’s so approachable. I’m going to miss him.” — Craig Okerstrom-Lang, local business owner

Pastor Van’s final Sunday Service was packed, so packed that he suggested the congregation take a photo of it and use it for advertising. Congregants, many in their Sunday best, sat serenely in the dappled light from the stained glass windows, families gathered to meet as a community, to worship together, and listen to the counsel of their beloved minister, a minister that frequently punctuates the solemnity of the occasion with a welcome dose of humor.

The service began with the usual welcomes, hymnal singing, and his children’s sermon, at which time small children approach the pulpit and sit beside him before heading off to Sunday school. This week’s sermon used shoes as a metaphor for religious life: a soul can become worn but can always be repaired.

He discussed he arrival 30 years ago after nursing his mother during her final days of cancer, the two of them having to navigate difficult terrain such as the need for him to bathe her. The church had just suffered the passing of its pastor. “I came looking for a job while grieving for my mother, and this congregation was grieving for its church. We helped one other through very difficult times, together. It was actually a good thing.”

Pastor Van then discussed three touchstones of his service to the community and why they were so important to him. Chief among them was burial.

His father was denied a religious burial by two churches — the Catholic Church, which he left to marry Charles’ Protestant mother, and the Protestant church he never joined. “With no one else to do it, the funeral director spoke,” Pastor Van said. “He didn’t know my father, never met him, and didn’t even speak with our family to learn about him. So he had nothing personal to say. It was a generic burial.” That experience left him with one very clear directive: “I will bury anyone in need of my services,” he said. “I will never allow anyone to go without a proper burial.” 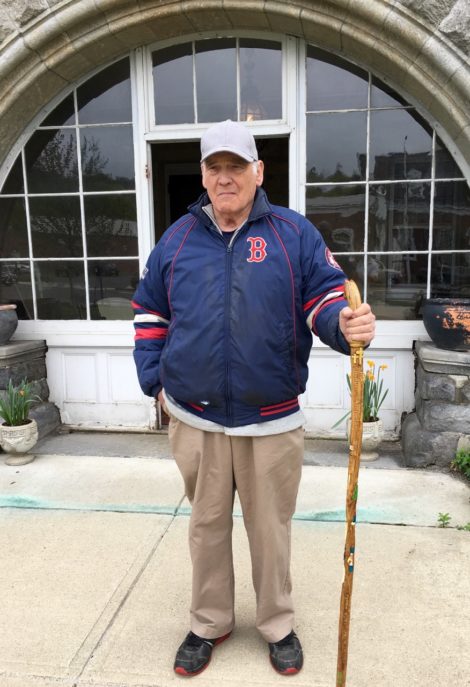 Pastor Van explained his commitment to area youth. “When I was young, teenagers were at best tolerated in church,” he said. “They were never mentioned in church news. I never understood that. I’ve worked very hard to celebrate our youth, making it a lifelong attempt of my ministry to reach out to them.”

Pastor Van’s open door policy also came from his dissatisfaction with the church of his youth. His minister at the time had a half-hour rule. “It didn’t matter if you were mid-sentence, or how serious your problem was. If the half-hour was up, he stopped you and ended the meeting.”

Although he remains an ordained minister, Pastor Van will now join the crowd of laity, once again Charles Van Ausdall, party of one. It’s likely most will address him as Pastor Van out of habit, perhaps out of respect for his service.

Meanwhile, an uncertain future beckons. He will move out of the old parsonage on Main Street, where he has lived for 30 years, greeting passersby and entertaining congregants. The home, beloved by his grandchildren, must be vacated by June. Without the benefit of a spouse, it already has a slightly cluttered feel, devoid of the soft decorative edges a bachelor might be blind to.

On the Monday after his final service Sunday, May 7, Mr. Van Ausdall was no longer dressed in his trademark white shirt and tie, but quite purposefully in a baggy Red Sox jacket and ball cap, the mystique of the ministry shed surprisingly quickly. He’s looking for a house now, maybe a farm — he’s not quite sure. And beyond that, he says, “I have no plans.”

While he’s not leaving the congregation, he won’t be advising them from the pulpit or his office anymore. Which is fine by him, he says, not altogether convincingly. “I think I’ve said everything I’ve wanted to say.”

— Joseph Brodsky
Read next: Pastor Van in his own words