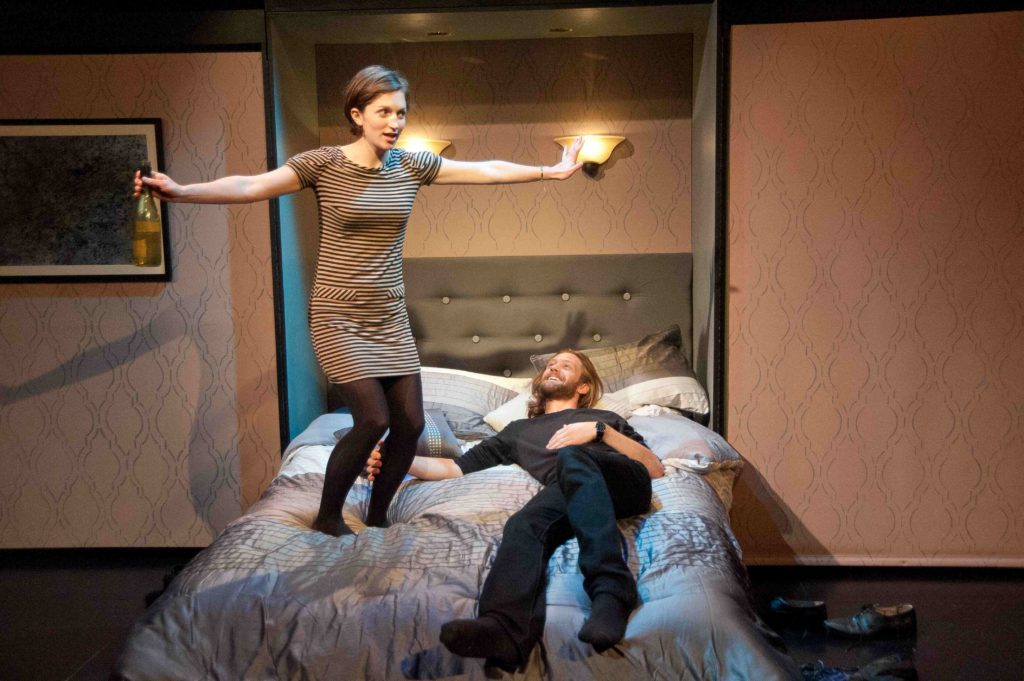 Part III: The making of a play, ‘Private Eyes’: Something happens

Editor’s Note: In Part I and Part II of “The making of a play,” Ann St. Clair recounted the planning and rehearsals of “Private Eyes,” now on stage at Shakespeare & Company. In Part III, it’s show time.

Lenox — Opening night of “Private Eyes.” The excitement of a theatrical first night never gets old. There’s a full house. The lobby is abuzz with anticipation. I notice that the furniture on-set is moved ever so slightly. And the by now familiar musical cues by Iain Fisher are more evocative than ever. I’ve brought a friend; we settle into our seats, and we’re thrown into Matthew (Luke Reed) and Lisa’s (Caroline Calkins) initial meeting in the rehearsal room.

Before I know it, the audience is roaring with laughter. The two young actors have never been so funny. And when the director/seducer Adrian (Marcus Kearns) begins his banter, I think my friend may never stop laughing. The pointed wit of the lines is easier to hear than in the Preview. Shakespeare & Company’s well respected crispness of delivery and voice projection serve us well in our seats. The first act ends with a near riot of physical comedy led by Matthew and Cory (Elizabeth ‘Lily’ Cardaropoli) stamping and dancing wildly on and off tables while Adrian and Lisa gasp and writhe on the floor.

No one seems to be arguing about reality or illusion in the lobby this time, or about the pros and cons of infidelity, entertained or acted on. They are, as Steven Dietz, the playwright planned it, having fun. But Act II begins with yet another telling of the love triangle tale. The psychiatrist named Frank breaks the fourth wall to give us her take on deceit and the cruelty of unfaithful lovers. We, the audience, having been addressed directly, are chastened. And I remember Jonathan Croy, the director of “Private Eyes” telling me in his interview a week ago how deeply he feels the underlying poignancy of the play, the sadness brought on by humans who seem always to find ways to ruin their own happiness and hurt themselves and others for the most fleeting of gains. 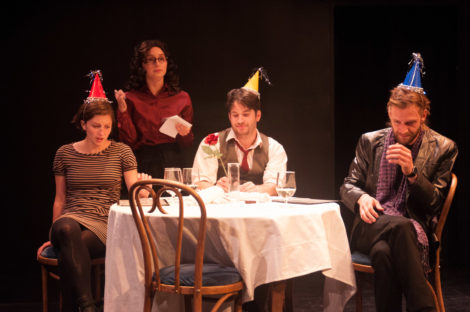 I am delighted at how much more alive and engaged the actors are than when I first saw them during the rigors of tech week. Caroline Calkins may look like the classic ingénue, but she is effectively quick tongued and sharp witted, and deeply affecting in her regret. Leonine Marcus Kearns nearly brings down the house when he gives his opinion of when it may be appropriate to tell the truth. Both of them squirm beautifully when they think they’re found out. If Luke Reed as Matthew seems a bit overly overwrought at times, he is, after all, playing an overwrought, and perhaps, overly imaginative character. But the three veterans of six months of playing “Romeo and Juliet” on tour and at The Mount show an exhilarating range of expanding ability. ‘Lily’ makes us accept the many disguises of her character, and Lori Evans at her best puts a stop to our over-the-top revelry without being preachy. 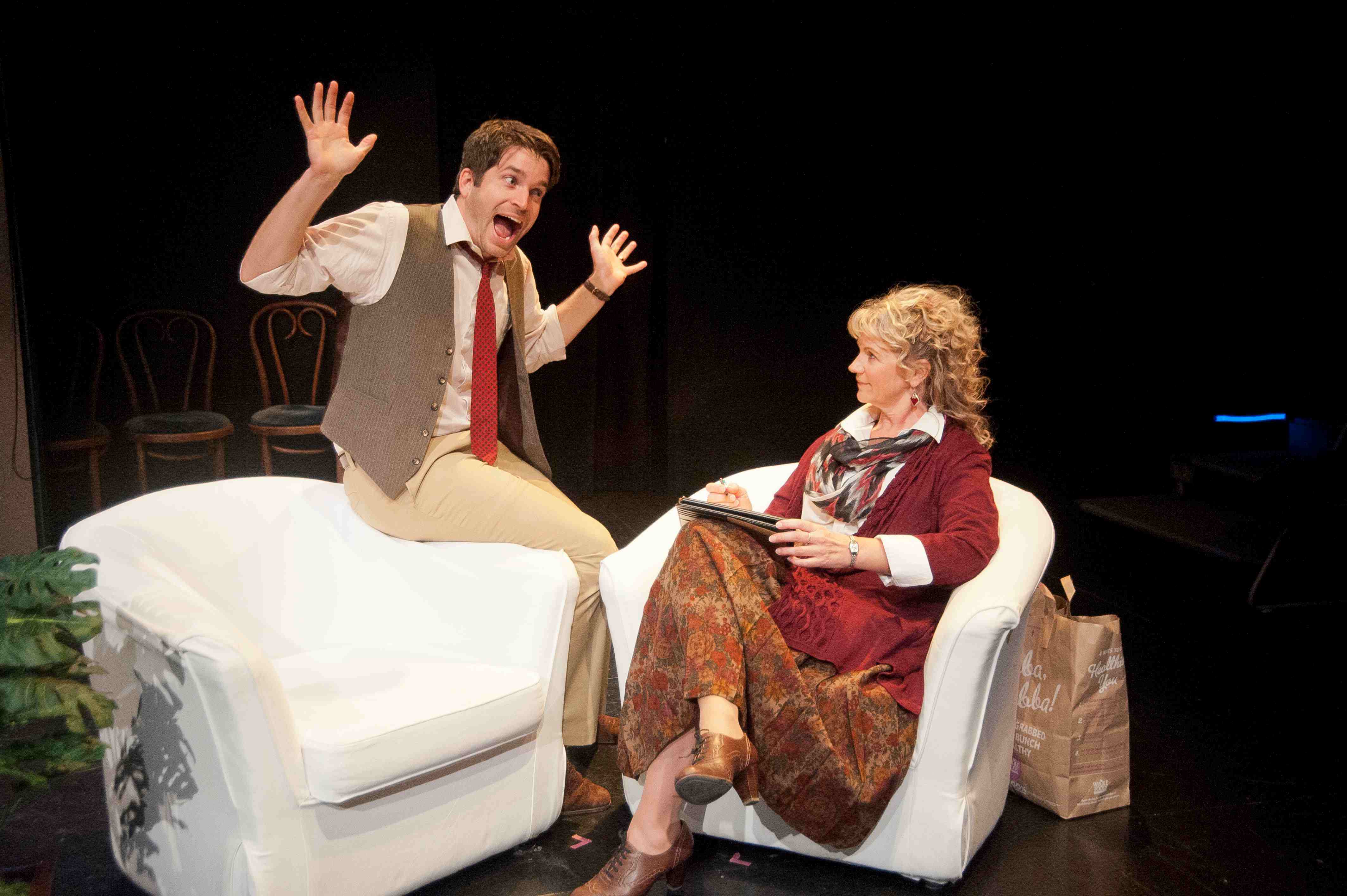 Jonathan Croy has bought out the best in this new generation of players and in the newer members of the company. Lori Evans, who plays Frank, is making her first appearance with the group, and ‘Lily’ Cardaropoli is making her mark in her initial season. One of Dietz’s most effective and interesting devices, nicely delivered by the cast, is the repetition of the same lines by different characters in differing situations. Who, after all, has not dissembled in similar ways? Or perhaps said some of those exact lines? By the closing moments of “Private Eyes,” the opening night audience acknowledges these familiar words with audible “ahhs.”

Patrick Brennan’s set is more accommodating than before, more able to finesse the elongated sight lines of the black box he’s working in. A rehearsal hall, a shrink’s office, a restaurant and its kitchen, and the hotel room where we glimpse the fall are easy to see and not see in the magical dark. Robyn Warfield has led us through all the physical and emotional changes with excellent lighting. My friend nudges me about Govane Lohbauer’s “great costumes,” clothes that capture the spirit of the 1990’s. “Private Eyes” is a thoughtful, entertaining romp with a lingering kick. Caught up in the hows, wheres, and ifs of the lovers’ affair (real or imagined) is the unanswerable question: Why? And each human being in the house must try to answer that one for her or himself.

For a fine experience in very live theatre, you may call the Shakespeare & Company box office at 413-637-3353, go online to Shakespeare.org, or refer to The Berkshire Edge calendar. “Private Eyes” plays every weekend through November 9 at the Elayne P. Bernstein Theatre on Kemble Street in Lenox.

— Joseph Brodsky
Read next: There are viable alternatives for high school renovation