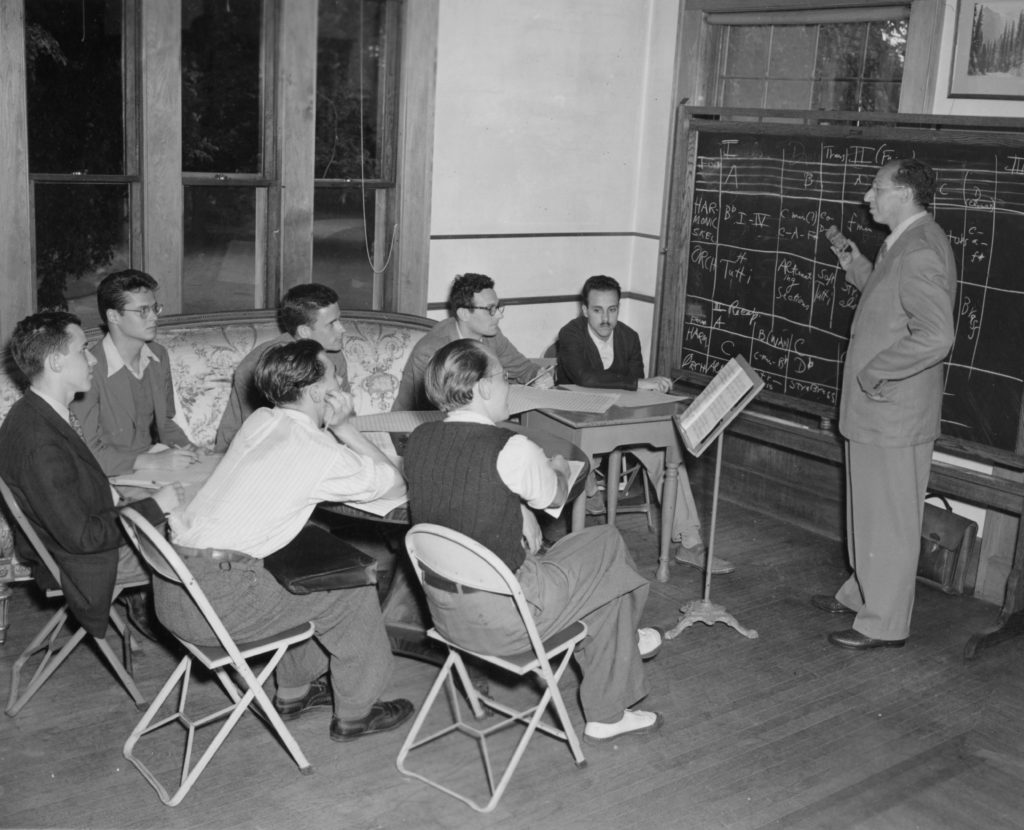 Courtesy of Boston Symphony Orchestra
Standing by a chalkboard with eraser in hand Aaron Copland provides a harmonic analysis of a piece of music for a group of seated Tanglewood composition students.

Editor’s Note: The summer of 2015 marks the 75th anniversary of the Tanglewood Music Center, the Boston Symphony Orchestra’s acclaimed academy of advanced musical study founded by Serge Koussevitzky. In celebration of this event, we are running four sections from the chapter “Early Days of the Berkshire Music Festival (as the TMC was called in those days) from Peggy Daniel’s book, Tanglewood A Group Memoir. To read Part I of this series, please click here.

July 8, 1940 – The great day had arrived. formal “Opening Exercises” of the Berkshire Music Center were held that afternoon in the Shed. Koussevitzky’s moving speech to the assembled students and dignitaries reflects not only the idealistic spirit that was going to play such a crucial role at the Center, but underlining this spirit was the chilling fear of what Hitler’s rampage across Europe would mean for Western culture: 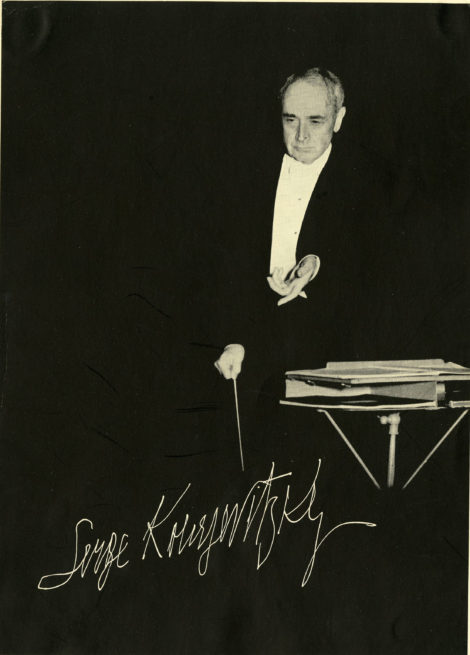 “The creation of a music center in America becomes more significant in these days than in any other time. For, indeed, so long as culture and art exist, there is hope for humanity; and all those who believe in the values and inheritance of culture and art should stand in the front rank. If there ever was a time to speak of music, it is now, in the New World.

“Therefore, our feeling of appreciation and gratitude goes to the Board of Trustees of the Boston Symphony Orchestra, and especially to Mr. Dane, our President, for their deep understanding of the significance of a Music Center in America, and for helping to materialize the idea.

“It is easier to conceive an idea than to bring it to existence. My vision of a Music Center is of long standing. In 1913 and 14, in a quiet, residential part of Moscow, I first contemplated a Center of every branch of musical art. The assistance of great artists and brilliant minds of that epoch had been secured. Then came the world war and the Russian Revolution of 1917.

“Only in America, many years later, when I became conductor of the Boston Symphony Orchestra, did I return to my life-long dream. I felt that a Music Center in this country was not only possible, but definitely, absolutely necessary.

“So the question was: how could it be materialized?

“The first hope came in 1929, when I was asked by Mrs. Eugene Meyer to start a Music and Educational Center in White Plains, New York, but the Depression set in bringing a final stop to all further plans.

“In 1936, Miss Robinson Smith, President of the Berkshire Music Festival, asked the Boston Symphony Orchestra and myself to participate in their summer Festival. I explained to Miss Robinson Smith that my idea was to create a great Music Festival of a National, and even International Scope. Our first Festival was started; and a year later, Mrs. Gorham Brooks offered her beautiful family estate ‘Tanglewood’ as a permanent home for the Festival.

“It is then and there that my dream of a Music Center was revived.

“At a meeting with the Trustees of the Boston Symphony Orchestra, I spoke of my vision of a Music Center, its meaning in American life and its influence on the arts and culture of this country. I shall never forget the words said by our President, Mr. Dane, when I unfolded my plan: ‘Go ahead, we cannot afford to lose it.’

“The support of the President and Trustees of the Boston Symphony Orchestra; the support of the Rockefeller and Carnegie Foundations, ASCAP and other great American Institution prove the National significance of our undertaking.

“Today, the ground is set and we lay the cornerstone of the Berkshire Music Center. I look into its future with faith and confidence. 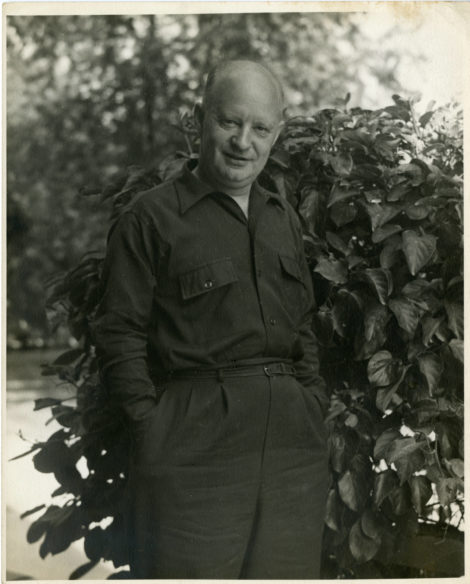 Paul Hindemith stands by some foliage on the Tanglewood grounds. Photo: Courtesy of Boston Symphony Orchestra.

“My confidence is also justified by the splendid work on the part of our collaborators. I want to thank Mr. [George] Judd, our manager, for his invaluable assistance; and Dr. Margaret Grant, Secretary of the Center, for her devotion to our common tasks and ideals.

“We feel it our duty to hand down the old treasures of Musical Culture to American Youth. Enriched by this culture, the Young People of America will carry it further to new achievement.”

After Dr. Koussevitzky’s speech, the students and faculty made music together for the first time. Randall Thompson’s Alleluia had been especially composed for the occasion and to this day remains a revered Tanglewood tradition, sung at the end of every Music Center Opening Exercises. Wallace Woodworth, conductor of choral music at Harvard and lecturer for many years at the Berkshire Music Center, described the proceedings in a 1948 BSO program note:

“When Dr. Koussevitzky was arranging for the opening exercises of the first summer of the Berkshire Music Center, he turned to Randall Thompson for a new choral work, written especially for the occasion. 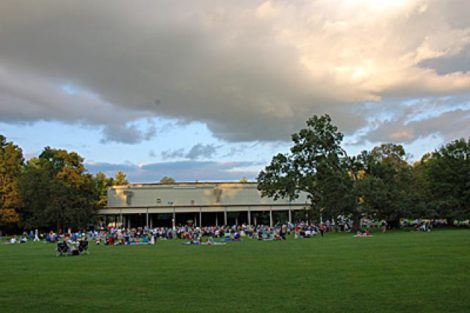 “In May or early June of 1940, Dr. Koussevitzky and I met to discuss the program for the formal Opening Exercises of the first session of the Berkshire Music Center. Clearly there would be speeches and an inaugural address by the Director – but what about music? I suggested a classical overture or symphony by the twenty or thirty faculty members from the Boston Symphony Orchestra. ‘No,’ said Dr. Koussevitzky, ‘The whole school must participate, every member – it is their own opening session.’

“I suggested two or three of the noblest Bach chorales as fitting and, above all, practicable for the occasion. But I had not reckoned with Dr. Koussevitzky’s imagination. ‘Bach would be fine, but we are an AMERICAN music center, and a new one! We must have a new work, especially for the occasion. I will ask Randall Thompson.’ With only three weeks to write the music, Mr. Thompson accepted.

“On Saturday, forty-eight hours before the formal opening, we had not heard from Thompson nor seen the music. Mr. Judd telephoned to Philadelphia; Thompson assured us that the score had just been printed and that three hundred copies would arrive in Lenox Monday morning.

“At two o’clock on Monday afternoon the students assembled for the first time. In the corner of the barn I had secreted our collection of Bach chorales, for one mail after another had arrived at the Lenox post office during the morning without the package from Philadelphia. But at just five minutes before two, Mr. Judd came in with the music. I tried it over once on the piano, and the chorus of two hundred and fifty, assembled from all over our country for the first time, went to work. By 2:45 it was time to go to the Shed for the exercises, and at 3:30 we had given the first performance of a work which has been heard hundreds of times in choral concerts from Boston to San Francisco. So sure was Thompson’s technique, so expert his craftsmanship, and so masterly his grasp of the true genius of choral singing, that despite a blueprint of unique limitations, he had created one of the noblest pieces of choral music in the twentieth century.”

Randall Thompson gives his own account of the Berkshire Music Center in this letter to his friends, the composer Douglas Moore and his wife while on vacation in Encampment, Wyoming:

“If I was one day late in visiting you, it was as nothing compared to the time I have taken to send you formal thanks for a lovely visit. Without that all-too-brief interlude I doubt whether I’d have pulled through the past month. I felt sorry for Douglas, with a movie score to write under such pressure, and no sooner did I get back to Phila. than a similar pressure descended on me. Thank heavens for the breather with you two.

“First, [Alfred] Wallenstein rang up and wanted an orchestral score for Americana. Then Koussevitzky sent word he’d like a choral piece for the opening exercises of the Berkshire Music Center. Americana ran to 65 pages of scoring. Then I saw Margaret and three of the children off for Wyoming, went home and began the choral piece. It had to be of a kind that would fit a Solemn Occasion, and that could be performed after one rehearsal on the first day of the school. I enclosed a copy of what I turned out.

“On July 5, I turned the piece over to the lithographer and left for a long weekend at the Reiners’ in Westport. I then returned to Bryn Mawr long enough to close the house and get Varney and head for the Berkshires. There I gave 5 lectures and fell swooning onto the train for the West! 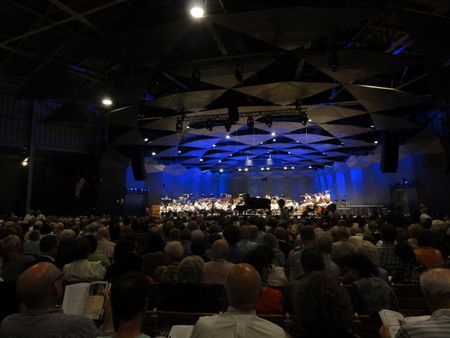 “The music center is truly marvelous — heavenly country and such a fine group of students and teachers. I was there the first week but already the place had such spirit and atmosphere. Most congenial, and stimulating to a degree. My Alleluia had been sung to perfection at the opening exercises, so my entrance into the place two days later was not so awkward as it might have been. I went to several of the Institute (“professional” students) Orchestra rehearsals, which gave its first concert on Friday night of the first week, opening (if you please) with a certain E minor Symph. Led by Leonard Bernstein, student from C.I.M. [Curtis Institute of Music] I confess I enjoyed this privilege because it was really a fine performance. Most of all I relished watching Koussevitzky sit directly behind the student conductors at all rehearsals, criticizing them at every turn. He has proved himself a fine teacher and – still more surprising – a most skillful administrator of the school. His outlook is very broad and he seeks at every turn to do equal justice to the professional and non-professional students. There is no doubt in my mind that he has come out with a permanent institution of the greatest value and importance. It preserved the best in Mr. Surette’s Summer School, with an added plus of a fine performing group, the presence of members of the B.S.O. and facilities of all kinds – little operas, masques, plays, large choral works, and a situation that is simply beautiful. You must go up, and so must the Giddings.

— Grandma Moses
Read next: AT TANGLEWOOD: The anonymous Yo-Yo Ma