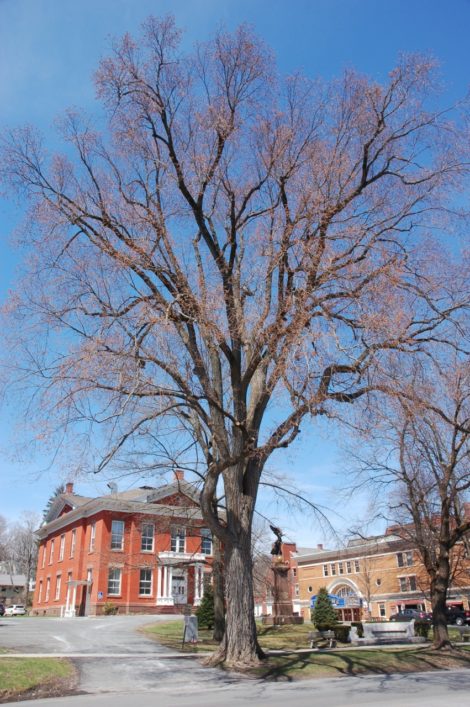 This venerable elm in front of the Great Barrington Town Hall symbolizes respect for the species of trees that have historically graced Main Street and will again once the 81 new trees are planted as part of the Main Street Reconstruction Project.

While strolling on Main Street in Great Barrington on a flawless May day, my heart sank a tad. By this time next year, these flowering pear trees before me will be gone, I mused. But suddenly before me, in my mind’s eye, was a consolation. Other and more diverse trees will be taking their place. In fact, 81 trees will be planted from Taconic Avenue to Cottage Street, more than doubling the number of trees that currently border Main Street and will be removed during reconstruction.

Picking up where I left off in Part 1, let me provide a brief history of the former generations of trees that made the Main Street allée, from traditional American elms to flowering crab apples to, more recently, the “Bradford” pears we currently have. I wanted to know what awaited us.

Those I interviewed all agreed that any monoculture, especially urban, while quite elegant, is unsustainable on a long-term basis. As Dennis Gibbons, the town’s Tree Committee’s chair, pointed out: “The pears also had inherent structural problems, were poorly planted and poorly pruned from the get-go.” (As I later learned they are now on the invasive plant list.)

More than five years ago, the town embarked on its “Main Street Reconstruction Project,” the $5.4 million project that is about to get underway this summer and fall and is funded by Mass DOT (Department of Transportation). The mission: To restore and improve the town’s underground infrastructure, streets, sidewalks, pedestrian crosswalks, parking and lighting. A bike path was also considered.

An important theme soon emerged. How would the town both preserve and enhance its distinctive identity with an appropriate and attractive streetscape? This is where trees, a crucial component of good urban planning, come in. After much research — including a public tree inventory — a professional landscape design, plant list and budget were proposed. The budget came to roughly $80,000 or 16 percent of the total renovation budget.

In 2009, along with Tom Ingersoll, an arborist, the Ashfield-based landscape architecture firm, Walter Cudnohufsky & Associates was hired. Meetings took place with town and state officials, engineers, business owners and residents. I vividly recall a brainstorming session where Walt Cudnohufsky proceeded to draw up on a large board an extensive list of concerns, ideas and suggestions from the public. Town democracy at its best.

Together, Charles (Chuck) Schnell from the Cudnohufsky firm and Ingersoll began drawing up a design and planting plan.

“The direction we took grew out of the early public discussions,” explained Schnell to me recently. “DOT’s plan was simply for another monoculture; it was quickly knocked down.”

“They even wanted to put back rows of crab apples,” quipped Craig Okerstrom-Lang, a landscape architect and previous chair of the ad hoc tree committee that was actively involved in the process in the beginning. “Why repeat mistakes of the past?” he added. Of course, many challenges, (and not only in the choice of trees), awaited.

“We had a very productive back-and-forth discussion about how to proceed,” according to Schnell.

(I must add, however, that others I interviewed decried communication issues between the former town manager and those committed to working on the project. Fortunately, that’s no longer the case.) 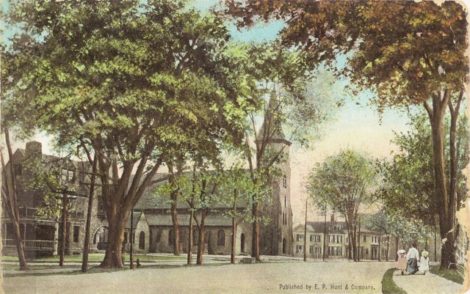 This historic rendering shows the variety of trees that once bordered Main Street and which the reconstruction project intends to replicate.

Schnell insists his team had been given “a wonderful opportunity to bring a more dynamic look to the downtown.” As Dennis Gibbons, the current chair of the tree committee explained, the resulting design “focuses on a multi-layered canopy; monoculture is out. The goal is to have a diversified urban forest.”

“For the array of Main Street trees to be truly successful, cooperation between public and private property owners is essential. When this collective green space is thought of as part of the larger Main Street experience the opportunity exists to vastly improve the downtown experience for everyone,” Schnell pointed out.

As it turns out, this more “dynamic look” has an eclectic feel to it — which, in my opinion, is in keeping with the town’s persona. Not only will there be a mix of tree species but a “gateway” of tall specimen trees at both the south and north end of Main Street. Here, people will be greeted by American elms, in this case, disease resistant cultivars. One of the priorities in the plan was not only to use native species but also to connect the town to its history. Still today, a stately, historic elm that has survived since pre-Civil War times stands in front of Town Hall. Another is an old specimen sugar maple by St. James Church. Preserving these landmark trees along with others, such as a large sycamore along Route 7 to the north, has been a priority for years.

Okerstrom-Lang does not hide his enthusiasm for what is in store, And this is in spite of what made for “a long series of compromises.”

“These gateways provide us with cathedral canopy trees,” he maintains.

He’s also enthusiastic about what he calls, “the showcase blocks that will feature smaller, more to scale columnar trees, such as one stem shads (Amelanchier) and tree lilacs.” Key street corners will showcase larger trees. Diversity along with repetition, even in some places “mini-allées,” form the design guidelines.

Emphasized by those I interviewed is the need to ensure that buildings with particular architectural interest as well as historically registered ones such as the First Congregational Church, remain prominent visually. Not blocking second floor windows of what Okerstrom-Lang called “the street wall architecture” is also paramount.

So, which trees make the grade? The list is long and features 17 different species. When it comes to incorporating elms in the plan— as well as preserving existing traditional ones—a key advisor was Tom Zetterstrom, a long-term advocate of these noble, signature trees. Towns such as Millerton, N.Y. and Canaan, Conn., and even Shephardstown, W. Va., among many, have adopted many of his suggestions for proven disease resistant cultivars, with evocative names such as Jefferson, New Harmony and Princeton. In Washington, D.C., particularly, on the National Mall, more than 2,250 elms are now in sight.

Of course, GB is not D.C. but, as it turns out, flowering Japanese cherries such as the Sargent, a favorite of Dennis Mareb of Windy Hill Nursery, and Snow Goose will also be featured, making for a total of 22. And, in maintaining a certain tradition for GB, even a few pears (Aristocrat, a better cultivar), as well as, yes, crab apples that once flanked Main Street, will once again return in a few spots. However, let’s not forget that these fruit trees require much maintenance and do not last forever.

An additional priority was to feature native species, not only shads and elms but also Red maples, American hornbeams, American yellowwoods, and oaks, among others. Landscape designers, city planners and arborists all agree that due to climate change and diseases caused by creatures such as the wooly adelgid and Emerald ash borer, diversification is paramount. Hence, other types of specimen tree, in this case the beautiful and well-adapted Japanese Katsura, will be placed in key locations. Call it an “insurance policy.”

We are already very fortunate to have a wonderful downtown experience; hopefully, with good foresight and proper execution, this will make the experience even better and safer. No more downed branches or messy, slippery crab apple fruits by store front entrances.

— Grandma Moses
Read next: No Barns. No Trucks. No Chickens: An interview with the Southfield painter, Joby Baker