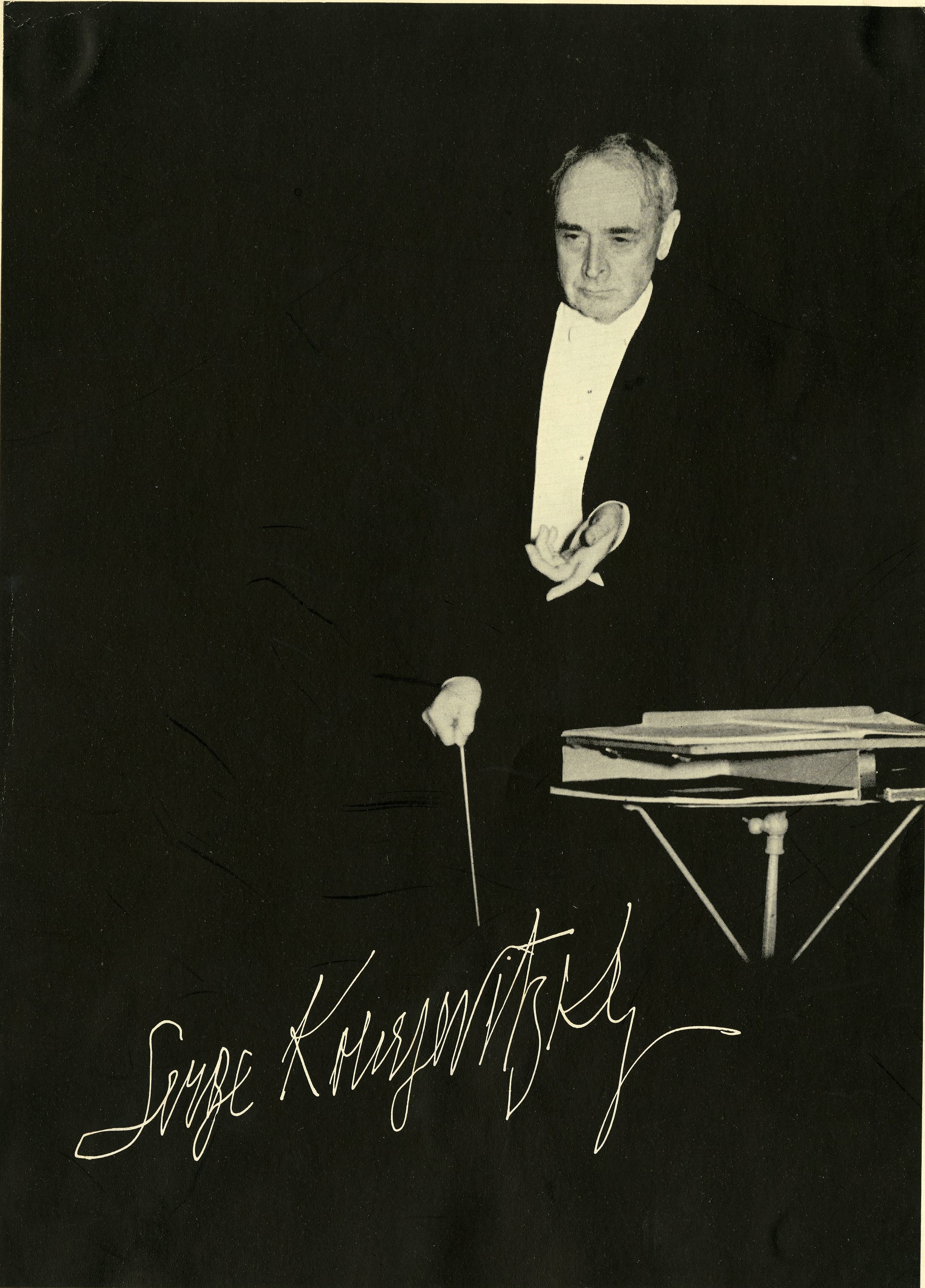 Editor’s Note: The summer of 2015 marks the 75th anniversary of the Tanglewood Music Center, the Boston Symphony Orchestra’s acclaimed academy of advanced musical study founded by Serge Koussevitzky. The TMC has played a key teaching role in preparing its Fellows for a future life in music. Many of the most renowned classical music figures of the 20th and 21st centuries have studied there. Leonard Bernstein and Lukas Foss were members of the inaugural class in conducting and Aaron Copland and Paul Hindemith were the first teachers of composition. According to the best available figures, 20 percent of the members of American symphony orchestras and 30 percent of all first-chair players have studied at the TMC. In celebration of this event, we are running four sections from the chapter “Early Days of the Berkshire Music Festival (as the TMC was called in those days) from Peggy Daniel’s book, “Tanglewood: A Group Memoir.”

Koussevitzky was one of the most esteemed conductors of his time. Known for his impassioned symphonic interpretations, his charismatic posture on and off the podium and his taste for the newest in music, who would have thought that one of his most cherished ambitions would be to start a school? Not just a conservatory, but, as Aaron Copland would later describe it so perfectly, …a summer school under the aegis of a symphony orchestra. No one had ever before heard of such a thing. But it was the dream of our former director to find some tangible way for the older and more experienced musicians to pass on a lifetime of experience to the young aspirant. Here talented young musicians might gather to engage in all kinds of ensemble playing and singing. Their very presence was to act as a stimulus among themselves and also to their teachers. Before long the plan was enlarged to include the departments of opera production, composition, and the study of the art of conducting. Beyond this – and here was a special love of Dr. Koussevitzky – a division of the school was to be set up for the musical enthusiast who wanted to spend a summer of “living and working in music.”

But before he could realize his dream, Koussevitzky first had to convince the Boston Symphony Trustees, not famous for undertaking risky and expensive educational ventures, that their orchestra had an obligation to the future of music in America. This 1939 speech, “Vision of a Music Center,” was Koussevitzky’s official communication to them of his plans.

“Throughout my life,” he stated, “I have envisioned the establishment of a great music and art center in the world. The United States of America can and are destined to have such a center. American freedom is the best soil for it. Rapid growth of American culture dictates its necessity, as a crowning peak of its unfolding, as a historical mission and perennial contribution of human art and culture.

“We contemplate to establish an Academy of Music and Art as a permanent institution. It has to be the Creative Musical Center where the greatest living composers will teach the art of composition; the greatest virtuosi the art of perfect performance and technique; the greatest conductors, the mystery of conducting orchestras and choruses. The most eminent thinkers and scholars will be teaching there, each in his field so far as it concerns art and music: musicologists; art psychologists and sociologists; art historians and philosophers. A free cooperation of such an elite shall certainly result into a creation of new and great values of art; into radiation of the beams of high culture over a nation and the whole world; and finally into education and training of a new generation of American artists… Such an institution will be, no doubt, unique and far greater than any similar institutions existing.

“The central idea of our short summer work will be INTERPRETATION. You know that the art of interpretation is still very young. To attain perfection in interpretation will be our special aim… Our problem is to help artists with good training and knowledge to acquire a penetrating and vivid conception of the music they interpret; to stir their imagination to new heights and new depths, because imagination evokes in the interpreter the right intuition and emotions to conceive the inner meaning of the score and to reveal the emotion of the composer.

The Boston Symphony Trustees — albeit, somewhat reluctantly — went along with Koussevitzky’s plan. However, one Trustee, Jerome D. Greene, was a particular enthusiast. He went out of his way to secure a grant of $60,000 from the Rockefeller Foundation where his friend, Raymond B. Fosdick, was president. A big infusion of money from the Foundation would, Green reasoned, go a long way to solidly establish the school in its initial two years.

Dr. David H. Stevens was the Foundation’s program officer who shepherded the funding through the hierarchy. His November 15, 1939 report to Mr. Fosdick would prove prescient in its understanding of the coming importance of Koussevitzky’s dream.

Re: Berkshire Music Festival and School

“Mr. Judd, Manager, and Director Koussevitzky of the Boston Symphony Orchestra have gone far in establishing a plan for a six-weeks school in connection with the Berkshire Music Festival. They have been ably assisted by Mr. Jerome Greene, one of the Trustees of the Symphony. The Symphony organization proposes to accept responsibility for the School and to recruit directors and lecturers from Harvard University and from New York City … Counted important that at least 3 schools (Juilliard, Curtis and Eastman) endorse the plan heartily as outlet for their better students and graduates. The preliminary canvass produced 250 inquiries. It is sure that not less than that number will be available, and rigid selection probably would be needed in 2 or 3 years to keep the enrollment at 400 …

“Immediacy of the report. The Director [Koussevitzky] has recognized American composers to a degree found nowhere else in the country. The last pages of the attached announcement for 1939-40 has a record of works by American composers given first productions by the Symphony since October 1924. The concerts in New York this coming week are wholly American. The Negro singer, Miss (Dorothy) Maynor, making her debut on November 19 at Town Hall, owes her advance into public notice entirely to the Director. She was one of a large number given auditions during the Festival season of 1939, and this autumn sang in Boston under Symphony sponsorship.

“The Director has unqualified enthusiasm over the present position of American music in its creative phases of growth. He says that this country not only is the only one with life but is at the peak of a growing power in creative writing and production. He of course would give prestige to the School and would devote all his energies to it. Undoubtedly as the time comes for division of his burden during the regular season, he will put more time on the summer plans and on constant advice to younger writers and directors… This is true also of the younger directors [i.e. student conductors], who will have personal instruction by Koussevitzky and a chance to direct under his observation.

“The hope of the persons behind the plan is for at least two years of backing at the level of $25,000 a year. Then the plan would be scrutinized to see whether a tapering grant is essential.”

Mr. Greene sent his own pitch letter to the Foundation on November 17th:

“Mr. Judd has sent me a copy of his letter containing the formidable list of documents with which you have been supplied. I do hope that Raymond Fosdick, and the officers generally, will feel that our plans for the Berkshire Music Center present a really strategic opportunity for a splendid reinforcement not only of the growing interest in music, which is such a remarkable phenomenon, but also of our efforts to identify that movement with the highest standards of the art.

“Excellency in any art must always be comparatively rare, but the existence of standards may mean all the difference between a popular and contented mediocrity and the constant struggle for excellence which art should inspire. The encouragement of young composers and the creation of a Koussevitzky school of picked conductors will also provide indispensable elements of musical progress.

“Fortunately, Dr. Koussevitzky does not himself embody Lowell’s ‘certain condescension in foreigners.’ Perhaps he is too sanguine, but how much greater his influence will be on young musicians if his work is inspired by optimism, rather than by conceiving his task as that of teaching the elements of civilization to American barbarians.

“I am happy to report, and this is really the only excuse for my present effusion which adds nothing to what you already know of our plans and hopes, that the Trustees of the Berkshire Festival, at their meeting this week, voted to accept the three weeks’ Festival with continued responsibility for financing that part of our programme under the present contract. The resulting combination of Boston Symphony control of the entire programme with civic interest and responsibility in promoting attendance seems to me to ensure the two complementary elements of cooperation which an enterprise of this kind ought to have.”

Next: In the next installment the Berkshire Music Center opens in the grand manner.