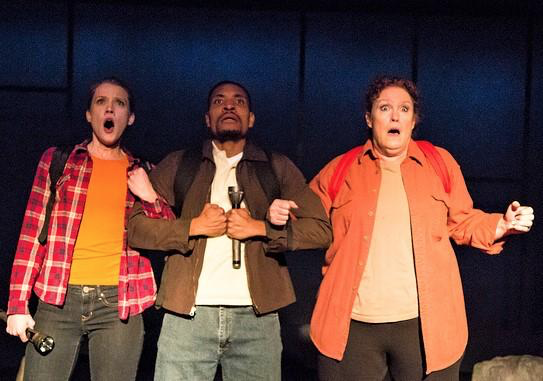 There is a real wealth of talent here in the Berkshires, and I’m not only talking about our stalwart snowplow drivers! Although let me be clear, those folks can really rock the rock salt. What I am referring to is the vast amount of playwriting talent there is in this area. We have plays in development, plays and musicals in production, and some that are being written at this very moment! All penned by your Berkshire neighbors. As a playwright myself I’m always curious about where playwrights get their inspiration, what their writing process is like and who they are in our community. Below, I hope to introduce you to—or re-introduce you to—three local playwrights and conversations I’ve had with them about some of these questions. In the second part of this series I’ll discuss the work of three other local playwrights.

Liv Cummins lives in our bucolic Town of Lee, Mass. She is a graduate of the NYU Tisch Graduate Musical Theatre Writing Program, one of the most prestigious of its kind in the country. Up until a few years ago, the program was run by the talented Sarah Schlesinger, a part-time Berkshire resident of South Egremont. The faculty at the NYU Graduate Musical Theatre Writing Program is a phenomenal collection of working composers and book writers of today’s musical theater. Once, at Sarah’s invitation, I had the pleasure of sitting in on a master class taught by Rachel Sheinkin (Tony Award for Best Book for a Musical for “The 25thAnnual Putnam County Spelling Bee”). The class focused on storytelling, and each of the students had to tell their stories using only puppets. It sounds a bit odd, even wacky, but it was just fascinating to watch these grad students tell their stories in a very different way than they’d ever imagined. Brilliant. Bill Finn (from Barrington Stage) has also been on the faculty there for several years.

Liv Cummins has written the book and lyrics for several musicals produced across the country. Most notably, her musical “Vanishing Point,” co-written with Robert Hartmann and Scott Keys—which explores the lives and disappearances of Amelia Earhart, Aimee Semple-McPherson, and Agatha Christie—has had multiple productions at theaters and universities across the country and internationally. Most recently, it premiered at the Seattle Public Theater in February, 2018. In 2014, New York City’s famed 54 Below club presented a concert version featuring Broadway stars Farah Alvin, Kate Shindle and Katie Thompson.

Liv’s new project—one that she’s currently writing with her collaborator Robert Hartmann—sounds really fun and timely. It’s a musical called “Ladies, How Dare You!” It’s about two suffragettes on the way to a big Washington D.C. women’s march in 1913. (Yes, that happened!) They get lost along the way and have to rely on the kindness of strangers. Hilarity ensues! Keep in mind that women were only given the right to vote in 1920, and hopefully the show will be ready to explode onto the scene next summer to celebrate the Centennial Celebration of that event. Because — let’s face it, folks (as this married guy already knows) — women should indeed be running the world as the (ahem) other gender seems to have it bungled it up pretty effectively.

You may have also seen Liv’s live comedy/variety show Saturday Night LIV, a cross between the Ed Sullivan Show and SNL. She’s been a member of the theater faculty at Lesley University in Cambridge, Mass., since 2007. 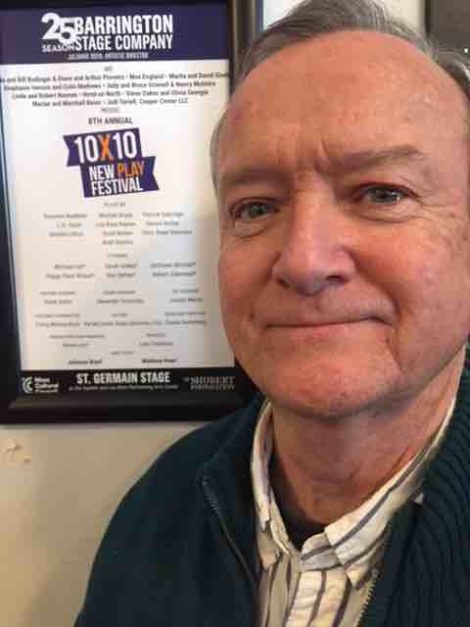 Michael Brady is a playwright who is now, after having spent many years in New York, experiencing a career renaissance in the Berkshires. He and his wife Patricia Jacobsen-Brady reside in lovely Southfield, Mass. Michael runs Berkshire Voices, Berkshire Playwrights Lab’s on-going workshop for local playwrights in which they read each other’s plays and offer insight and constructive criticism. His play “Pipeline” is currently featured in Barrington Stage Company’s 10X10 New Play Festival running through March 10thin Pittsfield. (Ticketing information below)

I asked Michael about his process as a writer.

Well, the whole thing is a mystery to me, to be honest. And from what I see in the group, it’s a mystery pretty much for everyone. I don’t think I have ‘themes as such. But I do write about family dynamics, emotions, things that draw people together or push them apart. “Pipeline”was a different experience for me, less about the imagination than about a memory from my own life, something I lived through many years ago, of people willing to put themselves on the line for their beliefs. In general, in order to write I have to get into a state where my subconscious is more free, a kind of drift. Then something might come to me, a bit of dialogue, a visual, the “optic” of some action. Then I just try to keep my rational self out of the way and let all that bubble up. I might write a scene three or more times, trying to tease out something of value. The whole thing is a mystery. You just hope you get lucky once in a while.

If you haven’t seen it, here’s what Peter Bergman wrote in his review of Michael’s recent play, “Pipeline” (excerpted here) from The Berkshire Edge:

The play “Pipeline” written by Michael Brady, directed by Julianne Boyd and starring Sarah Goeke, DeShawn Mitchell and Peggy Pharr Wilson, is utterly moving and effective as three exuberant protestors on the edge of a mountain forest in south Berkshire County are confronted by an actual moment of disaster. You literally stagger from your seat at the start of the intermission, deeply affected by the play.

Michael’s play “To Gillian on Her 37th Birthday”was developed by The Ensemble Studio Theatre, presented at New York’s Circle in the Square Theater, and later produced as a film by Sony Pictures starring Peter Gallagher. Michael has also had several plays in development with Berkshire Playwrights Lab over the past few years: Titles, “The Season” and “Green Tiger Seven.” His play “Semper Fi” was produced at Gloucester Stage Company.

Emily DeVoti’s another playwright here in the Berkshires. Her play “Beyond the Veil,” an imagined meeting between W.E.B. Du Bois, Henry James and Edith Wharton, staged by Shakespeare and Co., just kicked off the 2019 Du Bois Legacy Festival to a full house at the Mahaiwe. The Mount and Shakespeare & Co. will collaborate to present another staged reading of the play this coming summer. (Summer! Does it really exist?) Emily is a Sheffield native who, after several years in the big city, is back living with her husband and young son in Great Barrington.

Emily started working on the Du Bois play more than 20 years ago with Vincent Dowling, the founder and artistic director of the Miniature Theater of Chester, long before the Byam Stevens and Daniel Kramer tenures. I can’t say I’ve ever met Vincent but I’ve heard him on the radio on occasion bantering with Alan Chartok. While Emily was working with Vincent, she was writing the stage adaptation of “The Turn of the Screw” for Shakespeare & Company, while Shake & Co was in residence at The Mount, way back in 1995.

I asked Emily why she’d started to write about Du Bois so many years ago:

I grew up in Sheffield, but I never learned about W.E.B. Du Bois in the local schools—I didn’t read him until I was a freshman at Princeton, and “The Souls of Black Folk”was at the top of my reading list for an intro to American Studies class. I read the book in amazement—here was my home being spoken of, so eloquently, and here too was Du Bois being honored at a top institution of learning. Why had I never heard of him until now? Edith Wharton, Herman Melville, William Cullen Bryant, Samuel Chester French, these cultural figures were celebrated in the Berkshires, but why not Du Bois?

The question burned in my mind. So, I put them in a room together. I chose Edith Wharton and Henry James, because Henry’s brother William James was Du Bois’s mentor at Harvard. But the play also includes white people from their social world, because I wanted Wharton to have to face Du Bois in the open, among Wharton’s social peers; there are also two black servants, to represent where Du Bois came from. Du Bois was a pioneer, and people who said they simply didn’t know black people because of the class divide suddenly didn’t have that excuse anymore. It’s a play about this, about entrenched racism, and about white discomfort. Unfortunately, it really resonates right now.”

This article is the first of two articles on local playwrights.