Mount Greylock State Reservation
The Hopper of Mount Greylock, from a panorama postcard circa 1900. In 1964, the Mount Greylock Tramway Authority planned to build the world's longest aerial tramway from the base to the summit.

Part I. Big, bad things that never came to pass: A short history of environmental activism in the Berkshires

Editor’s Note: As the Environmental Protection Agency offers its remedy to remove PCB contamination from the Housatonic River, from Lenox to the Connecticut River — a cleanup that would never have occurred without a dedicated band of environmental activists — it is a good time to reflect on the Berkshire tradition of guarding the integrity of the landscape and the land. This is the first in a series of articles on environmental activism that, from post-Colonial days, has sought to protect the Berkshires from the worst of predatory industrial and development schemes.

Few now remember Lucretia Williams, who in 1790 saved the great Elm tree at the center of Pittsfield, throwing herself between the tree and the man with the ax before he could strike a fourth blow. Her bold and principled action is the first recorded instance of environmental protest in the Berkshires.

The Old Elm was already the tallest tree in the forest in 1752, when Captain Charles Goodrich, hacking the first cart path into the wilderness, instructed his men to “spare that tree.” So it was that the road, which later became East Street, was moved to accommodate the tree, instead of the other way around.

By 1790, the town needed a new meetinghouse, and the town fathers’ plans did not include the Old Elm, until Lucretia Williams intervened. If she was described as a meddlesome hysteric, as women who act on their passion for nature sometimes are, it was only in private, for her husband was the influential John Chandler Williams, a neighboring landowner sometimes described as “the Squire.” Mr. Williams set things to right by giving enough of his land south of the Old Elm so that the town would move the 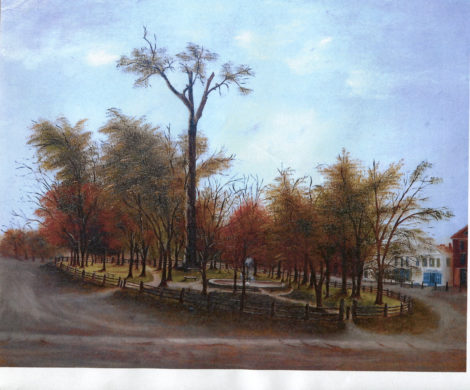 The Old Elm in Pittsfield that Lucretia Williams saved from the ax in 1790.

new meetinghouse to the north. Thus was established the oval common at the heart of the Berkshires that we now know as Park Square.

The Old Elm, cherished as “the Pride of Pittsfield,” achieved literary immortality when Herman Melville took the lightning scar on its trunk and painted it on the face of Captain Ahab in “Moby-Dick.” At last, having lost its crown of foliage and begun dropping large branches into the park, it was cut down before a throng of saddened townspeople on July 25, 1864.

Berkshire County, at the far western end of Massachusetts, accounts for nearly 12 percent of the land in the Commonwealth, but only 2 percent of its population. It has always been something of an economic backwater, especially in the latter part of the 20th century as its industries, paper, textiles and electrical products, have all declined. 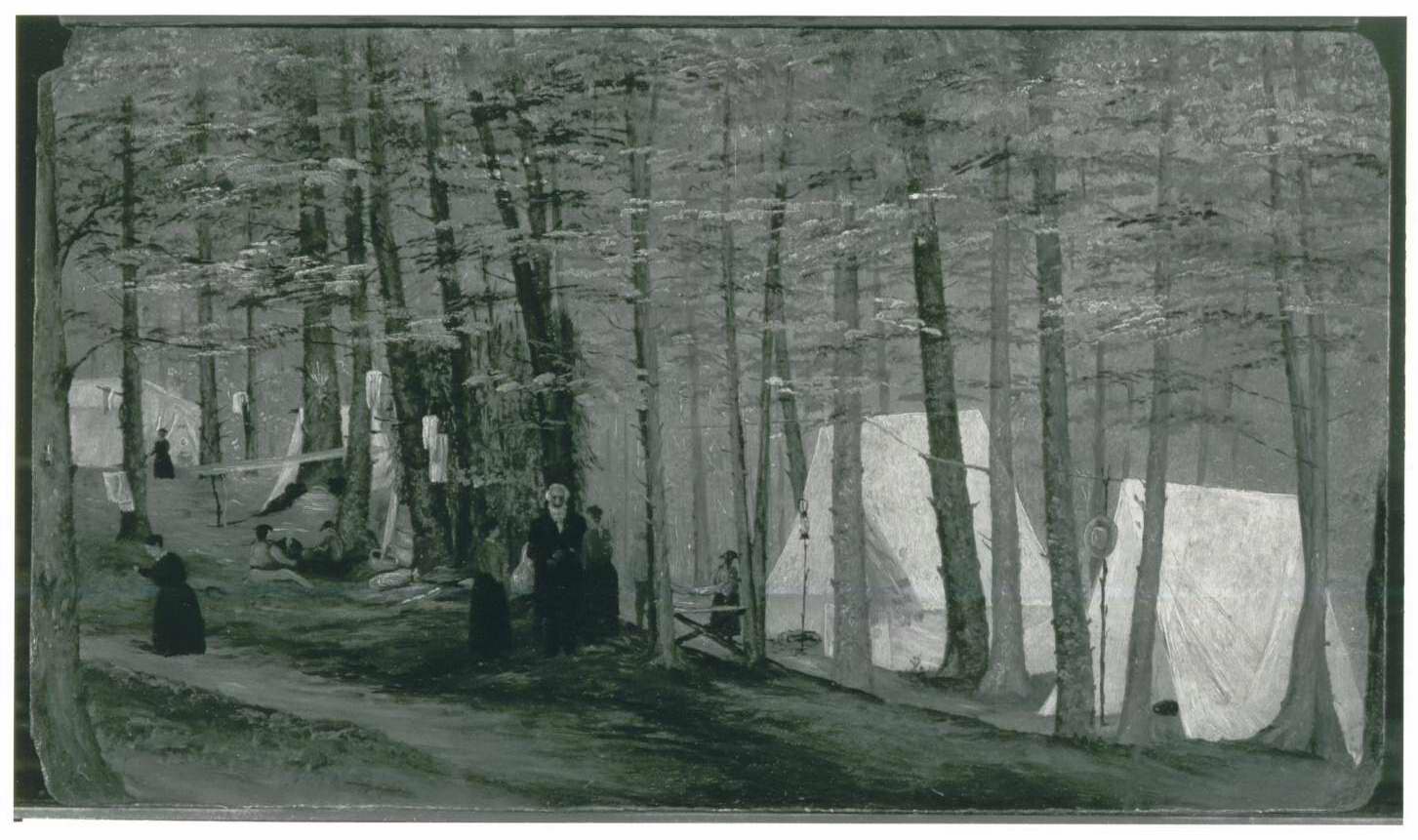 Camp Fern on the slopes of Mount Greylock, circa 1870. Photo courtesy of Williamstown House of Local History

Agriculture is but a shadow of its former self – most of the hills we now see covered with trees were cleared fields 150 years ago. These demographic and economic facts have made the Berkshires an inviting target for land development schemes hatched by outside businessmen and politicians, particularly in Boston where, as the popular Berkshire phrase has it, “people think the state ends at Route 128.”

Fortunately for our fair hills, the Berkshires are rich in people who care passionately about the landscape. Some of them are wealthy, sophisticated and politically connected. Others, less so, have proven just as effective in rallying their neighbors to oppose projects that would despoil the natural beauty of the mountains to benefit a select few. Here is one example of citizen action over the past 35 years, which serves to demonstrate that the biggest, baddest ideas can be defeated by the courage, resourcefulness, hard work and money of people who love the Berkshires as they are.

The Ur-text of modern environmental action in the Berkshires is the story of the Greylock Tramway. Readers of the local newspapers were surprised one day in the spring of 1964 to learn that the Mount Greylock Tramway Authority, created by an act of the Legislature a decade earlier, planned to begin work by summer to transform the highest mountain in Massachusetts into a downhill ski area. Plans included a 100-foot tower on the 3,491-foot summit of Mount Greylock for the “world’s largest” aerial tramway, 11 miles of ski trails, four chairlifts and a commercial complex at the base. All this, $5.5 million in 1964 dollars, was to be financed by bonds backed by the full faith and credit of the Commonwealth of Massachusetts, to be repaid only when the thing showed a profit. The chairman of the Tramway Authority was one Bertram A. Druker, a Boston real estate developer who specialized in what was then called “urban renewal.”

The business community of Adams, then as now an economically depressed mill town in the shadow of the mountain, was transported with delight at the prospect of becoming a ski town instead. Various other business and political leaders, including Gov. Endicott Peabody, an avid skier, lent their support as well, touting the economic benefit to the entire Northern Berkshire region.

Ranged against these powerful interests were some Williams College professors, a local superintendent of schools, a botanist named Pamela Weatherbee, other assorted ornithologists and hiking enthusiasts and William H. Tague, a former reporter and photographer for The Berkshire Eagle. 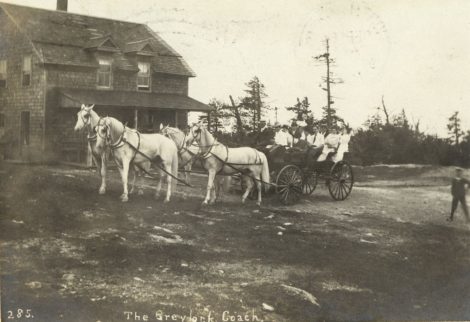 The ‘Greylock Coach’ arriving at the summit of Mount Greylock, circa 1908. Photo courtesy of Dept. of Conservation and Recreation.

As Tague relates in his richly flavored account “The Rise and Evaporation of the Mount Greylock Tramway Authority,” there used to be such a thing as the Greylock Commission, which was supposed to “care for, protect and maintain” the 8,800-acre wilderness reservation established in 1898. This organization had been sadly co-opted, however, signing away half the reservation on a 40-year lease to the Tramway Authority in 1960. This is how business was done in the old days.

Tague and 35 fellow citizens met in a classroom to resurrect the old Mount Greylock Protective Association, which had formed to oppose logging on the reservation some years before. Tague was elected chairman when “Nobody else would take the job.”

The defenders of the “bleak beauty and the stern hostility of the summit to man,” soon learned they were up against an Authority that could issue bonds at will, exercise the power of eminent domain to seize private lands as it deemed necessary, and was answerable neither to the governor nor the Legislature. “Short of remedial new legislation or hostile rulings by the courts,” Tague wrote, “there was no way even to slow down the commercialized monster that was closing in on the mountain.”

Seizing control of the situation in that blunt, impatient way he had, Tague persuaded the group that “what was needed was an immediate frontal attack on the exploiters by collecting cash and slapping a court action on them.” The quiet angel at his shoulder was Donald Miller, the publisher of The Berkshire Eagle, who wrote the check for the lawyer’s fee. The suit was filed in July, and the Authority declared that while it had no merit, work would not start until it was resolved.

This quick legal action, probably more than anything else, was what saved Greylock, for if the bulldozers had started that summer, there would have been no stopping them. It gave the organization breathing room to raise money for lawyers and rally public opinion against what Tague, a master of invective, called “a monstrous outrage…throwing public lands down the drain.” His lush black and white photographs of the mountain’s many moods, often with his little daughter frolicking in the foreground, published in The Berkshire Eagle’s “Eagle Eye” column, did much to establish Greylock as a sacred place in the public imagination.

But for Tague, action counted more than words or pictures. The Protective Association played hardball, twisting arms in the Legislature and hiring a top lawyer – John L. Saltonstall of the Boston firm of Hill and Barlow – to press the case all the way to the Supreme Judicial Court. “Conservation is good and Greylock is beautiful and all that,” Tague wrote, “…but in fact, the final results were gained in the courts on strictly legal grounds and at the State House by means of raw political power.”

The Mount Greylock Protective Association never let up. The struggle took two and a half years and in the end, 1,300 people would join, contributing $18,250, big money in 1964. Most of the money went to legal fees. “There were temporary triumphs followed by frustrating setbacks, moments of silliness and periods of maddening delay and unrelenting work.” But in the end, the Protective Association won its lawsuit against the Tramway Authority and the Greylock Commission, and then it slew the dragon once and for all by persuading the Legislature to abolish the Tramway Authority.

“Votes,” wrote Tague of this unprecedented legislative triumph, “are gotten by threats, maneuvering and deals, or by arousing an outraged public and forcing the politicians to do right.” After the court victory in 1966, the force of public opinion was such that the abolition bill could not be stopped, despite the opposition of most of the Berkshire delegation to the General Court, and the Tramway Authority passed into history on Labor Day of that year.

Even so, state Rep. Edward S. Zelazo of Adams and Senator Andrea F. Nuciforo of Pittsfield succeeded in amending the bill transferring stewardship of the reservation from the Greylock Commission to the state Department of Natural Resources to set aside a portion of Saddle Ball Mountain, a lesser height on the Greylock massif, for development. This has come to be known as the Greylock Glen, an 1,100-acre parcel at the foot of the mountain for which many ambitious projects – ski areas, golf courses, condominium developments, environmental education facilities — have been proposed but never built. The defenders seem to have the upper hand, but the desire of business to make money out of the mountain never dies.