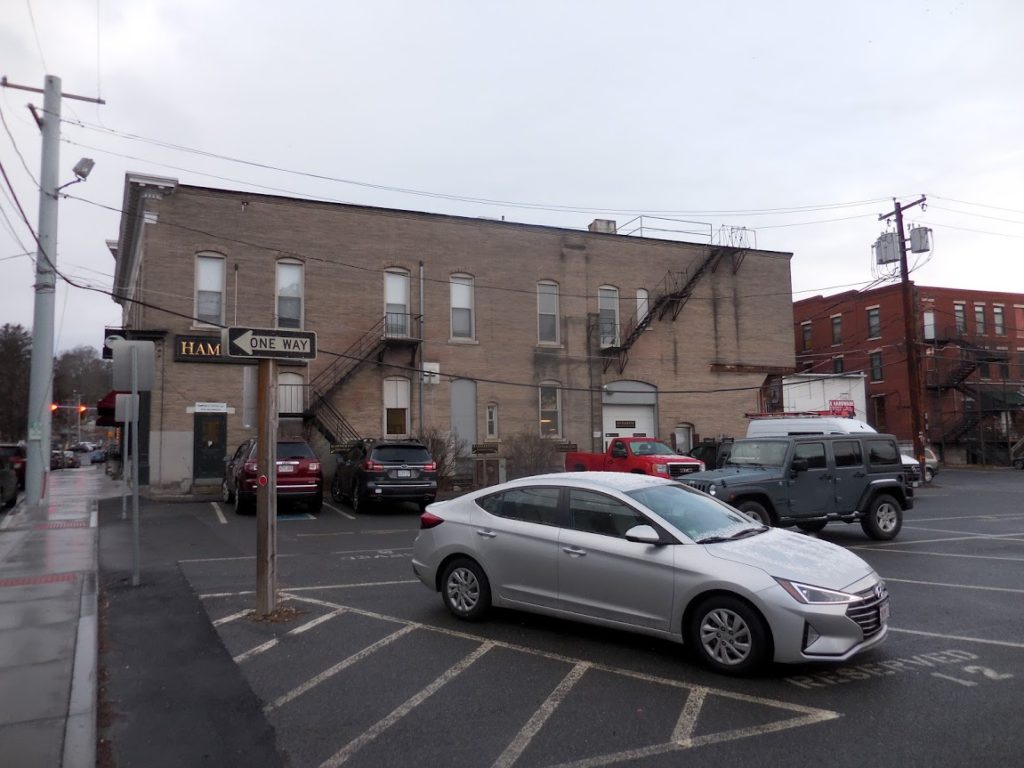 The parking lot behind the former Foster’s hardware store (now Hammertown) recently purchased by the owners of Berkshire Block would be closed to the public if the company is denied its special permit. Photo: Terry Cowgill

Editor’s note: The replay of the April 27 selectboard meeting is now available on the CTSB website. Click here to view it.

Great Barrington — A developer’s plan to create a private downtown parking lot has been put on hold again, as the selectboard continued deliberations on the proposal by the new owners of the Berkshire Block.

The new owner of the building at the intersection of Main and Bridge streets, Philips International Holding Corp., would like to buy the lot on School Street currently occupied by the Individual Laundry laundromat, demolish the structure, and build a gated parking lot of some 38 new spots for the exclusive use of upstairs office tenants and customers of the street-level retail establishments in the Berkshire Block.

At its Dec. 12, 2019, meeting, the planning board gave the proposal a negative declaration. Click here to see the letter describing the board’s reasoning. The proposal was greeted with skepticism at its first public hearing before the selectboard in January.

Monday night’s selectboard meeting, held remotely via Zoom to review the two sets of findings by town planner Chris Rembold, turned tense when selectboard member Leigh Davis suggested the new owner, a New York City-based corporation, was issuing a “threat” to the town government in insisting that the company would close to the public the existing lot it owns behind the former Foster’s hardware building if the town did not grant the special permit for the proposed new private lot on School Street.

“I am appealing to the owners to do the right thing,” Davis said, “and not take this big-city approach.”

Davis protested several times during the 90 minutes of deliberation, wondering aloud why she had received a phone call from town manager Mark Pruhenski telling her that the company, if denied the special permit, would close the Foster’s lot, which had previously been open to the public on nights and weekends.

“I just feel it’s a legal and ethical question that we need to consider before deliberation,” Davis said. “Was it designed to sway our opinion?”

Other board members said it was clear to them after that first public hearing that the Foster’s lot would be closed to the public if the company was denied the right to build the new lot for its tenants. For his part, Pruhenski said he called only Davis because he meets with the other board members regularly.

Davis continued to question whether the new parking lot would be consistent with the intent of its B3 zoning designation, which encourages mixed-use development, among other things. This was the same argument made by the planning board in its negative declaration, which said the proposal “does not serve the social or economic needs of the town.”

Philips would like to buy the lot on School Street currently occupied by the Individual Laundry laundromat, demolish the structure, and build a gated parking lot of some 38 new spots for upstairs office tenants and customers of the street-level retail establishments in the Berkshire Block. The laundromat building, owned by the Torrico family and regarded as something of an eyesore, also has two upstairs apartments but its tenants have already been relocated.

Philips, which bought the building at 311-322 Main St. in 2016 from Avcorm Realty Trust for $2.45 million, has spent $2.5 million renovating the building into approximately 35 upstairs offices. Half a dozen or so retail spaces already existed, including not only Subway but the popular Patisserie Lenox coffee and pastry shop.

The addition of so many offices, many of which were formerly apartments, has created a parking problem for the new owners of the building. So the company recently bought the lot containing 41 spots adjacent to the former Foster’s hardware store. If the laundromat proposal is approved, the total number of new spaces for Berkshire Block tenants and retail customers and tenants would be 75.

Selectman Bill Cooke said the town has in the past encouraged downtown employers to provide parking for employees and that’s just what the Berkshire Block is doing.

But Davis countered that parking isn’t as scarce as it might seem. She noted that a private lot had been built to accommodate the new 47 Railroad Street development and the lot is mostly empty. In addition, Wheeler & Taylor, on the other side of Bridge Street, has parking spots available for lease.

Davis also quoted prominent downtown businessman Richard Stanley, who was quoted by the Edge in 2017 as saying of the parking issue: “I think the problem is somewhat exaggerated. Not one of my retail tenants in 30 years has said, ‘I can’t survive without more parking.’ If that was an issue, I’d be leading the charge.”

But selectboard member Kate Burke, who also manages the Saturday morning Great Barrington Farmers’ Market, said one of the most common complaints she hears from customers is the lack of accessible nearby parking.

“It’s hard for me to play hardball when all of these downtown businesses have been suffering,” Burke said.

“I hesitate to think that we’re going to have another private gated parking lot in the middle of downtown that suits the owners and suits the tenants and drives up the rental rates in town,” Davis countered.

Selectboard member Ed Abrahams countered that the current option of a private parking lot on School Street is the one he least prefers but the alternative in denying the special permit is losing 41 parking spots on the Foster lot that could be used by shoppers and tourists on nights and weekends.

Of the proposed private lot on School Street, Abrahams said: “I know that this lot will sit empty on weekends. Shame on the developers for putting a gate around the lot so that it’s empty on weekends, but the option is losing the Foster’s lot. Whether it’s a threat, whether it’s unneighborly, whether it’s people who don’t know what it’s like to do business in a small town — all of that is true. Nevertheless, we can’t get what we want. We can’t get perfect, so we have to take the best thing we can get.”

Davis suggested Philips was merely bluffing or “playing chicken.” Davis again cited the planning board’s giving a thumbs down to the proposal at the end of last year.

“I think the planning board was right absolutely because they are tasked with absolutely interpreting zoning bylaws and this, I think, definitely does not meet those bylaws for B3,” Cooke said. “But the selectboard, I think, as the special permit-granting authority, has to take other things into consideration. I believe that keeping the Foster’s lot open is of great value to the town.”

“I don’t think anyone’s wrong in this case,” selectboard Chair Steve Bannon said of his colleagues. “My problem is the owners of the Berkshire Block have not budged one inch since we started, and we’ve negotiated against ourselves and I still think there would be no harm in them opening up the School Street lot on nights and weekends.”

Just before this article was published, planning board member Jonathan Hankin issued a statement to the selectboard calling on Burke to recuse herself from voting on the matter because of her position as general manager of the farmers’ market, which is held just around the corner from the proposed School Street lot and the existing Foster’s lot:

During last night’s discussion it was admitted by virtually all Select Board members that there is a, now public, threat from the applicant that if the special permit is not granted it will result in the closure of 41 private parking spaces on the Foster’s lot to the public.

This public access has historically been allowed on nights and weekends and, as was specifically discussed, is critical to the farmers market at 18 Church St. Since no member made the case that the new lot will provide needed parking, it is clear that the threat of loss of use of the Foster’s lot is a major determinant in the decision to grant or not grant a special permit for a commercial parking lot under the same ownership at 11 School Street.

In light of this, I do not believe it would be ethical for Kate, as the manager of the Great Barrington farmers market — that entity that would be most adversely affected by the threatened closure — to vote on this application. I sincerely hope that she will agree and that she will recuse herself due to the appearance of a conflict of interest.

Davis also questioned the economics of the proposal. She said she had spoken with town assessor Shaun McHugh, who told her the existing School Street building is assessed at $586,000, while a parking lot would be assessed at $200,000. A fully developed lot would be worth in the neighborhood of $1.5 million, so Davis says the town would also be losing revenue in the deal. However, Philips has spent a reported $2.5 million renovating the Berkshire Block, so the company will pay considerably more in taxes to the town on that building than its predecessor did.

In the end, the deliberations on Rembold’s findings were continued to Monday, May 18, at 6:30 p.m. At Abrahams’ urging, Bannon asked Rembold and Pruhenski to ask town counsel about the advisability of inserting a deed restriction into the special permit that would guarantee that the Foster’s lot would remain open to the public on nights and weekends.