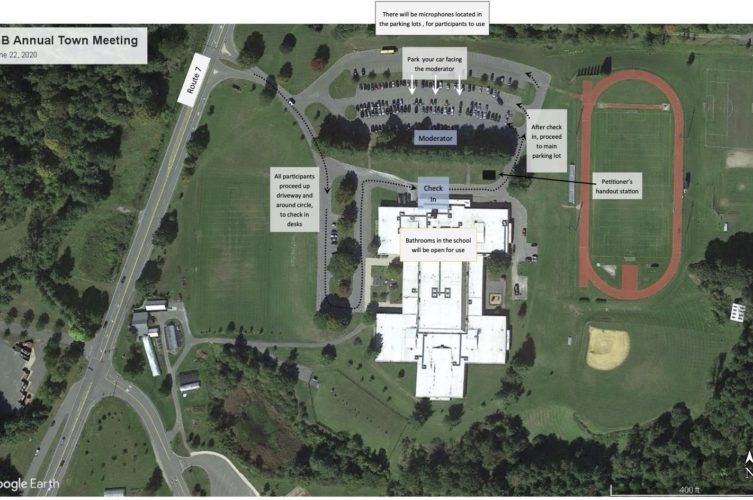 A map prepared by the town government identifies the locations for check-in, parking and restrooms for the Great Barrington annual town meeting to be held in the parking lot at Monument Mountain Regional High School.

Great Barrington — It will be one for the history books — an event that will no doubt be remembered for generations.

For the first time in its storied history, the town of Great Barrington is holding its annual town meeting outdoors. Out of an abundance of caution prompted by the COVID-19 pandemic and physical distancing guidelines issued by the office of Gov. Charlie Baker, the town selectboard has decided to hold the meeting in the parking lot of Monument Mountain Regional High School.

Like all but three others in Berkshire County (Pittsfield, North Adams and Lee being the exceptions), Great Barrington is governed by the open town meeting form of government. That means voters are the legislative body of the town. They must convene in an open session to vote on items placed on the agenda (known in town government-speak as “the warrant”).

The meeting is typically held in the first or second week in May, but back in April, as the severity of the pandemic became more evident, the board decided to postpone it until June 25 in the high school auditorium. Last month and in the interest of safety, the board opted to hold the meeting outside, with the number of items a fraction of those on the original warrant. Click here to see the 30 items on the revised warrant.

Click here to see a webinar by the Massachusetts Municipal Association in which town officials in Lexington, Blackstone and Sandwich discuss their experiences with town meetings and elections this year. Lexington held its meeting remotely. Like Lee, Lexington has the representative town meeting form of government with elected representatives voting instead of all registered voters attending the meeting. Blackstone held its annual town meeting outside a few weeks ago, also in a high school parking lot. The town of Auburn held its town meeting on a football field.

See video below from WGBH-TV on how the towns of Auburn, Blackstone and Lexington have adjusted to the public health crisis by holding town meetings in unorthodox locations:

The only items on the Great Barrington warrant were to be budgetary, with a host of zoning amendments and other items, including citizen petition initiatives, to be postponed until a special town meeting could be held later this summer or perhaps in the fall, when physical distancing guidelines might be relaxed enough to hold a meeting in a traditional indoor venue.

Some have suggested behind the scenes that the delay of the citizen petition items is an infringement of the rights of the petitioners and the voters, or that the town failed to notice the meeting properly.

“Nothing about 2020 is perfect,” town manager Mark Pruhenski said in an Edge interview. “Unless someone else has a brilliant idea for how we pass a budget, we’re going to proceed with what we have.”

Pruhenski said that since the environment for the meeting would be less than ideal, the goal of the selectboard was to keep the meeting as brief as possible. The most important item by far was the budget.

If the town meeting is not able to pass a budget by the end of the fiscal year on June 30, the town of Great Barrington, like hundreds of other small municipalities in the state with a town-meeting form of government, has a problem. The selectboard would then have to pass so-called one-twelfth budgets, monthly spending packages that would be the same as the previous year, until a town meeting could be held and a budget could be passed.

“We wouldn’t be able to deliver the services that our residents are used to receiving, and we wouldn’t be able to proceed with any capital projects,” Pruhenski explained. “It would really bring town government to a grinding halt. I just don’t think people quite understand that.”

Eventually though, the warrant did have to expand from budgetary items to include citizen petition items. Pruhenski said he consulted with town counsel David Doneski, who advised that the selectboard add the petition items “because we do have a statutory obligation and the legislature did not provide any relief for petition articles.”

There are eight citizen petition items ranging from several zoning proposals to a ban on toxic waste disposal to a proposal to maintain Lake Mansfield Road as a two-way road, which would reverse the wishes of both the selectboard and the Lake Mansfield Improvement Task Force. Also on the warrant will be eight items for spending by the Great Barrington Community Preservation Committee totaling more than $828,000.

The selectboard has resolved to ask the petitioners to set aside consideration of their petitions until a special town meeting can be scheduled. Such a move would require a majority vote of citizens at Monday’s town meeting.

Pruhenski said he had reached out to representatives from the petitioners to determine in advance whether they would be inclined to agree to delay a discussion and a vote on their petitions.

As of Friday, he had heard back only from Michelle Loubert, who represents a group proposing a zoning proposal on marijuana establishments (Article 25), and MaryBeth Merritt, who is proposing a ban on hazardous waste storage and disposal (Article 28). Neither had an objection to delaying a discussion and a vote on their proposals.

But the vast majority of the meeting will be budgetary. The town’s proposed operating budget, which does not include education spending, is more than $12.2 million, an increase of 4.9% over this year. The proposed capital budget is upward of $4.3 million, a decrease of almost 50% from this year. Click here to see a PowerPoint presentation on the budget prepared by Pruhenski.

As usual, the amount the town owes to fund the regional school district will be voted on separately. The town’s share of the Berkshire Hills Regional School District’s proposed fiscal year 2021 budget is a little more than $17.5 million, an increase of nearly 5% over last year. The first of those payments is due in August. It cannot be made if the town is only allowed to spend one-twelfth of last year’s budget.

As was noted above, there have also been questions about whether the town has satisfied the notification requirements as set forth in the state’s open meeting laws. In a town of Great Barrington’s size, the meeting must be posted seven days in advance at five locations in town. According to the Great Barrington charter, two of those locations must be in the Housatonic section of town.

Pruhenski said notices and the warrant were posted well in advance at both the Mason and Ramsdell libraries, the Housatonic and Great Barrington post offices and at Town Hall. The documents were posted in transparent plastic sleeves to protect them from the elements. There has been some question as to whether the Mason and the Ramsdell are valid places for postings since both remain temporarily closed because of the pandemic. Again, Pruhenski sought legal advice and was told those locations satisfied the requirement of the law.

In addition, a link to the warrant sits on the homepage of the town website, along with the budget presentation. Several press releases have also been sent out, including one that appeared in The Edge on Wednesday. Both Pruhenski and assistant town manager Chris Rembold appeared on WSBS radio this week to discuss the town meeting. Click here to listen to the podcast.

At any rate, the town meeting is scheduled to begin at 6 p.m. on Monday in the parking lot. Staff has been busy this week arranging for an outdoor sound system and an FM radio broadcast of the meeting, which voters can follow in their cars. Parking lot microphones and other details are being arranged to ensure full participation.

Persons who do not have radios in their cars can bring lawn chairs or blankets and may sit in a grassy area between the parking lot and the school building, Pruhenski told The Edge. Alcohol use and smoking are prohibited on school property.

“Everyone needs to stay in or near their vehicle, kids must be supervised — there’s no childcare this year — and the usual social distancing rules apply,” said Pruhenski in his statement. “We believe this will be a successful way to conduct our town’s annual business.”

Voters planning to attend must enter the high school driveway on Route 7 and proceed to the main high school entrance area. There, they will be checked in and given their annual town meeting warrants, supporting documentation and colored voting cards.

Non-residents of Great Barrington may not attend the meeting unless they seek permission in writing in advance from town moderator Michael Wise, who can be reached at michaelwise@earthlink.net.

Pruhenski said participants will vote as they usually do, with colored cards indicating approval or disapproval.

“We’re hoping that people vote with their cards and not their horns,” Pruhenski joked. “It could be a loud evening if they decide to honk.”