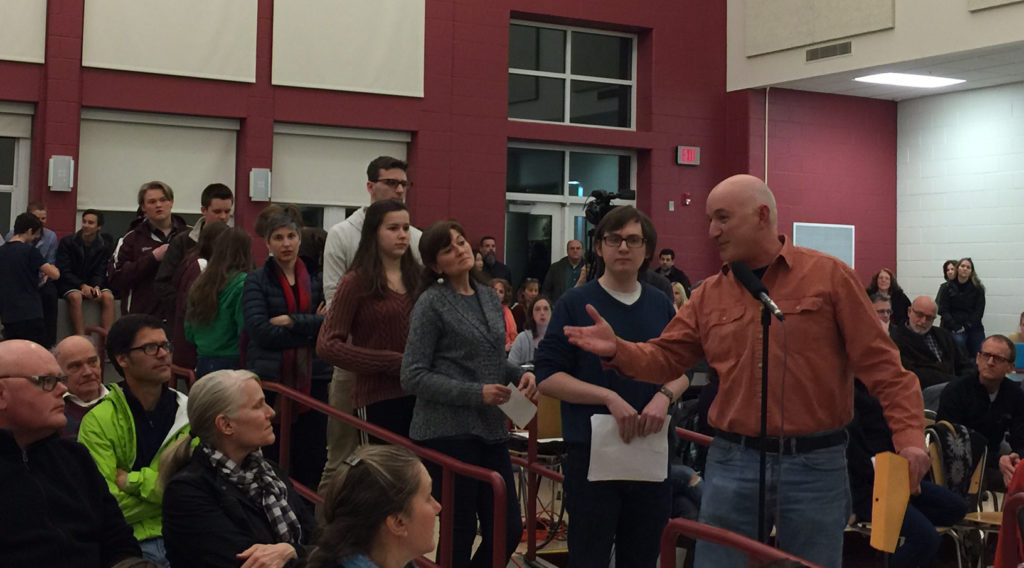 Heather Bellow
At the head of line of protesting parents, students and teachers is former Berkshire Hills School Committee member David Adler, creator of the Save Berkshire Hills Music Department Facebook page. 'It's like Palo Alto schools defunding its computer science program.' he told the School Committee. Next in line is Jacob Robbins, president of the Monument Mountain Regional High School Student Council.

The Berkshire Hills Regional School District School Committee will likely vote on whether to retain the cuts Wednesday, March 3, in another meeting also at the middle school. 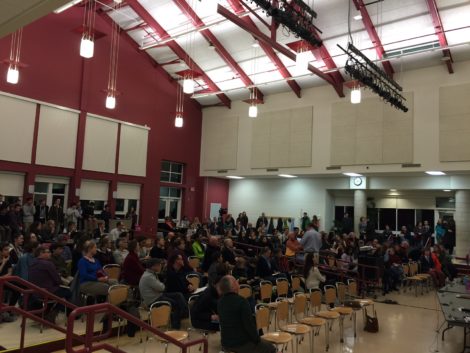 Parents, students and teachers crowded into the Monument Valley Regional Middle School auditorium to protest the proposed cuts to music and art.

Like many rural districts, Berkshire Hills is struggling to keep its three schools afloat and thriving in a climate of rising expenses, less state money, revenue losses, a dwindling, increasingly aging population that can’t handle the yearly tax increase on fixed incomes.

This year’s $25 million proposed operating and capital budget, close to the bone as it is, and with a $400,000 to $600,000 in cuts, still clocks in at a 7 percent increase to the three towns from last year. But it’s the $939,000 blow to Great Barrington taxpayers that has officials nervous. The town shoulders 52 percent of school costs, with Stockbridge and West Stockbridge splitting the rest. Officials are not without reason to fret; the Regional Agreement Committee is now studying the fairness of the cost division, one of several issues that over the last several years snuffed two plans to renovate a deteriorating 50-year-old Monument High.

Pushed to the wall by so many forces, the district is now on a mission to “reinvent” itself by partnering up with other districts, sharing services and making adjustments within the schools.

But none of it can happen fast enough to keep the Great Barrington property tax anvil from gaining weight. 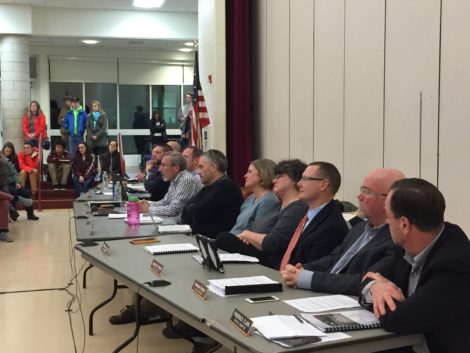 The Berkshire Hills Regional School Committee listening to testimony from the public during the budget presentation. Photo: Heather Bellow

The school committee said it made the cuts in the only place it could without harming education. And while the district has found some ways to save money for this year, and even pulled some money from a rainy day fund, it still couldn’t lessen the blow to taxpayers without hitting music and art.

The plan is to not replace long-term music teacher Jeffrey Stevens’ position at the high and middle schools, reduce a high school art teacher to part time, and pull a second grade teaching position at Muddy Brook Elementary.

“This rattles me as I’m sure as it does everybody here,” said Superintendent Peter Dillon, noting all the state funding cuts since he began here 9 years ago. “We can’t keep doing what we’re doing with less money and resources…we could now die a death of a thousand cuts.” He said the only way forward is with a “grand rethinking,” “thoughtful planning” and community input.

But now is now, and the community said that in these culturally vibrant Berkshires, reducing a music and art program that sends students to acclaimed music conservatories and art schools, and has graduated noted musicians and artists, is a mistake. 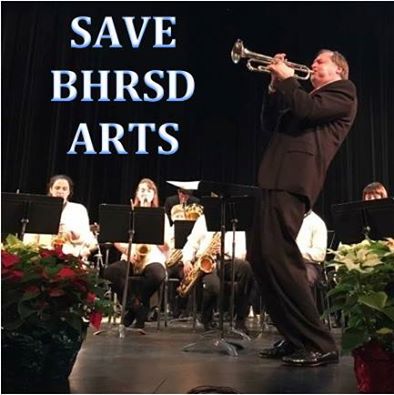 “It’s like Palo Alto schools defunding its computer science program,” said Monument parent and former school committee member David Adler, reading from a post to the Save Berkshire Hills Music Department Facebook page, which he started. The post was that of a graduate who now plays with the Boston Symphony Orchestra, Adler said.

“My worst fear was realized,” said Monument senior Jacob Robbins, president of the Student Council, who also spoke out against proposed art program cuts last year. These cuts “threaten the very culture and fabric that Monument prides itself on.” He further said art and music were “salvation…in a world that looks like it might fall apart.”

Several speakers, including Stephanie Adler, said this is how programs get diminished “bit by bit, piece by piece.”

Monument and Berklee College of Music graduate Ariel Shrum is now a professional trumpet player and composer. “It is tragic to think that budding musicians in this district would be denied” the opportunity he had, he said. “Not every student can afford private school.”

Students continued to read posts from the Facebook page that said the Monument music program was, indeed, salvation, and helped balance the stressful world of academics and standardized testing. 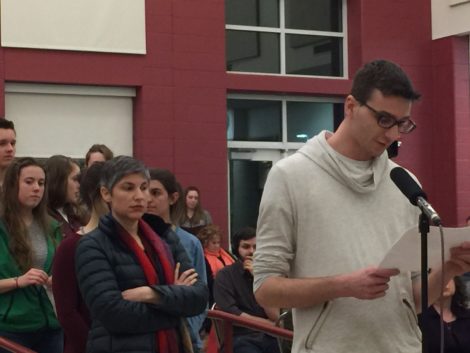 Berkshire Hills parent Rebecca Gold urged voters to come to Annual Town Meetings and vote for the school budget, and said those who can commit to supporting the schools at Town Meeting in May should send an email to helpgbschools@gmail.com. So far 60 residents have signed up.

Neel Webber, a 20-year art faculty member told the committee and audience that he had not been asked about the impact of the cuts, despite the committee’s claim they had worked with teachers to minimize the damage. He said “losing one faculty member,” one “known throughout the history of the school as connecting to kids,” would also result in the loss of five sections of art classes that would diminish students’ choices. Webber said that design and art are useful and needed everywhere. “What company doesn’t have design as a primary thing that they do?” he said.

“We all know that if you cut the art program it won’t come back,” said Monument alumni Eoin Higgins.

West Stockbridge resident and parent Jon Piasecki did not hide his outrage. “To the young people here,” he said, looking at a wall of students, “the people who want these cuts are impoverishing you…we should light a fire under them.”

Another parent, an engineer, said art was one way to help students struggling with academics. “Art and music are just as essential as math and science,” she said. 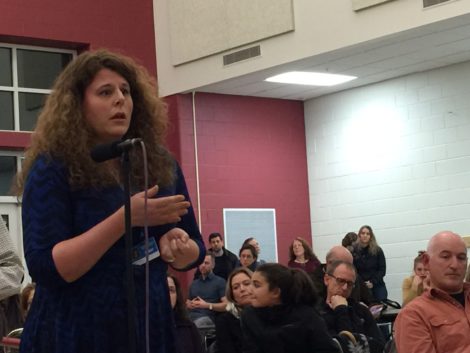 Second grade teacher Sarah Difazio said in her 11 years as a teacher she had seen “significant changes” in children. She said they need more connection with teachers, not less, and the removal of a second grade teacher that will increase class size, has her worried.

The mighty dollar had, for a while, been forgotten — but not for long. Finance Committee Chair Michael Wise, who is also on the Regional Agreement Committee formed to rework the money pie between the three towns, “speaking personally,” said it would be “tough” to ask Great Barrington for that $939,000, “the largest ever asked for.” He went on to say that he, too, was a musician, having also attended a high school with a superb music program. “I went to the New England Conservatory from that training,” he said. “We had a faculty of two, with 1,300 kids.” He said this program cut still leaves four music teachers. “Is four destroying music? Probably not.”

Housatonic resident and Monument graduate Michelle Loubert reminded everyone that there is also the ever-ascending town budget to consider as well, to be unveiled on Monday (February 29). “This is only the beginning as far as the Great Barrington taxpayers are concerned.” 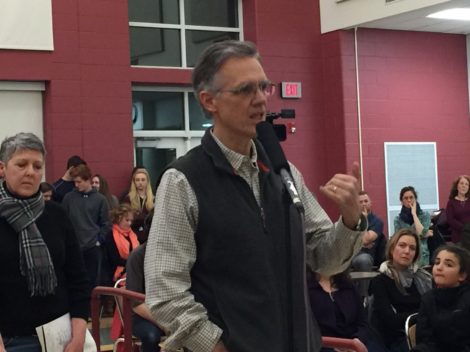 Former finance committee Chair Sharon Gregory said that as an artist and musician herself, she agreed with everyone about their importance. The solution might be, she said to work with other districts “in earnest” and “combine programs” so such cuts like these don’t ever have to be made.

Great Barrington Selectboard member and Monument parent Ed Abrahams said the towns will pass whatever budget it gives them, that the committee should present to voters whatever it needs to do the job properly. “Although it’s expensive and although it hurts, they support the schools.”

Members of the district’s finance subcommittee explained their reasoning for the cuts, and why they thought the cuts wouldn’t harm students. Subcommittee member Richard Dohoney, also a parent, said he believes the schools can keep programming at “the same level of quality.” Except for the second grade cut, he said. He thought that might be a bad idea.

“The cuts are not a change in policy, or about how important music and art are,” he added. “One thing we can’t do…is err too far on the side of over staffing.”

Member Dan Weston said the district needs “a sustainable budget in the long run,” and said he worried about the budget not passing in one town.

School committee member Andy Potter said he had “faith” in town meetings, and said he was not in favor of the cuts. 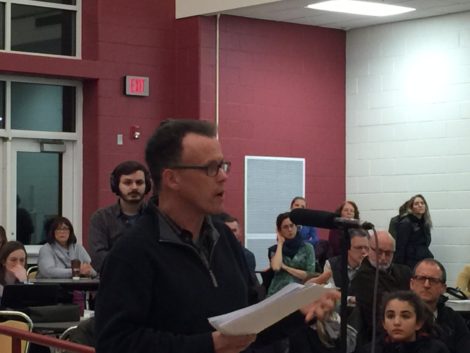 Finance subcommittee member Bill Fields, a retired 40-year social studies teacher at Monument who is known for his derision of state oversight and its unfunded mandates, spoke at length about the squeeze between educational ideals and money.

“I think you have to look at the reality facing towns with inordinate tax problems,” he said. “We can go to the state and point fingers as I do — the state doesn’t do its job and we should throw the bums out…but I’m a realist…we have to look at what we can do with limited resources.”

Monument graduate and committee member Richard Bradway said he feared the music cut would “subsequently erode” the program. “I can’t in my heart support that.”

Dillon and Harrison had already done their math on what it would cost to keep the music position: $65,000. They hadn’t yet calculated what it would take to keep the second grade teacher, however, but said they would calculate the breakdown of exactly how much extra the towns would have to pay without the cuts.

And since the hearing, the Save Berkshire Hills Music Program page has gone all ablaze, with even a post from Jeffrey Stevens himself. “I never expected that announcing my retirement would create such a situation and I am having trouble finding the right way to understand and deal with it.” He said he hoped for at least some kind of compromise, since in his opinion, four teachers could not handle all the music groups from grades 4-12.

“It is up to the community to decide what it wants to provide for its children,” he wrote. “For the past 49 years the BHRSD community has expected and supported an active and outstanding band program and they have provided the resources necessary to achieve that. I don’t think the music department can continue to provide that along with everything else they are doing with only four positions.”

— Norman Mailer
Read next: NATURE’S TURN: For the kingdom of plants, great and small