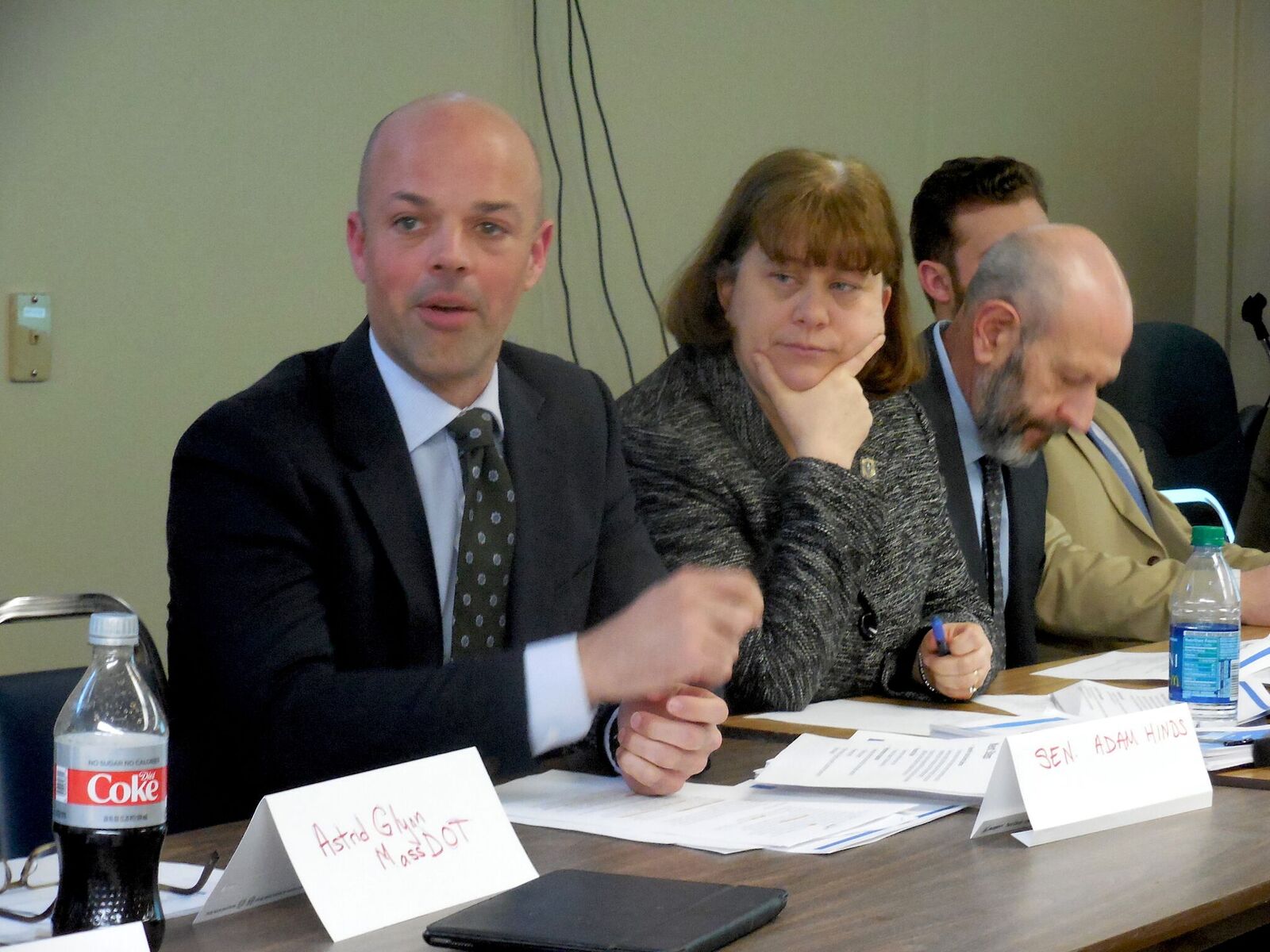 Lenox — The goal of returning passenger rail service to Berkshire County took another step forward yesterday with the release of a feasibility study by the so-called Berkshire Flyer Working Group.

Click here to view the 130-page study produced by the working group chaired by Sen. Adam Hinds, D-Pittsfield, who said the goal is to have the link between Pittsfield and Penn Station operable by the summer of 2019 or perhaps 2020.

The group unveiled its findings at the Lenox district headquarters of the Massachusetts Department of Transportation, which had engaged a consulting team and worked closely with the group after receiving approval from lawmakers to establish a panel “to identify and evaluate the economic and cultural benefits and political, legal or logistical challenges in establishing the passenger rail link.”

“This effort was started as an effort to tackle some of the trends we’re seeing in the region – in particular, population decline and its impact on our municipal budgets and our school budgets,” Hinds said at the meeting. “So, in many ways, this is an effort to try to spur the economy.”

See video below of the unveiling of the feasibility study by the Berkshire Flyer working group:

While the group told lawmakers in an April 1 letter the Berkshire Flyer concept “appears feasible and can provide benefits to the tourist economy of Berkshire County,” it will require funds to get it up and running.

“The gross cost to purchase the train service from Amtrak would be approximately $425,000, but the net cost could be reduced to some $240,000 if revenue projections proved accurate,” the letter to lawmakers said. “Those revenue and cost estimates are based on the service carrying 2,600 passengers over a 20-week season.”

In order to test the market, the service would start out as a pilot program. The plan is to run one round-trip train each weekend during summer and fall weekends between New York City and Pittsfield via the Rensselaer Station, just east across the Hudson River from Albany, New York.

An earlier plan, put forward by the Housatonic Railroad seven years ago and studied by the Berkshire Regional Planning Commission, had called for passenger rail service to use the former Housatonic Rail line, now owned by the state, that runs south from Pittsfield to Lenox, Stockbridge and Great Barrington, then through western Connecticut and terminating at Grand Central Terminal.

But that proposal quietly died because of a lack of interest on the part of the administration of Connecticut Gov. Dannel Malloy, whose state has been embroiled in a longstanding budget crisis. In addition, there was the perception that Connecticut would pay mightily for a project that would disproportionately benefit Massachusetts.

There are many other details to be worked out with the Berkshire Flyer if it’s going to succeed – among them the development of a marketing plan, the identification of a service sponsor that would formulate a business plan and the development of so-called “last-mile” services that would take Berkshire Flyer passengers to their final destinations once they arrive in Pittsfield.

Astrid Glynn, a rail and transit administrator with MassDOT, said the working group, as required, will submit the study to the state legislature and to MassDOT. Gov. Charlie Baker would also have to approve it. Early action would be required for the pilot program to begin next summer.

“MassDOT will be reviewing the information in order to learn more about the logistics, challenges and opportunities offered for proposed seasonal passenger train service between Pittsfield, Albany, and New York City,” Glynn said.

Hinds said that one of the most attractive aspects of the Berkshire Flyer option is that, unlike the aforementioned proposal by Housatonic Railroad which would have cost upwards of $200 million to complete, upfront investment will be minimal because the flyer will use existing rail infrastructure and service will be provided by an established rail passenger operator: Amtrak.

If realized, the system would be modeled on the CapeFLYER passenger rail service between Boston and Hyannis. The CapeFLYER service has been in operation for five summers and has attracted between 12,000 and 17,000 riders per season. Ridership varies from weekend to weekend, but MassDOT says it is strongest in the heavy vacation periods of July and early August.

Working-group member and rail enthusiast Eddie Sporn pointed out that the group’s meeting this week was the one-year anniversary of his first contact with Hinds on the flyer concept.

Sporn, a West Stockbridge-based real estate strategy and planning consultant and former New York City hedge fund executive, had been doing some reading on the passenger rail scene when he stumbled upon a blog that suggested routing passenger service to the Berkshires through the Hudson Valley.

Sporn then sent a more detailed plan to Hinds and Reps. William “Smitty” Pignatelli, D-Lenox, and Tricia Farley-Bouvier, D-Pittsfield. Within about a week, he heard back from Hinds’ office and had a meeting with him.

Later Monday evening, Sporn attended a meeting of the Great Barrington Selectboard to update the board on the project. See video below of Sporn’s appearance:

“This offers the opportunity and potential for a huge amount of tourism dollars into Berkshire County and also a whole new group of people … to visit the county,” Sporn said.

Much of the impetus for rail service to the Berkshires has been on luring those from the millennial generation because fewer young people are staying in the county after graduating from high school.

Sporn pointed to the estimated 1.7 million people in the New York City region who do not have cars. One of the goals of the working group is for the Amtrak trains on the Berkshire Flyer line to have the capacity to carry bicycles.

“They might have somebody up here that they know and the only way they can get here is by bus,” Sporn said. “And surveys have shown over and over again that bus travel is the least palatable form of travel for people who have the resources to go other ways. And so we’re hoping that train travel will lure them.”

In January, Baker announced the creation of a special commission on the future of transportation in the state. A few days later, MassDOT unveiled a draft rail plan for Massachusetts.

“This is one part of a comprehensive transportation approach,” Sporn said. “We’re focused on realistic goals and funding in terms of what can be done.”