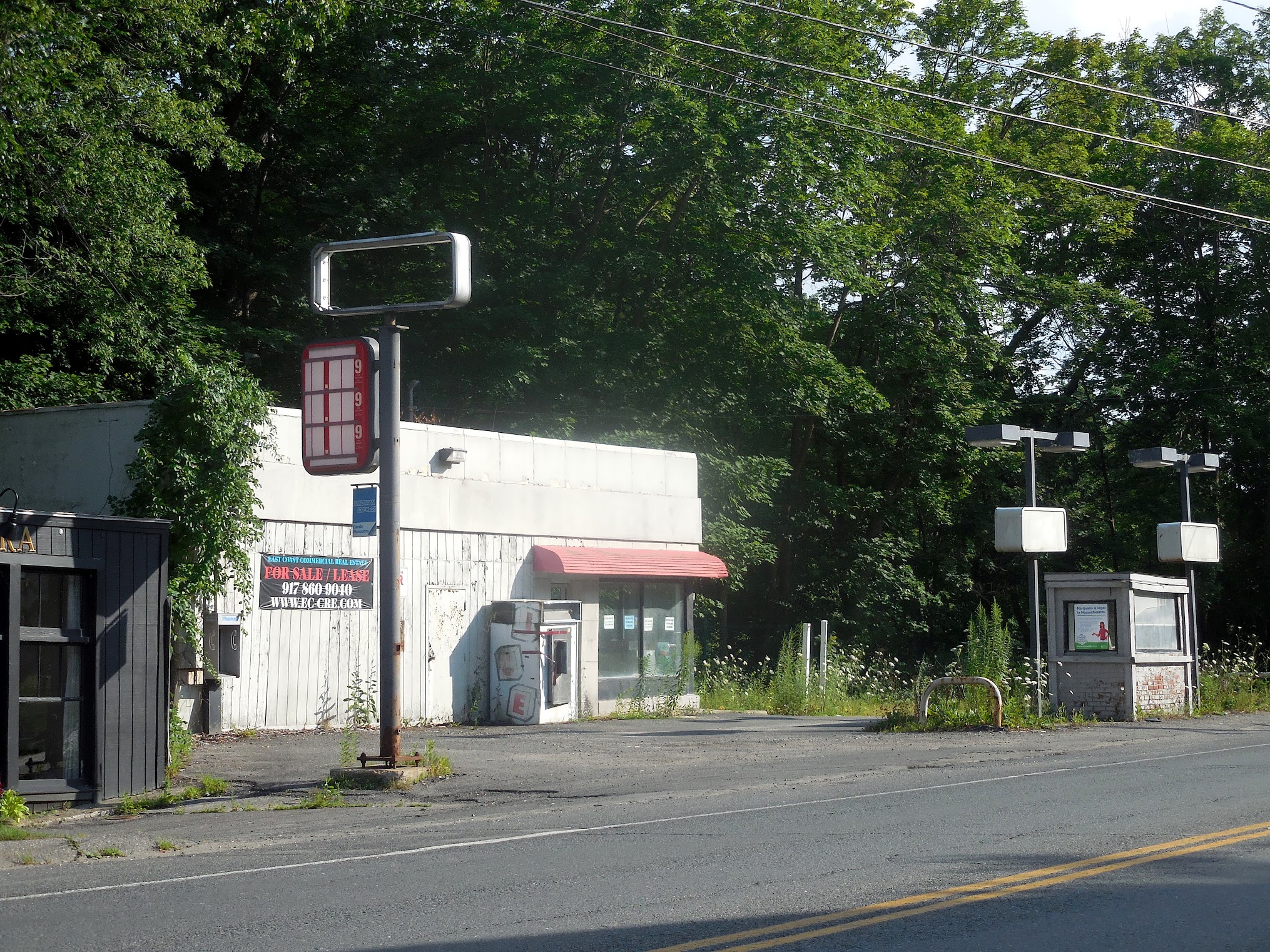 To the relief of residents and passersby, the former Getty station on Main Street in Great Barrington will soon be cleaned up and renovated. Photo: Terry Cowgill

GREAT BARRINGTON — One of the most blighted properties in town will soon get a sorely needed facelift at the hands of the owners of a local recreational cannabis retailer.

Farnsworth Fine Cannabis, a marijuana store at 126 Main Street, got a nod of approval from the selectboard last night to rent and use the former Getty gas station across the street.

Great Barrington attorney Kate McCormick, who represents the store and its co-owner Alexander Farnsworth, told the board her client needs to secure a licensing agreement with the town because a narrow slice of the property closest to the street is actually on town land.

The sliver of land includes the island where the gasoline pumps were, as well as the light stanchions and the tiny gas pump house where the attendant worked. The stanchions and the pump house remain. The attendant would sit in his quarters waiting to pump gas into vehicles because Getty was one of the few oil companies that did not offer self-service.

See video below of the discussion of the former Getty gasoline station at last night’s Great Barrington Selectboard meeting. The agenda item can be found at 29:30:

Farnsworth said he signed a lease to use the property rather than purchasing it because the current owner “wanted an exorbitant amount” for it. Farnsworth did not name the owner but records in the town assessor’s office list the owner as East Coast Commercial Real Estate LLC of Rockland, Massachusetts.

East Coast purchased the property on April 8, 2014, for $75,000. The total assessed value of the property is $155,300. East Coast’s manager is listed as Emir Raees of Biddeford, Maine, according to the office of Secretary of the Commonwealth William Galvin.

The last owner of the station was charged with tax fraud and failure to pay taxes in 2017. It appears the station closed for good the following year. The now-defunct Getty Petroleum filed for Chapter 11 bankruptcy protection in 2011.

McCormick said Farnsworth wants to repave the grounds for use as staff and customer parking and, perhaps later, to renovate the building farther back from the street as an office. That structure likely housed a cash register, assorted parts such as fan belts and perhaps vending machines, and a restroom for employees.

Town Planner Chris Rembold has said he did not know if the site was polluted, but said the underground tanks had been removed. The lot formerly hosted a mill, so it’s possible there is polluted soil from those days. Locals said the station always seemed to have a line, even when gasoline was abundant.

“It was the last service station in town that would pump gas for the customer,” local historian and Edge contributor Bernie Drew told The Edge. “Everyone else was self-serve. Thus it was popular with many drivers.”

McCormick said Farnsworth wants to preserve the pump island and pump house as a buffer between the road and the gas station building. Potted plants will be placed to soften the space. Some of the signage will be preserved to give the lot “a vintage gas station feel.”

The property sits close to the shores of the Housatonic River. It also abuts the narrow but long Stanley Park, which stretches north from Cottage Street and is named after William Stanley, who made Great Barrington the first place to be electrified by the use of alternating current.

The board approved the license request unanimously.