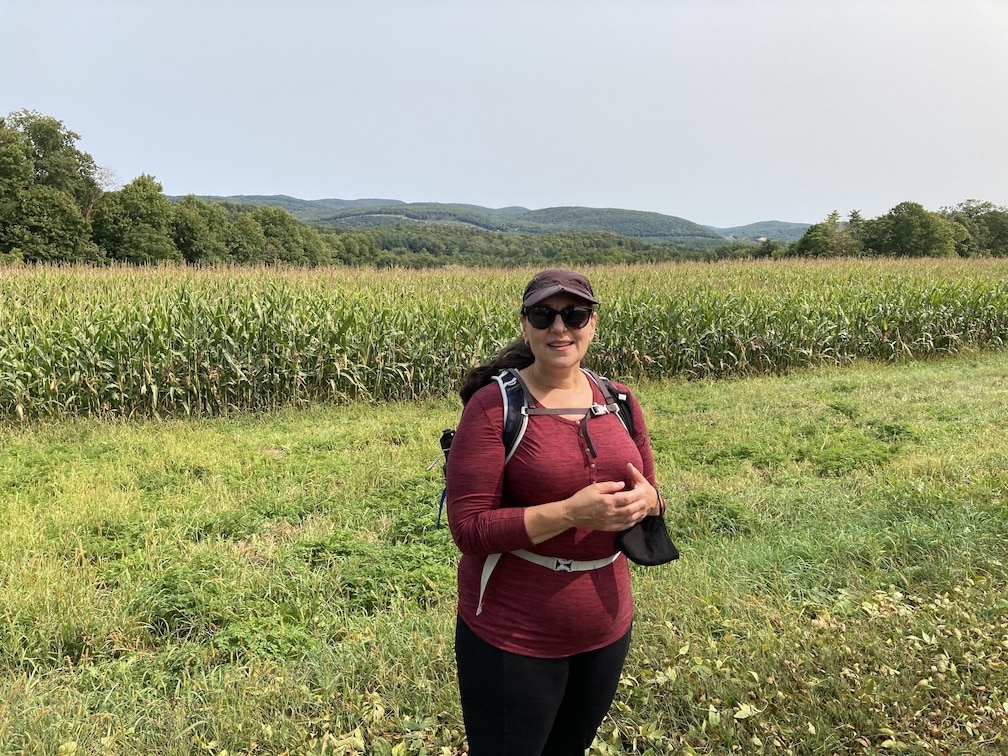 Mindy Miraglia, founder of Berkshire Camino LLC, pauses in front of a cornfield on Summer Street in Lee to talk about her pair of pilgrimages across Spain's El Camino de Santiago. Photo: Hannah Van Sickle

Lee — Sept. 16 is an auspicious date for Mindy Miraglia. On this very day last year, she was in Spain traversing El Camino de Santiago for the second time; Miraglia logged 17 miles that day, her longest ever, and she also suffered an injury that, while unbeknownst to her at the time, meant her pilgrimage was nearing its end. Still she walked along “the Way of Saint James,” inviting acceptance as to what might unfold next while contemplating the 1000-plus years’ legacy of the very path she traversed. Fast forward one year, and Miraglia is back in the Berkshires where, as a burgeoning entrepreneur, she is inviting visitors and locals alike to join her in “unplug[ging] to connect.” Berkshire Camino, inspired by her pair of pilgrimages across Spain, is Miraglia’s way of helping others to “create spaciousness in life” despite the hustle and bustle, all within the confines of Berkshire County.

“There’s real juice in the experience of a pilgrimage,” Miraglia told me earlier this week as we embarked on an abbreviated leg of Berkshire Camino’s Town-to-Town walk from Lee to Lenox. She sees myriad parallels between the Berkshires and Europe, chief among them “our charming towns [the potential of which] is unfolding.” We set out, just as the clock tower at High Lawn Farm struck noon, and followed the cornfields along Summer Street. Sweeping views of sun-drenched verdant hills and the Tudor-style Cranwell mansion in the distance surrounded us before we ducked beneath a canopy of trees shading the path toward Laurel Lake. There, after being met by a noisy flock of geese on the water, we picked up a woodland path toward Plunkett Street “as the crow flies.” A copious carpet of pine needles, punctuated by dappled sunlight, took us to the edge of the Mount, home of Edith Wharton, who was reputed to have traversed El Camino twice herself — first, with Walter Berry, in 1925 and again in 1928. A diary chronicling the first trip inspired an unfinished essay of the journey titled “Back to Campostelo.”

“How we observe, and move, teaches us how we do life,” says Miraglia, who, when curating her walks, seeks to incorporate disparate landscapes: Each route traverses portions of town and sections in the woods; she aims to include farmland in each as well as one historic site. Still, “no two walks are the same,” Miraglia pointed out in a nod to the changing routes, seasons and “cast of characters” that show up on any given day, which, as she learned on El Camino, is the result of synchronicity. “The people you encounter are the people you are supposed to meet,” she explained, another indicator of how being present is of utmost importance. There are moments of ease, erupting from the common ground that is the path, as well as space for struggle (although the group’s pace is set by the slowest walker and a second guide serves as sweep, taking up the rear at all times). The ultimate goal is balance, something missing from many people’s lives as life becomes increasingly hectic.

Miraglia has been honing the craft of group dynamics for decades. She invites participants to “drop into the experience” of pilgrimage through her use of several mindfulness practices. An opening circle for participants, in which introductions happen Camino-style (as in, “I’m Mindy from Massachusetts!”), not only sets the stage but also “creates a bubble” for the facilitated experience. Miraglia invites guests to consider a trio of tasks for their journey together: to walk with intention; to walk with curiosity; and to let something go. And then the group begins their walk in silence.

Each year, thousands of pilgrims make their way along El Camino de Santiago, a 500-mile walk across Northern Spain. The journey, of which there are seven well-established routes, leads to the cathedral of Santiago de Compostela in Galicia, where, according to tradition, the remains of St. James — one of Jesus’ first Apostles — are buried. While each pilgrim is driven by a different purpose, a common theme is evident: Many are at a crossroads in life, and walking El Camino can be cathartic and unburdening. For Miraglia, she was divorced and facing career and financial uncertainty. Rather than focus on what she did not know, she chose to lean into what she did know in her gut: “I needed to take account of where I was in life, and to take time to ask myself, ‘… what will you do with your one precious life?’ as urged by poet Mary Oliver.

Over the course of two different pilgrimages — the first in May/June of 2018 and the second in August/September of last year — Miraglia tackled “self-limiting beliefs about what [she] was capable of.” It is part of the unburdening process associated with the Cruz de Ferro —an iron cross located between the towns of Foncebadón and Manjarín, on the Camino Frances — where a growing mound of rocks pays homage to the weight of myriad burdens left by pilgrims over the centuries. “Letting go creates space to invite something in,” Miraglia explained of a practice she incorporates into every walk: Carrying one leaf, acorn, or pinecone — and then dropping it into a stream at the end — is symbolic of the impermanence that is nature, that is life.

Today, Miraglia is no doubt reminiscing: about El Camino, her pair of pilgrimages, her now-dear friend Valerio. And pizza: the very food she dreamed of while approaching her hostel for the night on Sept. 16, 2019. “The sky was ominous, with thunderstorms coming up over the ridge,” she recalled of their descent into a village while a storm took shape in the distance. “I dug really deep that day,” she said, adding, “I would not have made it without [Valerio] showing up.” This, at the end of the day, encapsulates the Camino magic Miraglia speaks of so openly, one that serves as a metaphor for each of our respective life journeys in general: “Value the time you have with the people you encounter on your path, and graciously part ways when it’s time.” Her plan for today, to honor the aforementioned auspicious date, is to eat pizza and reminisce; aside from that, she is eager to see what will unfold next for her life, her business, her path. “I’m just leaning into it like I do the pilgrimage. It will reveal itself.” To experience Berkshire Camino for yourself, visit berkshirecamino.com.