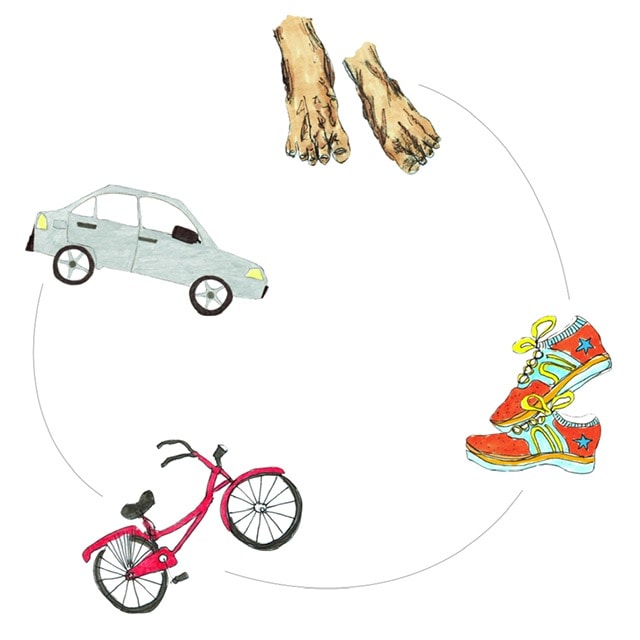 Give me your tired, your poor, your huddled masses yearning to breathe free, the wretched refuse of your teeming shore. Send these, the homeless, tempest-tossed to me!

I lift my lamp beside the golden door!

– Emma Lazarus, inscription at base of the Statue of Liberty

Great Barrington — For Jonathan Ahouti, the American dream started with a new pair of shoes. He’d arrived in the U.S. in 2002, to participate as a deaf long jumper in the Special Olympics. He’d left his village in a small West African country in an old pair of worn out sneakers. He’d have been better off competing barefoot. By 2013, he was living in Great Barrington and the staff at Construct, Inc, where he’d accessed transitional housing, had gotten him shiny new, colorful sneakers. With good shoes, he could get himself from here to there comfortably. Construct then helped him get a bicycle. Once he had a bicycle, Jonathan could get himself to and from a job. Once he was working, he was able to save up to buy a car. Now he gets himself to and from his full-time job in that car.

“Barefoot, to shoes, to bike, to car. That’s the progression Construct made happen,” says Jonathan’s long-time friend and advocate Jill. Today he is living in permanent Construct-built housing in South Berkshire County. He supports his wife Fatima and future athlete and fearless toddler Sophia. The couple is expecting a son in September. They moved into their two-bedroom, fully ADA accessible apartment in April 2018, just before Sophia’s birth. (The names of everyone this story, unless noted otherwise, are pseudonyms.)

Jonathan and Fatima come from neighboring French-speaking nations, and met at a school for the deaf, where they communicated using French Sign Language. Jill says that conditions for deaf people in their home countries were oppressive, and services minimal. As they only deaf members of large families, they did not receive much support or understanding.

(A 2018 study published in BMC Public Health by NYU’s Janet Njelesani found that, “in West Africa violence begins the day children with disabilities are born, as they are seen as a curse from God and do not deserve to live — infanticide is a practice that remains in certain regions. The study also found that all children with disabilities experience some form of violence from parents, teachers, peers or community members.” Jonathan and Fatima are applying for asylum in the US, making their argument based on the conditions they would have to live under at home.)

The two friends reconnected over Facebook years later, when Jonathan was living in Massachusetts, and Fatima was still in Africa. He encouraged her to join him, and they married.

Jane Ralph (her real name), Executive Director at Construct Inc., told me that Jonathan started out in their transitional housing, then became an employee on the maintenance crew, and, in 2018, moved into the new apartment. I asked Ralph if she knew Jonathan personally. “Oh yes,” she replied. “He is universally loved. He’s a sweetheart.”

The agency’s fiscal eligibility requirement for housing is a family income of 60 percent or less of the area’s median for their household size. (For a family of four, this would mean an annual income of about $33,000 or less, according to the most recent census data.)

Construct also has set-asides for vulnerable populations, such as people with mental health problems, or those coming out of domestic violence situations, or who are chronically homeless.

Though their current apartment is permanent housing, chances are good that one day Jonathan and Fatima will be able to purchase their own home. Says Ralph, “We’ve had over 20 households over the past decade go into home ownership.” (The need for affordable housing is pressing, however. Within the 15 Southern Berkshire towns that make up their primacy service area, Construct has a waiting list of over 500 names.)

Jill has known Jonathan since soon after his arrival in the country. She helped him relocate when he ended up homeless in Hartford, Connecticut. Why here? I wondered. Why not Boston, New York, Springfield, Worcester? Weren’t there much better resources for deaf immigrants in the larger New England cities?

Actually, no, Jill said. “It’s easier to make things happen in a smaller community. We know each other. There’s less red tape.”

Ralph agrees. “The plus here is an economy of scale that is more manageable than a metro area. We know the folks at VIM, we work with Fairview, CHP, mental health providers.”

Jonathan and Fatima’s success story today — car parked outside and apartment whose rent they pay on time and which comfortably houses a growing family — was made possible by the very hard work, and very long hours, of many people, coordinating their assistance among many local social service organizations.

Berkshire Immigrant Center helped with documentation, and Literacy Network stepped in to assist with language, and these days, the Pediatric Development Center’s early intervention educators comes weekly to work with Fatima and Sophia at home. United Cerebral Palsy provides an equipment program through which they were able to access, among other things, a baby cry light, so Jonathan and Fatima would know if Sophia needed them in the night.

The nexus of support for people like Jonathan extends to state agencies and banks, as well. “We work with Berkshire County Regional Housing Authority, which has a strong consumer education project,” says Ralph of Construct. “Through Greylock Federal Credit Union we offer micro loans. Tenants pay them back and the interest rate is very low because we found a donor to guarantee the loans. This is a chance to rebuild your credit. All the folks participating have paid off their loans or are current with their payments.”

But shelter and physical health are the two most basic human needs, and staff at Construct and Volunteers in Medicine, which has worked with Jonathan since the beginning of 2015, have done the lion’s share of the care coordination that has gotten Jonathan and Fatima to where they are today.

Ilana Steinhauer (her real name), Executive Director of Volunteers in Medicine, says Natalia, their Patient Services Coordinator, works fulltime coordinating services with other agencies, and she worked closely with Construct on getting Jonathan and Fatima’s documents together for their current housing.

When Fatima was getting ready to give birth, VIM staff went into overdrive, spending up to four hours a day on her case. Steinhauer says that Judy, Fatima’s ASL interpreter, worked nearly fifty hours over the days when Fatima first went into labor and gave birth at Fairview Hospital. Through the LifeWorks Doula Collective, VIM was able to procure a doula to work with Fatima during pregnancy and labor. When the new family was ready to go home, a VIM volunteer picked them up from the hospital. (At that stage, Jonathan didn’t yet have a car.) The stroller now parked in their kitchen was donated from some place or other.

All the time and effort are worth it, Steinhauer says, because of the end result. “They [Jonathan and Fatima] don’t just want to be here; they want to thrive. They want to contribute to the economy. This is an example of what it takes to make something happen. It’s also a great example of how independent you can get.” Steinhauer says it’s her mission to establish the sort of care coordination that worked for Jonathan and Fatima, working to break down traditional siloes. “Coordination has to be a priority in general to help people thrive. If we can’t all work together, we won’t have successes like this.”

Jonathan and Fatima now use VIM only for dental care, while their medical needs are met at Community Health Programs. VIM staff continue to help Jonathan with job applications and building his financial literacy. More important, Jonathan, Fatima and Sophia are also just their friends. “Mostly we see them because they bring in the baby, show us baby pictures, and play and spend time with us as a community.”

Steinhauer estimates that 80 percent of her agency’s clientele are immigrants. On Thursday, July 25thalone, she says, 20 out of 21 patients seen at the VIM clinic were non-native born U.S. residents.

But for all this wide support net, it’s been a long road for Fatima to make successful connections, even with other deaf people. French Sign Language and American Sign Language are as distinct from each other as French and English, so in 2016, when Jill first met Fatima and tried to sign with her, Fatima kept her hands in her lap, silent. Her large eyes were downcast.

On the day of my recent visit, though, Fatima’s large eyes were smiling, and her hands moved back and forth expressively to answer my questions. I asked her if she likes living here. She offered an enthusiastic yes and explained that the support she’s received in this country would not be possible in Africa. She does not feel homesick and hopes for her children to become fully integrated members of the South Berkshire community.

Fatima spends her time caring for Sophia and their home, and video chats regularly with her family in Africa. Fatima had earned a certificate there in hair braiding, and since arriving in Berkshire County has worked in that capacity here and there. But she doesn’t expect to seek a full-time job until her children are older.

When she does return to work, though, she will likely have a hard time getting there. Her husband leaves early with the car, and the closest public bus stop is a mile from their home. (It struck me, while speaking with Fatima, that the villagers I lived among in the remote mountains of Papua New Guinea had better access to public transport than do hundreds if not thousands of residents of Berkshire County; in PNG there was a bus stop within a three minute walk of my village.)

Community gardens in the center of the Construct apartment complex are full of lettuce, and flowers these days. Jane Ralph of Construct says they’re planning to install a playground. Fatima hasn’t yet participated in the garden, but her children will surely appreciate that playground. For now, Sophia, who is not deaf, visits her friends at VIM, and gets home visits from the early intervention educators, who are working with her on early language production.

She also, of course, communicates via American Sign Language, and her favorite sign to make is fingertips to lips with a flat palm, followed by hand opening outward, toward the receiver. Thank You.