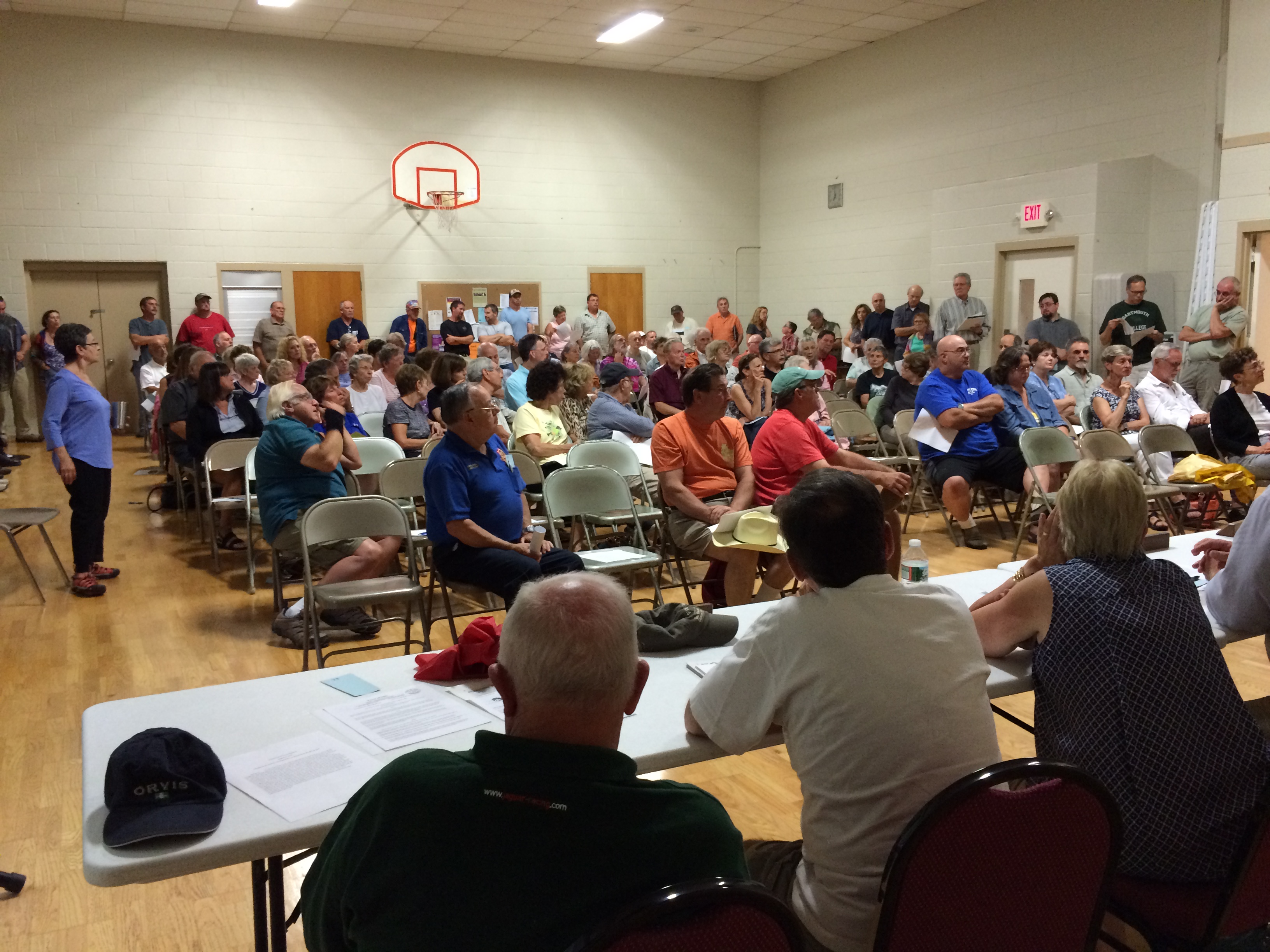 Otis – Within a year, this hill town – population 1,612 — will become the greenest community in the Berkshires, with electricity for its municipal operations and school district supplied by wind power.

By a convincing 83-12 margin, voters in a packed special town meeting Tuesday (August 4) authorized a $6.4 million, 20-year general obligation bond that will pay for the purchase, design, construction and installation of a 1.7 megawatt wind turbine that is predicted to save the town up to $100,000 annually in electricity costs and pay for itself out of the surplus energy that it provides to regional municipalities and school districts, such as the Lower Pioneer Valley Educational Collaborative.

“At no time have we planned for town taxpayers to pay for any of this project,” the chairman of the town’s Energy Committee, Larry Gould told the crowded Town Hall meeting room during an information session that preceded the vote. “This bond is for the financing of the wind turbine, which will be paid for by the project itself. The town will use only 5 percent of the output of the turbine, and we can sell and trade the rest to other entities.”

Gould noted that under a federal clean energy program the town had also been approved for a Certified Renewable Energy Bond for the project, with the government providing a $2.3 million subsidy, which includes paying 70 percent of the interest costs over the 20-year term of the bond.

He added that with income from the turbine the town will “zero out our electric bill,” since the town consumes only 5 percent of the kilowatts that will be produced by the wind turbine.

And he pointed out that the town had been besieged with inquiries from other Berkshire towns – Great Barrington, Sandisfield, Monterey, Southwick, among them – about purchasing power from Otis.

“They wanted to buy our power, but they’re not in our network,” he said. “But the Lower Pioneer Valley Collaborative said they’d buy every bit of excess power. If we had ten turbines, they’d buy 10 megawatts.”

The 4-year process to develop the plans for an alternative, green energy resource for the town has been supported by at $400,000 grant from the Massachusetts Clean Energy Center.

While considering alternative energy sources for the town, the Energy Committee rejected a proposal from a Connecticut-based solar energy speculator to build a multi-megawatt solar array forested land.

“The wind turbine is better than mowing down 200 acres of trees for a solar array,” commented Chris Bouchard, former highway superintendent and member of the Energy Committee, in a conversation at the conclusion of the meeting. “The wind turbine has minimal impact to the environment for the same amount of electricity.”

Gould explained that the large, 1.7 megawatt turbine, to be built by General Electric, will be situated on quarry property given the town by Ed Williams, owner of Williams Stone where a smaller turbine was installed and became operational in 2009.

Gould related that the committee had examined three parcels for the turbine, but had determined that the site off Algerie Road, 2,300 feet from the nearest residence, would be most economical because it would required less than 1,000 feet of access road.

During the information session, Gould also addressed concerns of residents whose property was adjacent to the proposed turbine.

“How tall is it?” asked Barbara Drosnin, whose property is below the ridge where the turbine will be located.

“How many stories is that?” Drosnin continued.

“It’s about 40 stories, if it’s 10 feet per story,” Gould replied. But he assured her that she would not be able to see it.

In answer to questions about whether Eversource Energy, the operator of the grid, could refuse to accept the power from the Otis turbine, Gould replied: “Eversource did an impact study. There is no impact on their lines, and no indication at any level that they can refuse to take the power.”