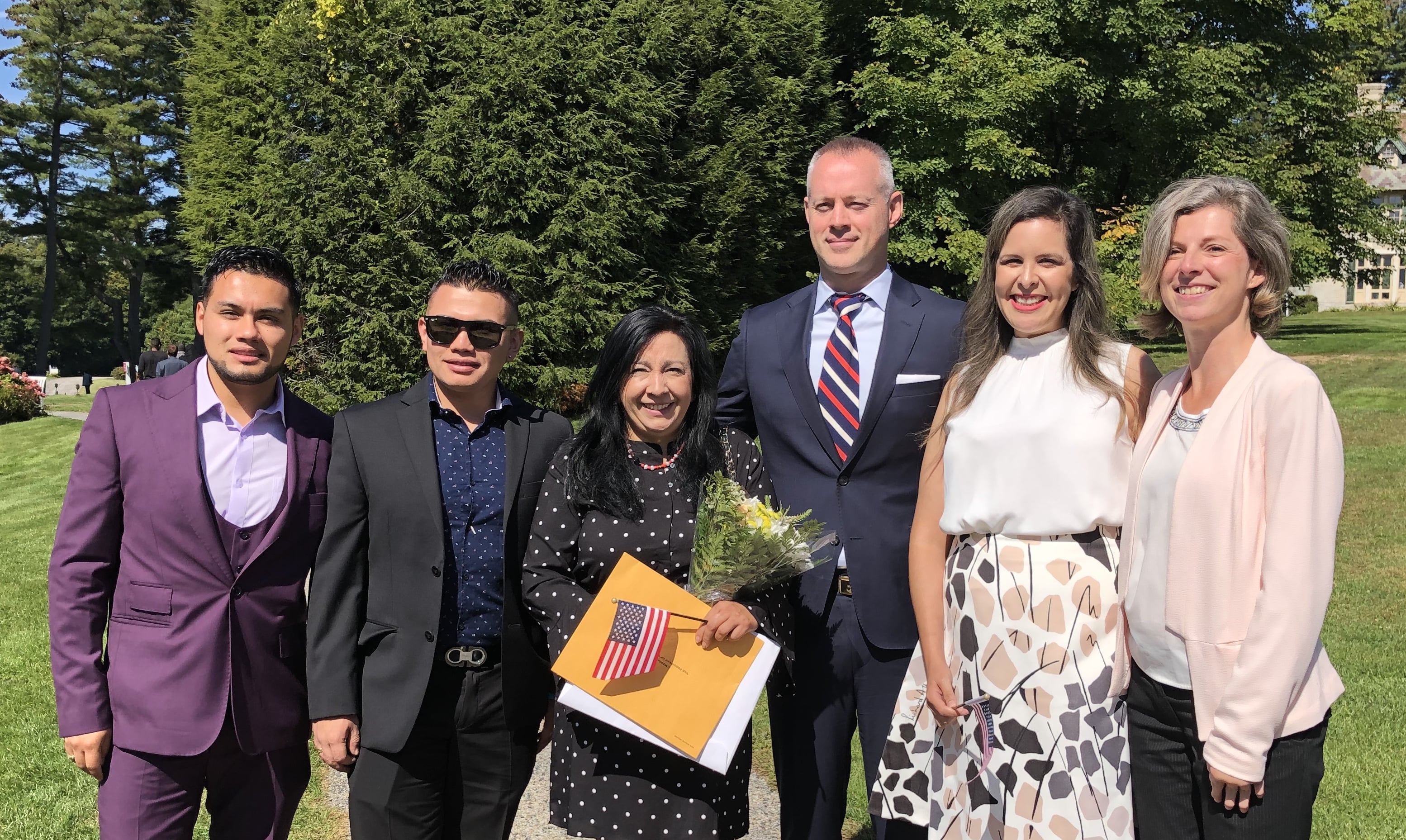 Stockbridge — Citizenship and voting – hallmarks of our democracy — matter deeply to Otis resident Viktoria Seavey, a native of Hungary, who became a naturalized U.S. citizen on Friday, September 20, in a ceremony held at the Norman Rockwell Museum in Stockbridge, Mass.

I recently spoke to Viktoria about her citizenship journey and she told me that she “can’t wait to register to vote.”

The Literacy Network of South Berkshire (LitNet) had just announced the Matthew and Hannah Keator Family Scholarship for New Americans when Viktoria immediately applied. She was elated to get some financial help which enabled her to start the process of filling out the application for citizenship.

Next she had to prepare for the rigorous citizenship exam, and LitNet was again at the ready, matching Viktoria with LitNet tutor Claudia Coplan. Their many two-hour sessions over the course of several months gave Viktoria the opportunity to discuss and master the answers to 100 possible questions about American history and government that are included on the American Citizenship Test. Viktoria was eager to learn and discuss the topics covered with her LitNet tutor, and a bond of friendship developed as they studied together. The preparation paid off. Viktoria was successful, as she completed the interview with an immigration official in Springfield and answered all the citizenship questions correctly in the oral exam.

Viktoria’s life changed in 2010 when she attended a seminar in Budapest and met an American counselor/trainer there named Adam Seavey. It was love at first sight. After visits back and forth between Hungary and the U.S., Viktoria and Adam married, and they now live in Otis where she runs her own holistic health/lifestyle coach business, Viktory Wellness. When she came to the U.S. from Hungary in 2010, she already had college degrees in engineering and social work as well as a year of English language study and had an established private counseling practice.

After moving to the Berkshires in 2011, Viktoria worked for several years as a facilitator helping families with autistic children. She then joined the staff of Berkshire Community College’s Adult Learning Program as an ESOL teacher. She also taught classes there in digital literacy and math.

More recently, Viktoria applied her counseling skills to a class on Intuitive Painting, a methodology she developed for those living with chronic illness. The class is given at Berkshire Medical Center as part of their Integrative Health Program for cancer patients and their caregivers. That same technique has become an integral part of Viktoria’s latest venture, Viktory Wellness. Now American citizenship can be added to her resume, an accomplishment that Viktoria is very excited about.

Every citizenship story is unique but there are common threads, especially the desire to be part of the fabric of the Berkshire community and to participate fully in our election process. Viktoria sees voting as both a right and a responsibility and she is eager to exercise that right. She plans on registering immediately after the ceremony at the Rockwell Museum and is looking forward to casting her ballot on Election Day in 2020.

The Literacy Network takes pride in the achievement of every one of its adult learners but is especially proud this week of the five LitNet-tutored men and women who were awarded citizenship on September 20. Besides Viktoria Seavey, that group includes Aida Avila, Sylvana Proano, and brothers Jeferson Alexander Vera and Jonathan Vera.