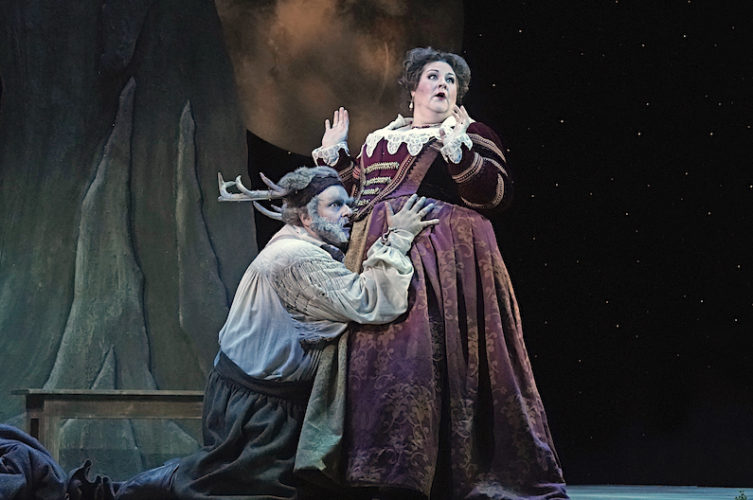 Who would have thought that another production of Berkshire Opera Festival (BOF) could charm and delight more than its fabulous “Don Pasquale” of the pre-pandemic summer of 2019? Well, with its even-more-fabulous “Falstaff,” BOF has done just that: nine world-class principals; a spirited chorus of 16; a grand 30-piece orchestra; and non-stop, unified comedic interpretation. The two-year wait was worth it.

The sturdy Italian classic (first performed in 1893) is one of two Verdi comedies and his last opera (written at the age of 80). Based mostly on Shakespeare’s “Merry Wives of Windsor,” “Falstaff” has a couple of subplots that thread through this 2-hour, 40-minute production, but basically tells the tale of a big, fat buffoon of a nobleman, Sir John Falstaff, whose arrogance and ego delusionally lead him to scheme for the affections of two married Windsor wives, Mrs. Alice Ford and Mrs. Meg Page. Alice particularly is onto Falstaff’s game and engages not only Meg and her ladyfriends, but also unsuspecting husbands and townfolk to humiliate him publicly.

The principal singers are uniformly talented, but the standouts are Romanian-born baritone Sebastian Catana who plays the title role with just the right degree of self deprecation and not too much pathos, and soprano Tamara Wilson who plays Alice Ford with superb timing; her facial expressions are worth the price of admission alone.

The orchestra is enthusiastically conducted by BOF Artistic Director and Co-founder Brian Garman; it’s fun to watch him silently mouth the lyrics as he conducts from a “pit” created at the pit-less Mahaiwe (the first three rows of seats were removed especially for this production). The orchestra is big, bright, and just-the-right amount of bold, perfectly appropriate for what Toscanini regarded as Verdi’s most versatile score. Distinctively, “Falstaff” has no overture and really no arias. It’s action from the get-go, and director Joshua Major’s staging matches perfectly. Elizabethan costumes by Charles Caine sport colorful flair; the wittiest is Falstaff’s pastel-accented foppish finery in which he shows up to seduce Alice.

Stephen Dobay’s set design has a practical, simple elegance. His set for the moonlit woodland scene where Alice and Windsor townfolk are costumed as goblins and fairies to trick Falstaff contributes to how this “Falstaff” emerges as a magical parable. Falstaff admits that he’s a joker, as is everyone else. The show’s exuberant fugue celebrates that we are, too. With its “Falstaff,” BOF spreads rapture around.