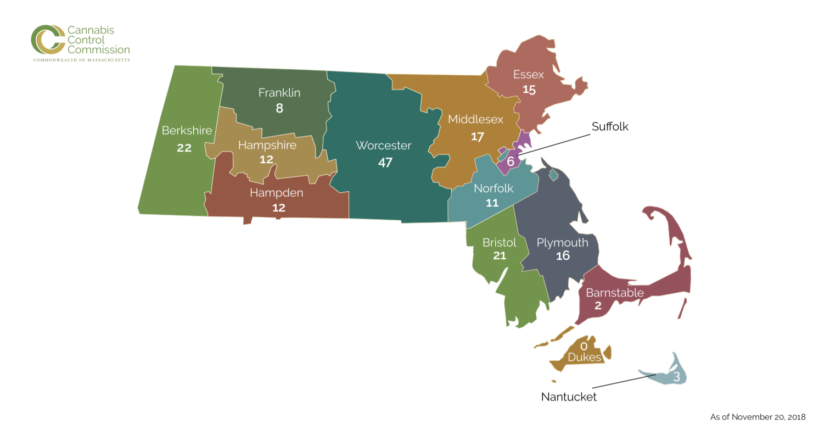 Great Barrington — The media generated by Massachusetts’ long-awaited rollout of legalized recreational marijuana has focused mostly on the predicted dollars to be generated by the industry. Boston.com claims it could be a “potential 1.5 billion dollar a year market.” With a handful of successful businesses, Great Barrington alone could see its town coffers expand by close to a million dollars a year.

Stores had initially been predicted to open statewide in July, but the first two, Cultivate in Leicester and New England Treatment Access in Northampton, just opened in November. They generated $2.2 million in their first two days. (Cultivate’s opening also generated traffic nightmares that led to an emergency community meeting, which you can watch part of here.) Revenue Commissioner Christopher Harding recently told the Massachusetts Ways and Means committee that his department predicts at least $44 million in marijuana taxes this fiscal year, despite the delays. (Recreational marijuana is subject to a sales tax of 6.2 percent and excise tax of 10.75 percent, on top of local-determined fees.)

The weedgates will soon be opening in Berkshire County wider than anywhere else in the state. As of November 20, the two counties matched for the highest number (10) of completed application packets from erstwhile cannabis business owners were Berkshire County and Worcester County. Berkshire, at just over 100,000 people, has less than one-sixth the population of Worcester, with just under 800,000. Overall, Berkshire County holds 11 percent of the state’s outstanding applications, with less than 2 percent of its population. (See the breakdown here.)

While, as a parent pointed out, “there’s only one ice cream shop in town,” if all applicants and interested parties are eventually approved, there could be as many as five cannabis outlets in and around Great Barrington.

Like many local people I’ve spoken to, I didn’t think much about what pot legalization might mean—that is, until recently, when I came upon an article posted by my writing school and Facebook friend Melissa Matthewson. Melissa owns a small CSA farm in southern Oregon, on which she and her husband, after that state legalized in 2014, considered growing marijuana themselves. (They decided to stick with vegetables.)

On Oct 22, CannabisWire published her article, titled “When Oregon Blew It.” Between Oregon’s legalization in 2014 and California’s in 2016, the state went through a rapid boom and bust. Without much in the way of state regulation, and not nearly enough governmental manpower to stay on top of the industry, out-of-state growers flooded in and went to town. “Oregon was completely overwhelmed,” she told me in an interview in November. Outside investors erected enormous greenhouses that lit up the valley 24 hours a day, antagonized neighbors, strained the area’s water supply, crowded out small farming operations and reduced wildlife habitat. No one from the state came to check up on how facilities were operating or where the products were ending up.

“You can’t make any money in the legal market unless you are huge, scaled up. It was industrial scale production that could have been located in Medford, our metro area. Another problem is that the dispensaries are involved in the production side, forcing smaller growers to compete by selling into the black market … It was tearing apart our community. It’s amazing to watch how it’s shifted in the last two years: traffic, theft, violence. We’ve had theft on our farm. We were getting illegal camping all up and down the Applegate River, a sensitive watershed. I was having to say ‘you can’t camp here.’” Melissa’s kids stopped riding their bikes on the road. She and her husband considered selling their farm.

Tensions reached their peak in the summer of 2017, when California was gearing up for its own recreational pot industry opening. People started selling off their land. “Now properties are just sitting there, empty and for sale.” These days, many growers have given up on cannabis and turned to hemp. But farmer Michael Johnson, chief operating office of Siskiyou Sungrown, told her, “At the end of the day, hemp is heading the same way that cannabis is—with rock-bottom pricing and a saturated marketplace.”

The news from Oregon was pretty alarming and led me to look into how my state was handling legalization thus far. Massachusetts, as my contractor husband often bemoans, has a well-earned reputation as one of the most scrupulously regulated states in the union, and the rollout of recreational marijuana operations, overseen by the Cannabis Control Commission, has accordingly moved at a snail’s pace. (As one industry insider put it, “They are thoughtful to the point of over-thinking.” Another was more blunt, accusing the state of “dilly-dallying” and intentionally de-prioritizing cannabis.) The state’s rollout is over a year behind Nevada and California, the other 2016 legalizers.

One quick scroll of the website for the Massachusetts Cannabis Control Commission goes a long way toward disabusing citizens of concern that the state is cutting corners. I was met on the CCC’s homepage by four rotating panels; a hotline for those concerned about a substance-addicted loved one, a video called “Drive Sober or get Pulled Over” from the Executive Office of Public Safety, a PSA on how to talk to kids about cannabis, and a link to a “Social Equity Program” designed to prioritize minority business applicants. The public is invited to attend meetings of the commission and its various subcommittees.

Massachusetts is clearly no Oregon. It is overseeing the rollout process with great care, and taking public safety and health concerns seriously. (It remains to be seen how individual towns will be judged in the oversight department.) There is no way to tell what legalized pot will look like here in, say, five years. Several town leaders and businesspeople— even a substance abuse counselor — hope cannabis legalization will lead to good things locally, that it will bring into the light what’s been underground and make it more, not less, difficult for teens to access pot.

In terms of commerce, maybe all 22 stores that have completed their state paperwork will open countywide and, through natural selection, be reduced to half as many in no time—or we’ll be so successful in turning the county into a “seed to table” “canna-tourism” destination that we’ll be on our way to reversing our aging population problem, with a new generation of weed enthusiasts inspired to relocate here. Maybe the Smithsonian will dub Great Barrington “The Highest Small Town in America” of 2023.

Since Berkshire County may soon contain an outsized proportion of the state’s cannabis business, it seemed like a good idea to study the many complicated questions the subject raises. Over the next weeks, The Edge will publish a series of stories that will explore recreational cannabis from business, public health, public safety and regulatory perspectives, among others.

Watch for the first story later this week, focusing on the regulatory angle and how different Berkshire County towns are handling it.