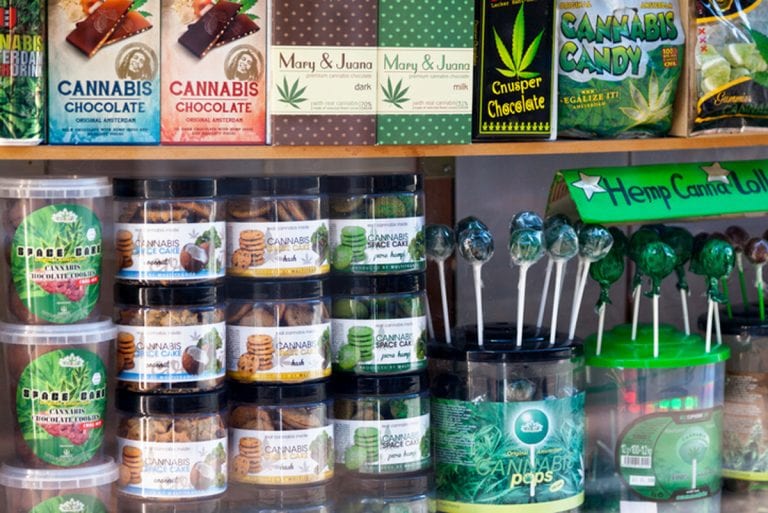 Editor’s note: This is the seventh in a series of articles examining the implications of the legalization of marijuana. Part I, Part II, Part III, Part IV, Part V and Part VI are also available.

Great Barrington — New Jersey’s efforts to legalize marijuana have collapsed for the time being, despite the full support of the new Gov. Philip Murphy and a Democratically controlled legislature. The issue there pitted Democrat against Democrat, with African-American lawmakers staking their opposition on public health concerns about marijuana becoming a “menace to their communities.” Also unable to reach an agreement with lawmakers, New York Gov. Andrew Cuomo has dropped his bid to include legalization in this year’s budget. Citing their “serious concerns about the lack of scientific evidence that supports recreational marijuana use by adults and young adults, the medical societies from New York, New Jersey, Delaware and Connecticut put out a joint statement last week against legalization in those states.

Legislators, doctors and regular citizens tend to worry most about marijuana’s potential to negatively impact the young. Despite the official prohibitions on studying cannabis as well as the resulting lack of scientific evidence, it is by now understood well enough that the human brain continues to develop until the age of 25, and cannabis can alter that development, resulting in adverse life outcomes.

Many of the Massachusetts Cannabis Control Commission’s regulations—including the requirement to have multiple ID checks at stores, products locked in safes overnight, seed-to-sale product tracking, child-proof packaging, and no cannabis imagery or lingo on signage—are designed to keep people under 21 from getting their hands, or focusing their minds, on marijuana.

States, schools and youth organizations use health surveys to measure rates of youth drug and alcohol use, among other things. Locally, the Berkshire Youth Development Project—a collaboration among the Berkshire United Way, Railroad Street Youth Project and Northern Berkshire Community Coalition, with support from Berkshire Health Systems—administers the biannual Prevention Needs Assessment Survey to eighth-, 10th-and 12th-graders. In addition to self-reported drug and alcohol use, the survey tracks students’ perceptions of the risks associated with use. Their answers are compared with those from 2017 and 2015 as well as with a national norm. 2019 results were recently shared with schools. 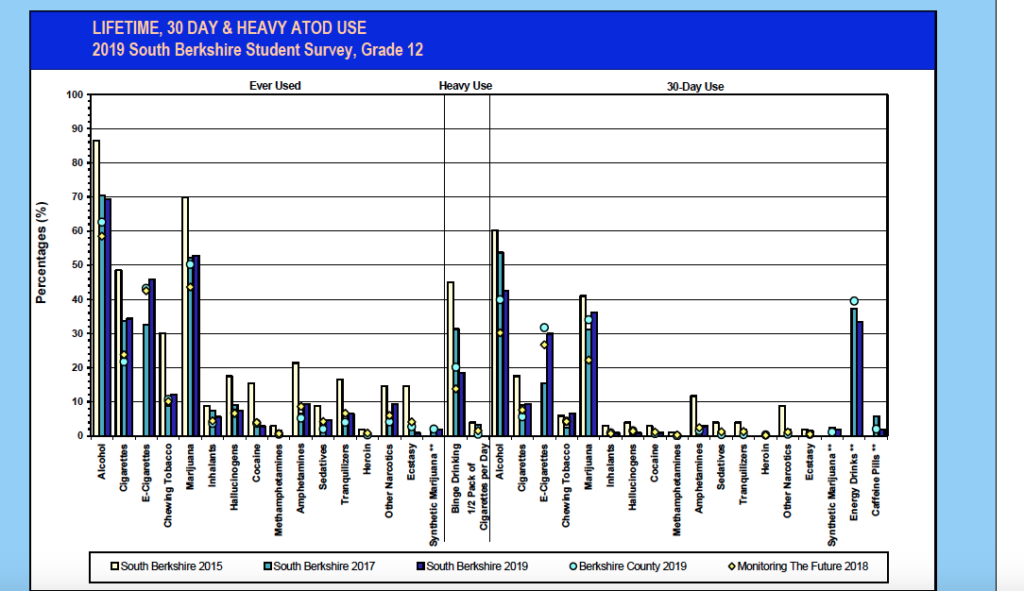 The caveat to those promising statistics is, with the exception of 30-day use among eighth-graders, they do represent small upticks from the 2017 results. Compared to their peers reporting via the national Monitoring the Future survey, marijuana use is on par or lower, except among 12th-graders, where it is higher. E-cigarette use was up across the board, which aligns with national trends.

Ninety-four percent of eighth-graders and 68 percent of 12th-graders think their parents would disapprove of marijuana use. About one-third of our 12th-graders and two-thirds of eighth-graders believe there is “moderate” or “great” risk in smoking marijuana once or twice a week. (Full results will be released to the public in May. If you are interested in finding out more, contact Chris Tucci at Railroad Street Youth Project.)

For clarification on why it makes sense to discourage youth from using marijuana, I contacted Dr. Nicholas Chadi, a pediatrician specializing in adolescent and addiction medicine and a pediatric addiction medicine fellow at Boston Children’s Hospital. He’s completing his training at Harvard Medical School, with a focus on 12- to 30-year-olds. Among his research interests are e-cigarettes (vapes) and marijuana. Dr. Chadi offered that one of the biggest hurdles he faces in treating teenagers who present with marijuana dependence problems is the widespread perception that marijuana is either harmless or beneficial. (Click here for a study Dr. Chadi and his colleagues conducted on the impact of medical marijuana legalization on adolescents)

Also problematic is the treatment of patients in Dr. Chadi’s clinic who present with marijuana dependence problems. “For drugs like opioids, there are good medications. We see kids whose lives are slipping and have all kinds of consequences. We try our best to help but we don’t have tools based on science to do that.” Those who start to use marijuana in adulthood have only a 9 percent chance of developing a dependence—lower than alcohol and other drugs—while teenagers who use are twice as likely to do so.

Though there is cannabis research going on, until the drug is taken off of the federal Schedule 1 list, says Chadi, it’s necessarily limited. In a possible move in that direction, the FDA recently approved the cannabinoid medication Epidiolex to treat children with seizures.

Also, Chadi says the National Institutes of Health are now two years into a 10-year study with the aim of determining, among other things, whether or not marijuana causes schizophrenia. The length and size of this particular study are promising, says Chadi, since often they don’t look at people for long enough periods of time to prove whether the marijuana/schizophrenia link is causation or correlation. This lack of clarity on the subject is “why there’s such a big debate” on that issue.

But research is still ethically fraught: “We can ask people if they use pot, and try to correlate that with brain or health problems. We just have to wait for people to use.”

Jim Mucia, licensed social worker and therapist at the Brien Center in Pittsfield, says his young clients are not kids toking up on the weekend. “This is smoking morning, afternoon, night. This is a coping mechanism. And they are getting the message that not only is it not bad for you, it’s good for you.”

Edible marijuana ingested in gummies, chocolates and cookies has gotten some special attention lately as the New York Times, CNN and other news outlets reported just this week the results of a Colorado study that found that though “edible cannabis only made up 0.32 percent of sales in Colorado from 2014 to 2016, 10.7 percent of cannabis-related emergency department visits at UCHealth University of Colorado Hospital were due to edibles.”For kids who come upon an edible and don’t know what to expect, this can be dangerous, since edibles can take an hour to kick in,” says Dr. Chadi. “It’s easy for a kid to try a gummy or cookie and say, ‘This does nothing,’ then take more and more.”

Of legalization and youth access to the drug, says therapist Mucia, “I have a hope it will help adolescent use, if they treat it like alcohol. I ask the kids who have pretty serious marijuana problems, ‘If you leave now and were to go get weed or alcohol, which is easier?’ They say weed. But the black market has to go away. If it does, maybe access to it will go down. The one problem with that hope is you can’t make alcohol at home, but you can produce high quality pot.”

What does Dr. Chadi think about marijuana legalization? “It’s a very tricky question. Depending on who you quote, you’ll get very different answers. Even among our team we don’t agree whether it’s good or not. The population needs to understand it’s not just a plant. It has potential consequences that will last a lifetime.”