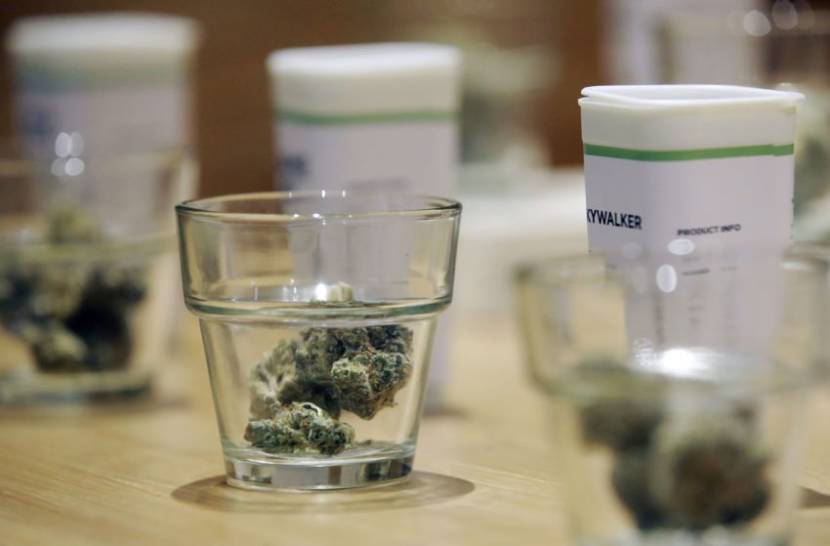 Cultivate in Leicester displays its wares on the first day of legal sales of recreational marijuana in November 2018. Photo: Steven Senne/AP

Editor’s note: This is the third in a series of articles examining the implications of the legalization of marijuana. Part I and Part II are also available.

Recreational marijuana is legal in Massachusetts, but it will be living in the closet for the foreseeable future. Though only three out of the 50 United States—Idaho, North Dakota and South Dakota—still impose a total ban on marijuana, as a nation, we’re still waging the war on drugs that started with the Nixon administration, and our policies reflect deep ambivalence.

At the federal level marijuana is—in 2018 as in 1971—classified as a Schedule 1 drug. Schedule 1 is the category reserved for the most dangerous substances that, according to the Drug Enforcement Agency, have “high potential for abuse, no currently accepted medical treatment use, and a lack of accepted safety for use under medical supervision.” Other Schedule 1 drugs include heroin, LSD, bath salts and ecstasy. (Fully approved by the U.S. Food and Drug Administration, however, is the blockbuster opioid OxyContin and its variants, the effects of which are identical to those of heroin, and which is estimated to be responsible for the deaths of over 200,000 Americans since 1999. To confront this epidemic, President Trump just formally appointed his “drug czar,” James Carroll, a lawyer who has no background in the public health or drug policy fields.)

Because no federally backed financial institution is willing to manage money earned with a Schedule 1 product, storeowners will have to deal in cash and debit cards for the time being. Tax burdens will likely be a much bigger headache for them. Cannabis businesses must follow an obscure 1982 law, tax code 280E, that denies anyone “trafficking in controlled substances” the deductions available to any other for-profit entity. The only deduction a retail marijuana store will be permitted to take on its income taxes is for the cost of goods. Those extra costs are just at the federal level. The state imposes a 6.25 percent sales tax, 10.75 percent excise tax, and most towns have selected to collect a maximum 3 percent local tax. Businesses hoping to turn a profit in Berkshire County are also encouraged to make a voluntary annual contribution of $10,000 to a local organization that deals with drug-related problems. (Railroad Street Youth Project in Great Barrington stands to benefit in this regard.)

Still trickier to navigate are the rules imposed on cannabis businesses by social media companies. Marijuana sellers are permitted to post content with the aim of education or advocacy, but not with the aim of promotion. How advocacy can be distinguished from promotion is anyone’s guess, and has predictably already led to problems. On Great Barrington’s own Theory Wellness’ Facebook page, administrators felt the need, on Dec. 2, to point out to their 2,000-plus followers the rules of the game.

“This account is for educational purposes for audiences who are 21+, nothing is for sale,” they wrote. “Comments regarding the sales or purchases will result in immediate banning. This is in accordance with FB community guidelines.” Someone posting on behalf of or in response to Cultivate, the retail marijuana store in Leicester that opened in November 2018, must have crossed this ill-defined line, because that business had both its Instagram and Facebook accounts shut down entirely, along with those of several other medical dispensaries around the state.

That’s the tip of the iceberg when it comes to the special rules related to the cannabis industry. Though Great Barrington might soon be hosting four or five cannabis retail stores, you are likely to have a hard time figuring out what they sell. As anyone who’s passed by Theory Wellness, just north of the Price Chopper Plaza in Great Barrington, knows, it’s difficult to guess from its name, dark signage and inscrutable geometric logo what sort of business is housed there. Health food store? Private clinic? Beautician’s spa?

Whereas Tom’s Toys’ windows are filled with toys; Church Street Trading Company’s are filled with clothing; and Gorham and Norton’s are filled with cheeses, fruits and bottles of champagne, pot stores must ensure “that all marijuana products are kept out of plain sight and are not visible from a public place without the use of binoculars, optical aids or aircraft.”

This, then, is our backdrop as recreational marijuana becomes as legal a commodity in Berkshire County as champagne, without champagne’s 85 years of legal precedent to build on. We are constantly reminded just how new this industry is and, as community meetings have shown, citizens are as all over the place on pot as our laws are. As one Berkshire County business leader put it, “One third of the people I talk to are excited about the potential, one third are terrified and one third don’t know what to think.”

We in our blue bubble reflect the country’s schizophrenic attitude about marijuana. This was demonstrated on the afternoon of Dec.11, when WAMC’s late edition of local news ran two consecutive stories. The first announced that the third retail pot operation, in Salem, had just received its final approval to open. The next story was from police in Manchester, Vermont, reporting the seizure of 50 pounds of marijuana with a street value of $200,000. The owners of the store in Salem stand to earn, if the success of stores in Leicester and Northampton are any indication, a lot of money, while the criminals busted with their illegal stash can go to jail for as long as 30 years and be fined as much as a million dollars.

Which brings us to the most brutal consequence of the war on drugs, which has nothing to do with onerous tax laws or weirdly empty shop windows: With less than 5 percent of the world’s population, the United States has over 20 percent of her incarcerated population, with the majority of those imprisoned on drug charges. The cumulative negative impact of this country’s criminal justice priorities of the past four decades can never be assessed. It is far too great for an accounting, and has hurt African-American citizens the most. According to the NAACP, “African Americans and whites use drugs at similar rates, but the imprisonment rate of African Americans for drug charges is almost 6 times that of whites.” Matthew Allen, field director for the Massachusetts branch of the American Civil Liberties Union, says, “Drug use should be approached as a social issue, not a criminal justice issue.”

On this front there are two pieces of good news. Included in the recently passed Farm Bill is a provision for the Department of Agriculture to regulate hemp, which is the fibrous part of the marijuana plant used to make, among other things, paper, fiberboard and rope. Perhaps this move signals a recognition at the federal level that if you can’t beat ‘em, maybe it’s time to join ‘em.

A bigger, though partial, success story is the passage of the First Step Act, criminal justice reform legislation that had Democrat Cory Booker embracing Republican Chuck Grassley, and the ACLU joining forces with the Koch brothers. It passed in December. Among the practices that will no longer be permitted is the restraint of pregnant and postpartum inmates, and the placement of inmates in prisons more than 500 miles away from their families. The act gives judges the leeway to impose reduced sentences on low-level, nonviolent drug offenders. It’s just the first step, however, because Democratic senators had to give up many demands in order to get sufficient Republican approval. One key demand that might have been a game-changer for dozens, if not hundreds, of Berkshire County families had been included in a bill proposed under former President Obama. As the New York Times reported Dec. 18, “The 2015 bill made all sentencing reductions retroactive to include those currently in prison, but the bill passed on Tuesday limits most of those changes to future offenders.”

If that retroactive provision had passed, we might have gotten one step closer to acknowledging and redressing the prosecutorial overreaches of the past all over the United States and also here at home. In 2004, the Berkshire County Drug Task Force and district attorney’s office rounded up the “Taconic 18” in the parking lot of the Triplex movie theater in Great Barrington. Among other punishments, mandatory minimum sentence was imposed on a 17 year old who traded 1.1 grams of pot for a $20 bill so he could buy a burrito. The “school” that qualified the parking lot as a Drug-free School Zone was a preschool program in the basement of the Congregational Church, closed for the summer and many hundreds of feet away. That kid, Mitchell Lawrence, spent two years in jail, and will be cursed with a criminal record for life. “The only thing unusual about Mitchell,” narrates a video (see below) about the case by the Drug Policy Alliance, “is the color of his skin. 97 percent of all people arrested in Drug Free Zones aren’t white.”

Look for more on both the social justice ramifications of marijuana legalizations, and the Taconic 18 in upcoming installments of this series.