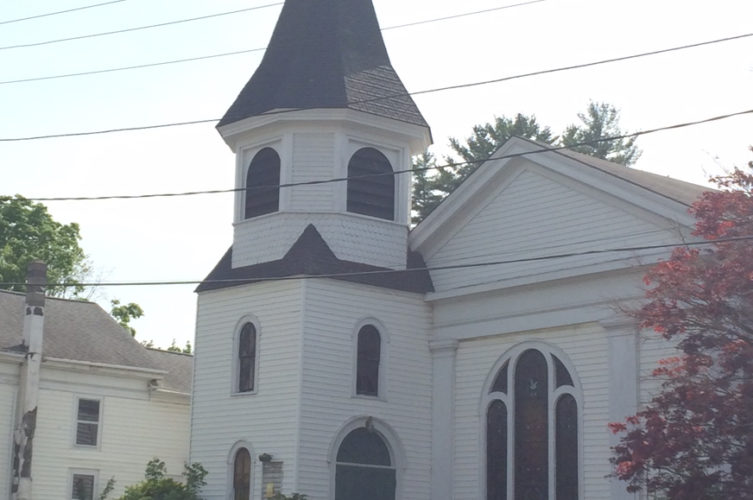 Great Barrington — Commerce will yet again overtake God, as what was once a church will become a place to eat and shop.

But the steeple stays.

The former Great Barrington Methodist Church complex on 198 Main St. is about two years away from becoming a development featuring a 79-seat restaurant, with three retail spaces, two offices, a residence, and an all-season outdoor food kiosk.

Redeveloper Paul Joffe, principal of GB Historic Renovations, LLC, is about to renovate his second church, and will do so in keeping with the local aesthetic. It won’t look like a church when he’s done with it, but “the building will look like it has always been there — with repairs,” Joffe said from his home in New Marlborough.

“It will look more like an old town hall rather than a church,” he added.

The work is already underway; the parsonage next door will be razed, and the Fire Department has already had a go at it, recently conducting smoke and other training exercises there. Work to the foundation will likely start this summer, and Joffe hopes to have the church structure raised up by the end of summer, he said.

Joffe, who has renovated six buildings of a similar age in Brooklyn, along with another old church in Kingston, N.Y., says he will apply a sensitive touch to the historic nature of the 150-year-old structure and its placement in a high visibility area of town. The neighborhood has seen fast growth in the last few years as dilapidated buildings have been spruced up and new retail and a popular eatery have drawn people to the area.

Joffe, who between development and construction work dabbles in journalism, says he will take down the old plaster walls and leave the structure and the inside of the old siding visible. “It hasn’t been seen in 150 years,” he said. He will bring wood in from his farm, large timbers of white oak and ash that will match the aesthetic of the building.

The large round stained glass window isn’t going to stay, however, since it is in bad shape. Joffe does plan to reuse it.

Joffe, who likes to do some of the actual labor himself, has ironed out his plans with town boards and, he said, has been helped by them. “Usually you have to reduce the project,” he said. “In this case the town and building inspector have shown me how I can better realize what I want to do.”

The old church complex is right next door to the latest mecca of locavore food culture, Prairie Whale. Owners Mark Firth and Bettina Schwarz have already said that they are excited about the new addition to the neighborhood. Firth, Schwarz and Joffe are talking about how to manage a limited and potentially challenging parking situation.

It is still unclear who Joffe’s new tenants will be, but he says he has seen “a lot of interest.”

There will be eight spaces total for rent, with three retail spaces below the restaurant, and two offices and a residence above it. The kiosk will be a “separate small store.” Whatever goes into the kiosk, he said, will be open year round.