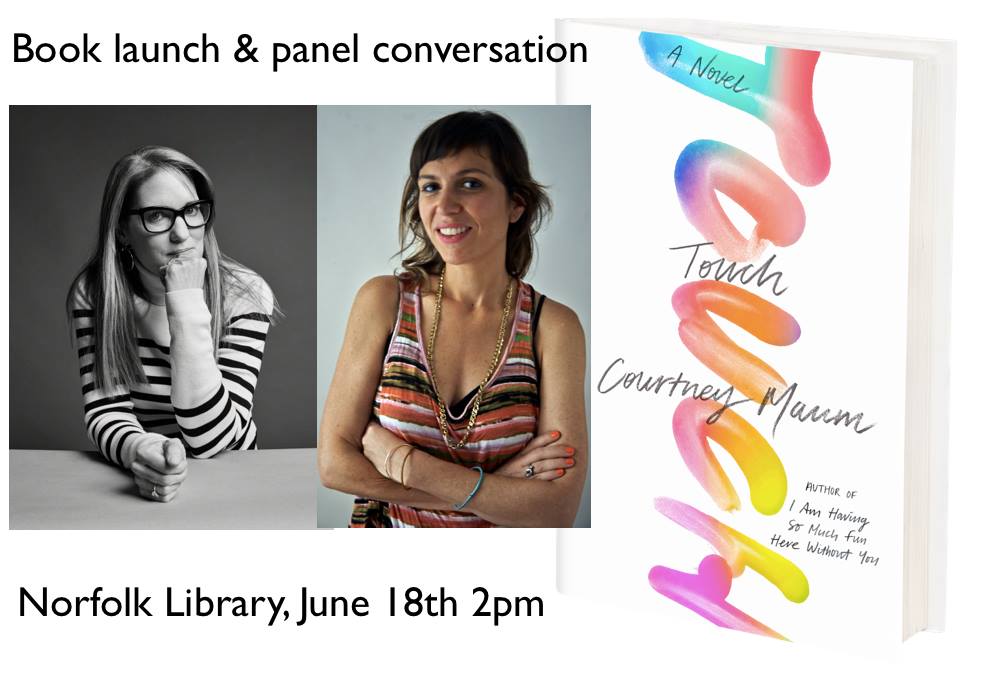 Norfolk, Conn. — Touch: A Novel by Courtney Maum, the exceptionally acclaimed author of I Am Having So Much Fun Here Without You, was released on May 30 and coincided with the launch of a 13-city book tour for the former Berkshire County resident. Maum and I had a chance to catch up, just days before her departure, and she characterized the whirlwind tour as having “pleasure involved and [there are] definitely perks. But it’s serious work.”

TOUCH tells the story of an international trend forecaster named Sloane Jacobsen who’s hired by a huge technology company to predict what’s next in tech. Problem is, she thinks the next big thing is touch: a return to tactility and face-to-face interactions. What ensues is, “A trenchant and wise portrait of what it means to be fully human at a time when the culture is trying its hardest to make us only partially so,” according to fellow author Teddy Wayne whose assessment feels spot on at the moment.

While Maum admits to being under a nearly constant barrage of requests while on the road, she will return to her home turf on Saturday, June 18th for an afternoon with trend spotter, lifestyle writer, and former W Magazine beauty editor, Jane Larkworthy, for an event at The Norfolk Library (Conn.). The book launch, signing and panel conversation will take place at 2 p.m. at 9 Greenwoods Road East in Norfolk.

HVS: Any piece of art or literature that is to be fully understood must be looked at in the context of when it was created; what details of contemporary life will need to be understood by readers of your book in the future?

CM: “This is a period in America, and also the world, where there is a great deal of fear running through the psyches of modern humans. [This book was written] during a time when lots of people were looking for solace and reassurance in the screens of their devices and at first they found that — and they found a sort of amusement and distraction — and then when we had a political upheaval with the election of Donald Trump, things changed and the answers people had been hoping to find weren’t in their screens anymore. [The book reflects] a time when people started to literally reach out for one another and try to use friendship and emotional intimacy as a way of healing rather than digital entertainment.”

HVS: While your novel is set in New York City, I imagine you holed up in both Litchfield and Paris (as your dedication suggests), writing fervently; how do the effects of these disparate locales, and your relationship to them, show up in your writing? 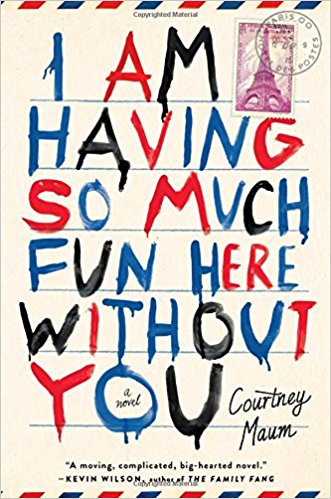 CM: “My home, which right now is Litchfield County [Conn.], is the place where the revision and editing happened. The inspiration comes from time I spent in New York and Paris. This book is more specifically about New York, and the apartment — the area — that [protagonist] Sloane Jacobsen lives in — in the book — is Alphabet City and that’s the place that I used to live and feel very, very attached to and nostalgic for because when I go back to New York it’s literally changing every single day. I lived in a pretty disgusting building with a lot of college students although I found myself as a career woman. The other piece of it is that I was working at that time at a really big branding agency and it was my experience in that branding agency that inspired the corporate environment at Mammoth — which is a company that doesn’t exist — but I was just really struck back then…they had this breakfast buffet, and because I was usually a freelancer it just seemed amazing to me that I was getting offered breakfast every day, and then there were snacks, and there was a happy hour. It took me not too long to realize it was because they never wanted you to leave the building, not ever, ever.”

HVS: You are ensconced in the very thing your protagonist fears: motherhood. How do you strike a balance in this fast-paced world that expects women to juggle myriad personal and professional responsibilities?

CM: “Well, I mean, my first answer is day care. I wouldn’t be able to accomplish anything without the quality day care that I’ve found. That’s my first, second and third answer: quality child care. Knowing that my daughter is in the hands of people that I really like and trust makes me have no guilt whatsoever about working during the day. And then, when she comes home, I try to be fully present. Now, it’s a little bit ironic — because I’m in pre-publication mode — it’s really hard for me to be present right now. I have to make more of a conscious effort right now, in this specific moment of my life, to literally put my phone away. Like I’ll put the phone upstairs and play with my daughter downstairs. The phone can’t be anywhere near me. Or I will take her to a park and leave my phone at home. Normally I have better balance than I do right now, but for instance since I’m going to be touring so much in June, I hope that once July comes I’ll keep her home with me one day a week and make that extra effort to just be there for her –without an agenda — but have fun and do nothing. Or just draw together. I want her to know she has my undivided attention.”

HVS: A reviewer of Touch said, “our modern world is at once hyper-connected and hyper-alienating” noting the extreme ends of the spectrum. When you disconnect, what are your favorite ways of connecting with the world around you?

CM: Right now a big thing for me is horseback riding, which was a passion of mine when I was a little girl but I stopped young, when I was ten. I started up again 30 years later. I just started riding again this year; that’s my number one way of disconnecting because when you are on a horse you have to be fully, fully present. Even the sound of a text message coming in could make your horse spook, so there is no multi-tasking whatsoever and I love that focus of attention. Other ways are just exercising, being outside and cooking. I love to cook. A great pleasure of mine is listening to the Savage Lovecast [with advice columnist Dan Savage] which is a call-in show about relationships, but there are really weird sex related questions. I like to cook and listen to that. And spending time with my family, real time.”

HVS: Novelist Anne Lamott encouraged aspiring writers with her advice to, “just take it bird by bird” in her 1995 compilation of instructions on writing and life. What pearls of wisdom do you offer to aspiring writers on the craft?

CM: “Join the [literary] community. A lot of writers, especially young writers, will get so caught up in the thing they are writing that they forget to connect with other writers. And I don’t just mean making friends with other writers, and talking about books with other writers, I mean subscribe to literary magazines, buy books, make sure you are saving up money and putting it into the economy of arts and literature. Go to some writing workshops. Be part of the conversation; don’t focus entirely on the thing you think you have to say. First of all, you are going to need a literary community if you do get to a place where you are able to publish; and even when you do get published, you are still going to need friends in the literary community because it is a very lonely line of work.”

Courtney Maum is the author of the novel, ‘I Am Having So Much Fun Here Without You’ and the chapbook, “Notes from Mexico.” Her short fiction, book reviews, and essays on the writing life have been widely published in outlets such as The New York Times, Tin House, Electric Literature, and Buzzfeed, and she has co-written films that have debuted at Sundance and won awards at Cannes. At various points in her life, she has been a trend forecaster, a fashion publicist, and a party promoter for Corona Extra. She currently works as a product namer for M*A*C cosmetics from her home in Litchfield County, Conn. For more information, please visit: www.courtneymaum.com.