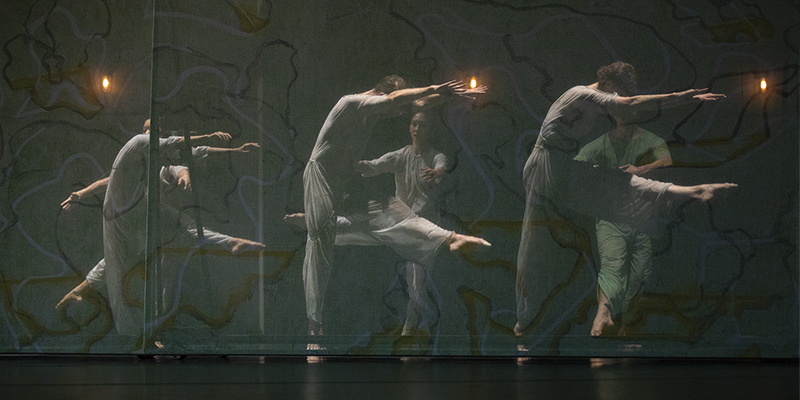 Annandale-on-Hudson — Rarely do dance, music, poetry and image come together as sublimely as they have in FOUR QUARTETS, which had its world premiere for three performances at the Richard B. Fisher Center for the Performing Arts July 6 through 8. Pam Tanowitz, fulfilling the modern tradition of choreographers Merce Cunningham and Trisha Brown, has created a major, transcendent work in perfect unison with T. S. Eliot’s masterpiece, “Four Quartets.”

Written between 1936 and 1942, Eliot’s poems, a series of four contemplations of time and space, borrowing from both Eastern and Western philosophies, are a perfect basis for Tanowitz’ s dance discipline, informed at times by stillness as much as kineticism. The harmony achieved in the 75 minute composition is so precise, there’s no sense of distance between the Eliot’s poetry and Tanowitz’s dance. Her company of nine, barefoot, attired in loose fitting, linen pajamas, embrace the stagespace, whether in solo, duet or ensemble forms, as an artist’s canvas: dance spills into the wings on occasion or moves around back part of the scenic installation. Tanowitz’s versatile vocabulary creates an ever-changing dynamic, but as the work progresses, ebbing transacts with flowing, and flowing with ebbing.n The effect is trance-like.

Narration by actor Kathleen Chalfant and original music by Finish composer Kaija Saariaho fit perfectly with the dance. Chalfant eschews actorly affect: her insightful, knowing reading seems to simply give voice to Eliot’s words, allowing his poetry to emerge in natural rhythm. Tanowitz’s dance doesn’t follow Chalfant, but Chalfant is aware, observing the dance at pivotal moments. She sits in a small area cordoned from the audience below the stage with the musical quartet, reading at a table with hardcover edition in hand. Saariaho’s music performed by The Knights quartet combines East and West. It doesn’t frame the dance: it creates a musical space of sounds that seems to moves in, through and around the dancers’ movements.

The scenic and lighting design by Clifton Taylor beautifully utilizes four paintings by Brice Marden that reference obliquely religious and spiritual sensibilities of Eliot’s work. The entire performance is mesmerizing but the dynamic last five minutes with the entire company is the most powerful. The most poignant, however, was when a soloist moved to the lip of extreme stage right just above where Ms. Chalfant was stationed and paused. The music went silent. Lighting cast a long shadow across the stage from the solitary dancer. Ms Chalfant looked away from the book, up at the dancer, returning the dancer’s gaze. In that moment, perfect stillness.