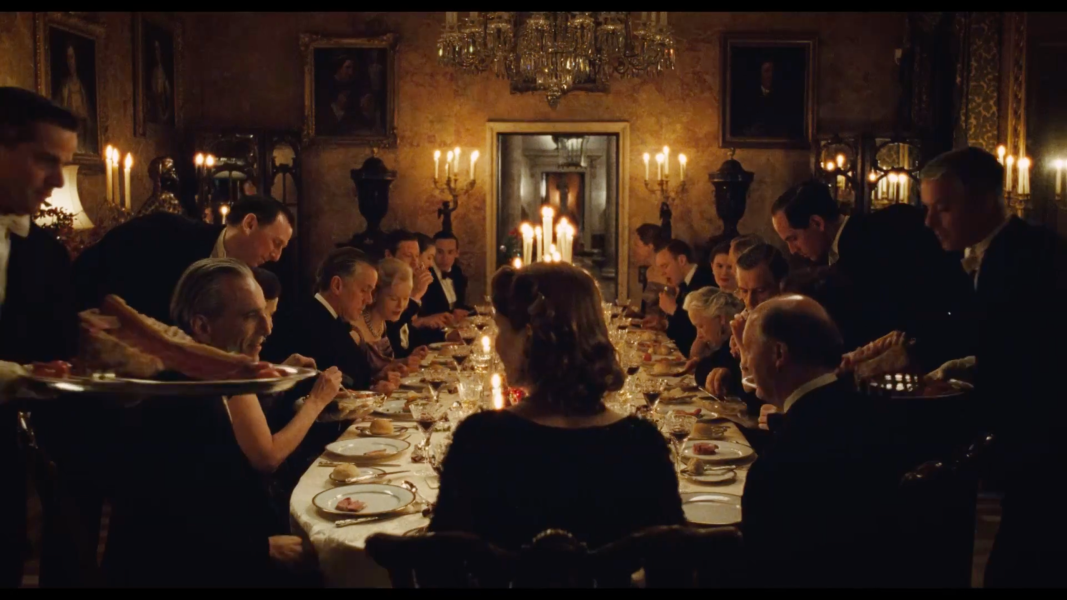 A scene from 'Phantom Thread' directed by Paul Thomas Anderson

Paul Thomas Anderson makes large ambitious films. Think of his exploration of Los Angeles subcultures like “Boogie Nights” (1997) and “Magnolia” (1999)­ – and the critically lauded historical epic “There Will Be Blood” (2007), a sprawling film about a larger-than-life, devious, destructive oil baron given a riveting performance by Daniel Day-Lewis. There is also “The Master” (2012), which apparently deals with a Scientology-like cult, but is less interested in the cult’s structure and dynamics than in the psychological and archetypal nature of its sometimes-mad characters. Anderson is not a realist interested in the daily, and reality is always heightened in his work.

His latest film, “Phantom Thread,” places his central character in London and Yorkshire in an indeterminate time (the 1950s?) rather than the U.S., so there is no attempt here, as in his earlier films, to explore aspects of American character and mythology. It centers on an elegant, meticulous, neurotic and celebrated couturier, Reynolds Woodcock (the great Daniel Day-Lewis in what he has declared is his last performance). Woodcock is a fastidious perfectionist running a fiefdom of women seamstresses who work diligently sewing his dresses. He initiates a relationship with much younger, seemingly placid, foreign-born waitress Alma (Vicky Krieps). When he takes her out for the first time, he does most of the talking, which sets the tone of a relationship where he plays Pygmalion, making her part of the fashion business. However, she remains somewhat elusive – we know nothing of her backstory (though we assume her origins are working-class); and she often offers only an enigmatic smile, though she speaks of giving every piece of herself to him.

Still, the relationship between the tightly wound, easily irritated, tyrannical artist/genius and the watchful, smart woman who works for him as an assistant and model doesn’t go smoothly. Alma gradually becomes resentful about submerging her life to him. But it turns out to be more complex than that.

Alma dislikes being invisible and wants to be at the center of Reynolds’ life, though, for him, the art comes first. And though he believes in the purity of his art, he still has to deal with the demands of his wealthy, often vulgar female patrons, whom he often detests. The film does not delve into the passion and process of his creation – it mainly affirms his persona as an idiosyncratic, obsessed, somewhat-grand artist.

In London, Alma lives with him and his controlling and hovering unmarried sister Cyril (a very precise performance without a false note from Lesley Manville), who has a special bond with her brother that totally supersedes his relationship with Alma. Cyril, with clipped speech, confidently runs the business side of their enterprise and both totally understands Reynolds and is emotionally stronger than he is. She even gets rid for Reynolds of the women he loses romantic interest in.

Alma’s anger doesn’t lead either to some feminist affirmation or abrupt departure from the townhouse but to a desire for revenge that resembles Joan Fontaine ostensibly poisoning her husband Cary Grant in Hitchcock’s romantic thriller “Suspicion.” “Phantom Thread” is a much quieter and more romantic film than is Anderson’s wont – violence and emotional fireworks usually play a significant role in his work. And Anderson himself shot “Phantom Thread” and did so with consummate fluidity, as the camera traveled up and down the winding stairs of the townhouse and centers on Reynolds’ elegant designs. While this is a formally beautiful film, there is an underside to the high style – though nothing that is over-the-top or violent. There is just Alma, after feeling totally dismissed by Reynolds, taking revenge by making him ill. He recovers and, strangely enough, the relationship is ultimately resurrected and turns into a romance because the fragile designer truly has an intense love for her that his neuroses prevent him from conveying and sustaining, or else he needs to be dependent on a woman who would mother him. (Alma does just that when he is ill). In fact, we learn earlier that he dreams of his mother, and she later appears as an apparition when he is ill.

The sequences depicting Alma’s attempt to make him ill jar one and feel contrived, for this is not a thriller but an extremely odd romance between people we don’t really like and whom we feel removed from. It’s possible to see the film as a perverse work that veers away from conventional realism with the victim collaborating with the victimizer – with both Reynolds and Alma acting both roles.

I always find Anderson of interest – never predictable, always suggestive – making us wrestle for the meaning of the film he creates. His work is always open to multiple interpretations, perhaps less a matter of calculated ambiguity than some unwillingness to construct a neat work where all loose ends are resolved. I much prefer Anderson’s less accessible, evocative films to tidier, more mechanical work, where the meaning is spelled out so the audience can easily understand and respond.