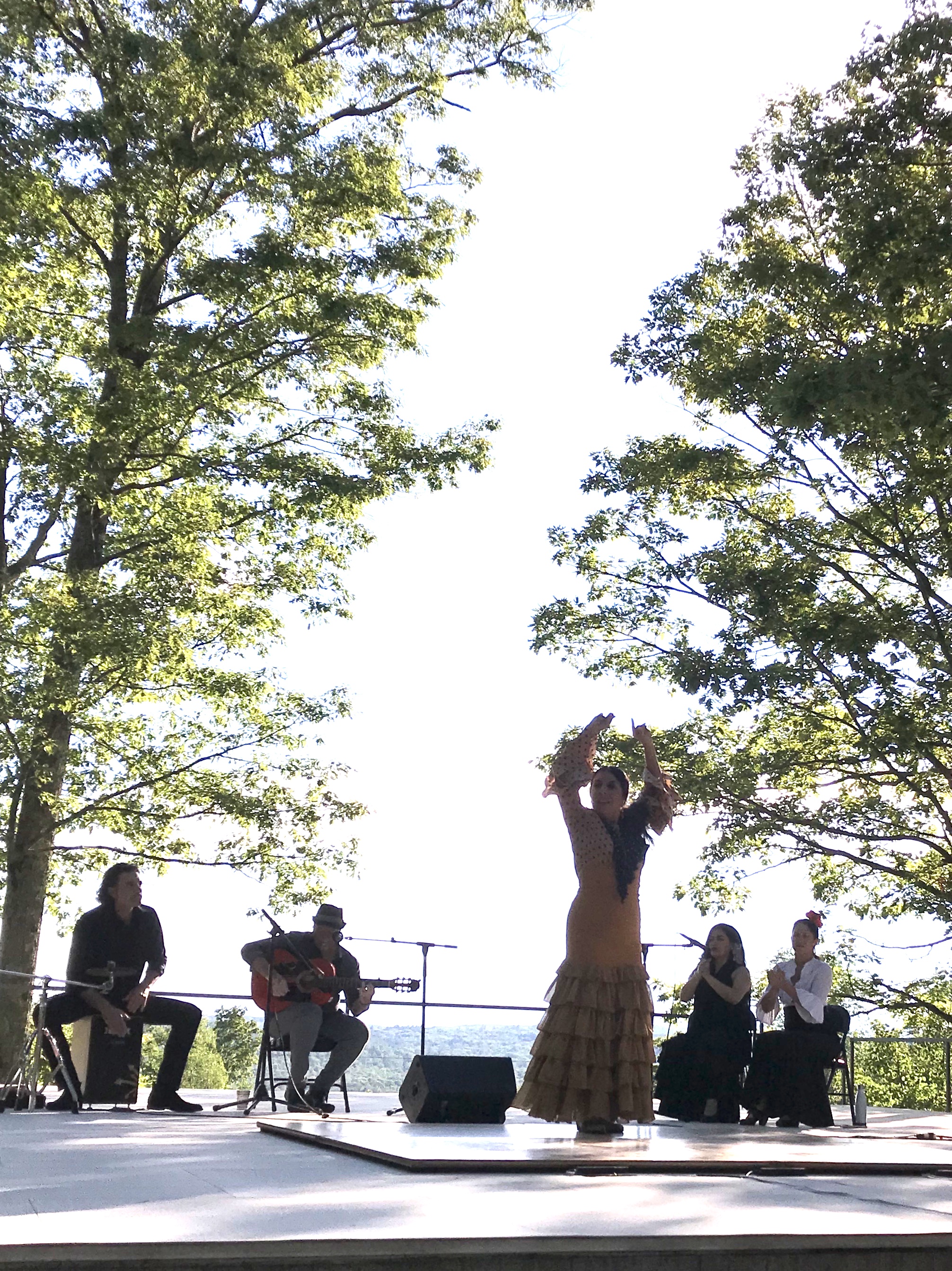 Becket — “This is the week of flamenco,” said Jacob’s Pillow Director Pamela Tatge when introducing Compañía Irene Rodríguez to a sold-out audience in the Ted Shawn Theater on Wednesday night.

Two years ago, Compañía Irene Rodríguez thrilled Pillow audiences at her debut performances at the Doris Duke Theater. Your reviewers were fortunate enough to have been there and reviewed those imaginative performances, which mixed flamenco improvisation and through-composed choreography, castanets clicking together.

Ms. Rodríguez has returned with her company for seven performances and a rich additional agenda, directing the Professional Advancement Program of Flamenco & Spanish Dance at the School at Jacob’s Pillow from June 24-July 7.

The week of daily Flamenco performances began with an unticketed, free event on the Pillow’s Inside/Out stage with a different company, Briseyda Zárate Flamenco, followed 45 minutes later in the Ted Shawn Theater. In sum, it was a sequence of stunning tableaux, with marvelous contrasts within and across the dances.

Accompanied by singer and guitarist Cristian Puig, and flamenco cajón percussionist Peter Bogdanos, Ms. Zárate and her musicians delivered the kind of raw, intense, passionate flamenco that grabs you in your belly and keeps you on the very edge of your seat, which in this case, quite appropriately, were made of sawn wood benches set facing an open stage with the Berkshire Forest stretching to the horizon.

Flamenco can be both a choreographed and an improvised art form. In this strong performance, Zárate, Puig and Bogdanos improvised within the structured framework of traditional flamenco, adorned by brilliant jazz licks on the guitar and drum. As Ms. Zárate explained at a talk session after the performance, “You know where you’re going, but not how you’re going to get there.”

The risk-taking and emotional depth of cantewas prominent all through. This passionate song styling is expressed on the spot, in Spanish, with intriguing and often mysterious gypsy, and Sephardic melodic fragments and lines. Puig strummed the guitar with his fingers, patted it with his palms, and struck its body with his fingertips and knuckles. In response, Bogdanos coaxed layers of swinging rhythms from his cajón, and two side dancers, each of whom gave brief improvised solos in the final number, clapped on the principal impulses and accents.  The movement and music seemed viscerally to affect the remarkably diverse audience, which included some 15 young participants in Tango Week and numerous younger, spellbound children. Their level of excitement was audible all through with shouts of “ole,” cheers, and a continuous smattering of clapping in time and in gratification.

In the 20 minute Q and A that followed, Ms. Zárate, the daughter of Mexican immigrant farmers, described how she fell in love with flamenco when she was an undergraduate at U.C.L.A. After graduating and a brief teaching career, she went to Spain for 7 years to engage deeply in the dance.

Puig and Bogdanos described their own musical paths, emphasizing the influences of jazz in their thinking and styles. Puig, an instrumental virtuoso as well as a magnificent singer, replied in response to a question about whether he admired Paco de Lucia, “He is my god, followed by John McLaughlin and Al DiMeola.”

It happens, gentle reader that these three gods made a live recording together that is treasured by fans of jazz guitar. The strains and rhythmic layers of flamenco shine through in the astounding exchanges that follow.

After delicious sandwiches at the Jacob’s Pillow Café, we proceeded to the Ted Shawn Theater to witness another stage of flamenco, through the artistry of Irene Rodríguez and her company, a major voice in the contemporary Cuban dance community.\

Compañía Irene Rodríguez is known for its integration of Flamenco with Spanish dance, Afro-Cuban rhythms, contemporary movement, and modern themes. This was especially borne out with the presentation of three premieres, stretching the boundaries of the genre with fresh and inventive surprises. And how different it was. Along with her company of six dancers, musicians included the extraordinary Cantaor, Andrés Correa, composer Reynier Liorente on guitar, Alejandro Triffin and Josée Rondón on percussion, and Joel Ramirez on saxophone.

The program opened with a reprise of El Mito, comprised entirely of female feet shining in black shoes under a slightly raised curtain on the darkened stage, clicking, tapping, and coalescing into riffs and snippets of flamenco rhythm. Enter a pair of feet in white shoes, a bit hesitant, with percussive footwork and gesture unfolding into an imagined narrative of differentness, confusion and eventual acceptance.

El Mito was followed by a cornucopia of short dances new to these reviewers, including three Pillow commissioned works. La Pena Negra, based on poetry of Garcia Lorca, showcases Ms. Rodriguez in a spectacular black gown (designed by Ms. Rodriguez and Jesús Villalonga) with what looked like a 10-foot ruffled train that frames her moves and integrates into the dance itself.

Encierro, in its American Debut, projects a stylized head of a bull in red on the rear of the stage, while dancers clad sleekly in black depict a group of bulls revolving around a satin-caped matador who ultimately dies on the horns of one of the bulls.

Also a Pillow commission and a world premiere, El Grito, inspired by Edvard Munch’s iconic painting, The Scream. Before Munch’s fiery red sky projected behind them, the entire ensemble dances into a dystopian past or future, ending with Ms. Rodriguez folding into the scream, mouth distorted into an elongated “o”.

The final dance featured Ms. Rodriquez in a simple red dress in a kind of duet with a fringed Spanish shawl. Sinewy, and spare, Ms. Rodriquez’s dropped and retrieved, draped and abandoned her shawl in a muscular, affecting dance that displayed her supreme artistry and control.

In contrast with the gritty traditionalism of Briseyda Zárate, Compañía Irene Rodríguez stretched Flamenco from its roots into the diaspora and into the future, with imaginative, theatrical performances, mixing flamenco style with through-composed choreography, saxophone extending the musical lineup, castanets clicking together, fans opening and closing with precision, projected images, smoke, dazzling costumes and star turns for Ms. Rodriguez, an extraordinary dancer who does magic on her heels, en pointe, and in jaw-dropping inventions. These reviewers were impressed and sometimes astounded, but missed the raw integrity and risk of Briseyda Zárate Flamenco on the inside/out stage.

That changed at the end of the program, when, with the Ted Shawn audience on its feet and cheering, Ms. Rodriguez brought her company back for encore after encore, music lifting into the rafters and dancers taking their own turns of passionate improvisation, leaving the audience with both the roots and the future of flamenco.