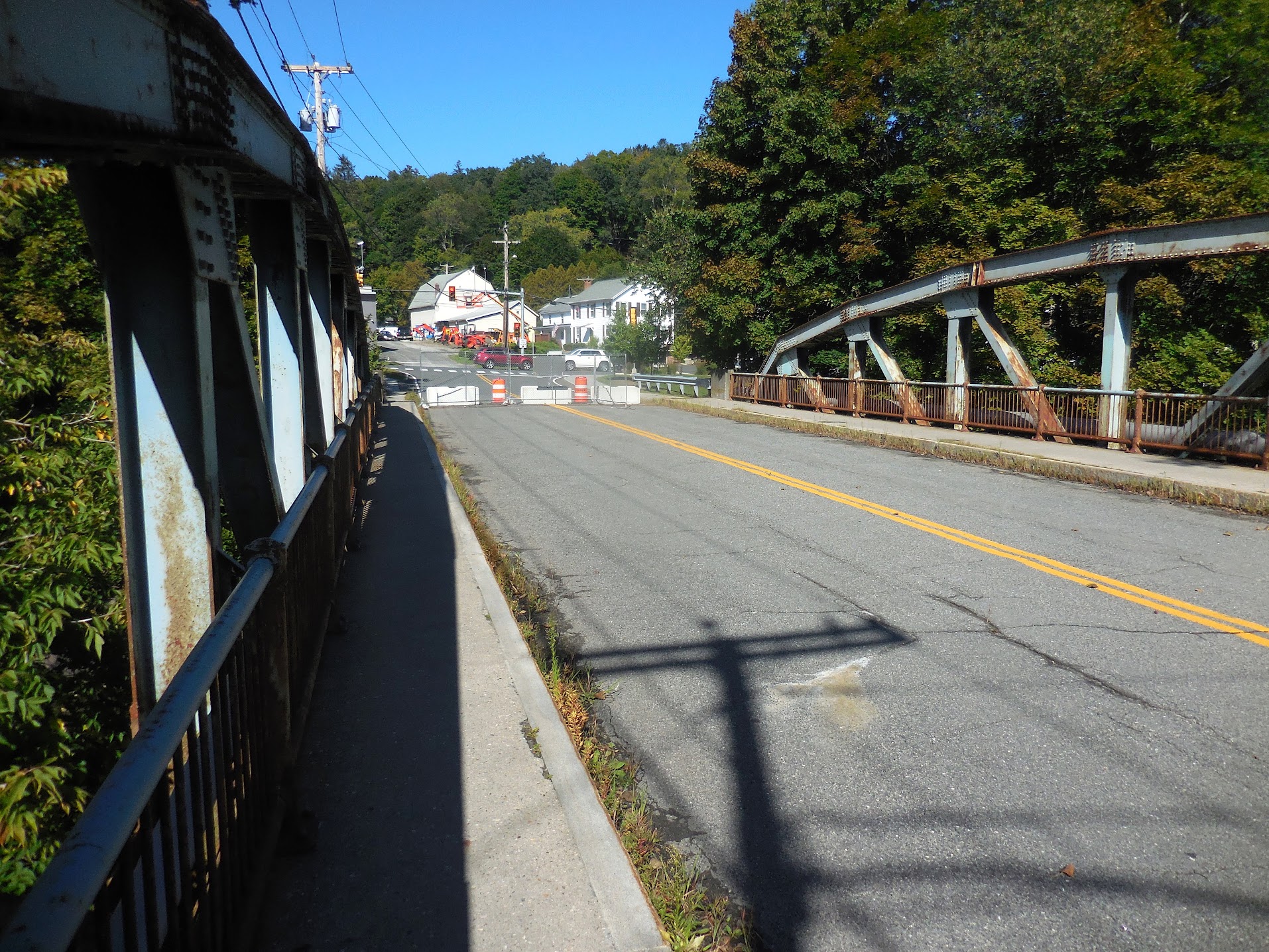 The Cottage Street bridge has been quiet since December 2018 when MassDOT ordered it closed for structural deficiencies. Photo: Terry Cowgill

Great Barrington — Despite pleas for a temporary fix to a closed town-owned bridge, officials say a repair could endanger millions in state funds secured by the town to replace the Cottage Street bridge five years from now.

At a special neighborhood meeting Monday night at the Claire Teague Senior Center, members of the selectboard heard from several nearby residents who wondered aloud why the town did not simply execute a temporary repair of the Cottage Street bridge, the closing of whichto vehicular traffic last December has inconvenienced residents of the Cottage Street, Gilmore Avenue and East Street neighborhoods.

Martha Klay, who lives in the affected neighborhood, noted the large amount of local tax revenue brought in by Theory Wellness in its first six months of operation this year (she guessed half a million but it’s actually just shy of $1 million) and suggested it be put to good use.

“We think that half a million dollars should comfortably cover the repairs of the Cottage Street bridge,” Klay said.

See video below of the selectboard’s special neighborhood meeting about the Cottage Street bridge closure:

But town manager Mark Pruhenski told the audience that such a move might force the town alone to pay the costs of replacement. Pruhenski said the best estimates for the repair he has heard from town DPW chief Sean Van Deusen are in the range of $500,000 to $750,000 — all of which would be borne by the town.

In March 2018, the town received a grant of roughly $5 million from the State Transportation Improvement Program to replace the bridge, but the money will not be released until 2023.

Only seven months later, the state Department of Transportation told the town the bridge had to be closed to vehicular traffic. MassDOT gave the bridge its lowest rating and noted “deteriorated stringer webs at both abutments” as the primary reason for the closing.

“But the risk in repairs, at this point, is that if you repair the bridge, it may fall off the TIP list,” Pruhenski said.

In other words, state officials might look at the Cottage Street bridge and say to the town, “Oh, you fixed it, so you don’t need our money anymore.” Meanwhile the bridge remains open to pedestrian traffic. Vehicular traffic, however, is blocked by stone barriers and chain-link fences.

The Cottage Street bridge is town-owned. It has a 142-foot span, was built in the 1930s, rebuilt in 1961 and, as mentioned earlier, was closed 10 months ago by MassDOT. Click here to read the June 2018 MassDOT report advising that the bridge be closed to vehicular traffic.

Gilmore Avenue resident Bernie Drew, who has lived with his wife and family on that street since 1978, brought up a related subject. Drew, an Edge contributor, also authored a story about the Cottage Street bridge shortly after its closing.

“Yes, it is an inconvenience to the neighborhood,” Drew said of the bridge closing, “but beyond that, there is a much broader issue.”

Drew noted that the town of Great Barrington has six bridges over the Housatonic River. Two (the Bridge Street bridge and Park Street bridge in Housatonic) have recently been repaired. Two others (at Cottage and Division streets) are closed. Vehicles looking to drive over those spans must look elsewhere.

“That pushes an awful lot of activity onto the Brown Bridge,” Drew said. “Each day you drive by, you wonder how many more spindles are going to fall off the railing.”

Drew wondered aloud what would happen if, in a few months, MassDOT ordered the Brown Bridge closed as well. The Brown Bridge, so named for its color, crosses the Housatonic at the intersection of routes 7, 23 and 41, where Domaney’s Liquors is.

Drew envisioned a nightmare scenario in which the Brown Bridge is closed by the state, pushing its traffic onto East Street, a narrow residential thoroughfare with a turn to and from Bridge Street that is exceedingly difficult for large trucks to navigate. And, of course, Cottage Street would not be available as an alternative.

As it stands today, at peak hours, traffic backs up from the Brown Bridge beyond Belcher Square to the south and well into Main Street to the north — a phenomenon Drew attributed to the extra traffic light installed at Main and Elm streets during the Main Street reconstruction project, which concluded in 2016.

“So I’m standing here to urge you to really consider repairing the Cottage Street bridge as quickly as possible in anticipation of Brown Bridge failing,” Drew said.

Selectboard chair Steve Bannon was quick to point out that the Brown Bridge is state-owned, in contrast to the one at Cottage Street. Still, MassDOT has told Pruhenski that repairs to the Brown Bridge will begin this coming spring.

“We have been notified by MassDOT that they will be doing steel work there.” Pruhenski said. “Part of the repairs will include a new paint job, so we’re in the process of choosing a new color.” This led Selectman Ed Abrahams to wonder if there was any other color to paint a span called the “Brown Bridge.”

While he had the selectboard’s ear, Drew took the opportunity to complain about the sidewalks — if you want to call them that — on Gilmore Avenue. When Drew and his wife, Donna, first moved to the street more than 40 years ago, the Dewey School was still open (it is now a district courthouse) so there were lots of children using the sidewalks.

But he can’t recall any work being done to those sidewalks since then. They have become so narrow and overrun by sod that, in spots, they are about the width of “a cow lane,” Drew explained.

And The Edge confirmed another of Drew’s observations: There are a few places on the Gilmore Avenue sidewalks where tree trunks have grown so large that they have gone beyond lifting the concrete slabs and are actually blocking the sidewalk, forcing pedestrians temporarily out into the street.

Pruhenski said he and Van Deusen have also noticed the problems with the Gilmore Avenue sidewalks and agreed to make them a priority.

In addition, see the video below of a similar community discussion on Monday concerning what to do with a town-owned home at 40 Grove St. The town foreclosed on the property more than 10 years ago for nonpayment of taxes and is seeking input from residents of Great Barrington and neighborhood about what they’d like to see happen to the property.