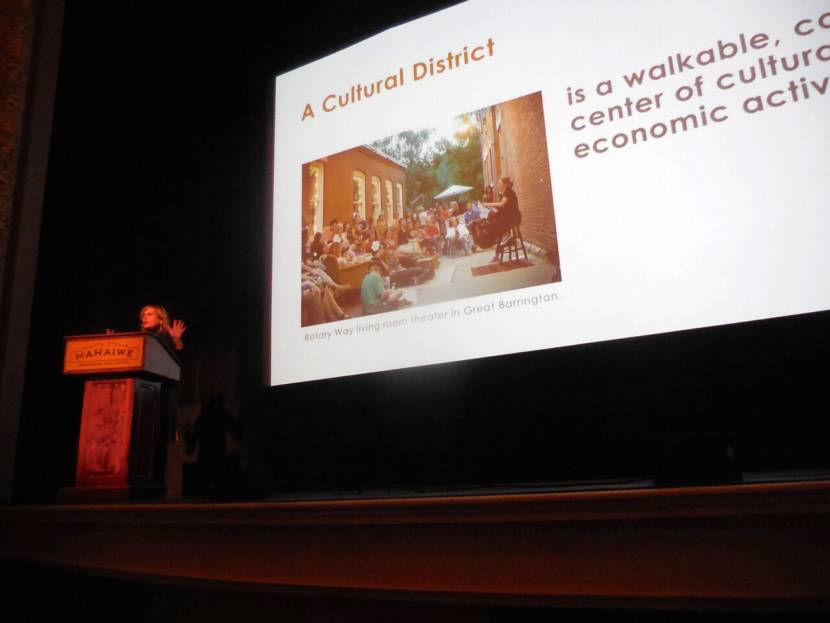 Great Barrington — Public officials and stakeholders were all smiles as a modest crowd gathered in the Mahaiwe Performing Arts Center Monday afternoon (Oct. 22) to celebrate the new state designation of downtown Great Barrington as a cultural district.

Anita Walker, the executive director of the Massachusetts Cultural Council, was on hand to make the pronouncement that the town would join 44 other municipalities in the state that have such districts.

She said cultural districts are “economic generators … that attract visitors and money to the community.” But, referring to the PowerPoint presentation she had just flipped through, she added, “Look at the people on those slides. What’s best is they are full of people, smiling and having fun.”

Sen. Adam Hinds, D-Pittsfield, is Senate chairman of the Joint Committee on Tourism, Arts and Cultural Development. Hinds faces no opposition in the Nov. 6 election and will be elected to a second term.

“I actually asked to chair that [panel] because it’s so critical — the arts and tourism and culture for the county,” Hinds told the 70 or so people in attendance. “Not only is it the third largest industry [in the state] contributing to our economy, but it’s simply who we are: It’s why people move here, it’s why people stay here, it’s why people return here. It’s a part of how we express ourselves when we’re frustrated with politics and politicians.”

Rep. William “Smitty” Pignatelli, D-Lenox, said, when he was growing up in Lenox, he and his friends rarely visited Great Barrington, except to play ball on the Bridge Street field or the watch movies at the Mahaiwe, which was then a drafty, rundown cinema.

As Pignatelli sees it, downtown Great Barrington’s renaissance began with the opening of the Triplex Cinema in 1995 on what used to be the Taconic Lumber yard, which had burned down in 1987.

“Then came the Mahaiwe and we saw downtown start to transform itself,” Pignatelli recalled, referring to the Mahaiwe’s $9 million restoration. “I don’t think there’s an empty storefront in downtown Great Barrington. We’re seeing an eclectic mix of restaurants, shops and businesses and now we have Saint James Place.“

It was a reference a former the former church that has been lovingly restored and converted by Fred and Sally Harris into a cultural and civic center.

Selectman Ed Abrahams said he sees the cultural district as an economic driver for the town.

The local cultural district steering committee will guide the implementation of the district. This committee includes the town manager and representatives from the town cultural council and the Great Barrington Libraries, which feature numerous cultural events.

The goals of a cultural district are clear. It is largely a marketing tool, as explained in a statement from the town announcing the initiative: “In seeking a cultural district of its own, Great Barrington hopes to attract more artists and cultural enterprises, encourage business and job development, and foster a robust local arts and culture scene.”

With the addition of Great Barrington, there are currently 45 districts in the state. Click here to see the list. With its successful application, Great Barrington is the first in South County and the fourth community in Berkshire County to achieve the distinction. The other three are in Pittsfield, Williamstown and North Adams.

When the idea of a cultural council was first floated early this year, town officials emphasized that applying for the designation will cost the town nothing and that anyone whose property is included in a cultural district will face no additional taxes or limitations on the use of that property.

The district borders are roughly Main Street from Taconic Avenue to Cottage Street, with the district extending about a block on side streets on both sides of Main Street.