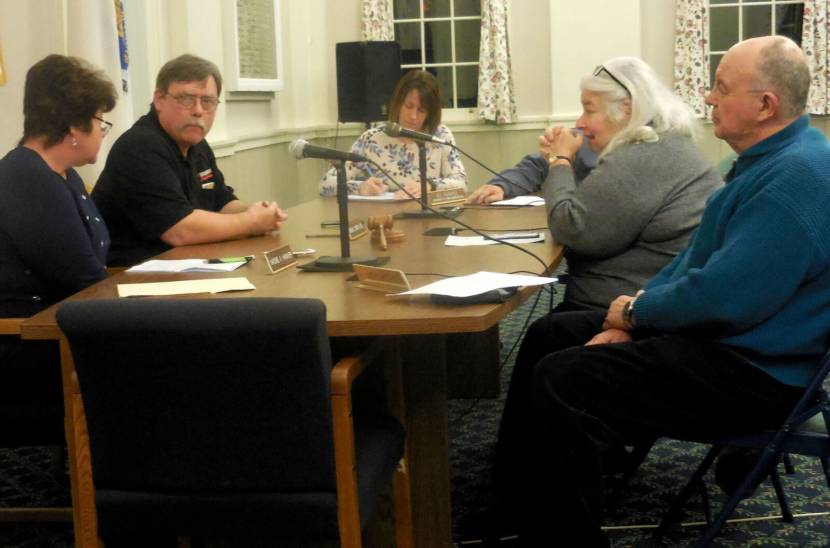 Tension filled the room as the board of selectmen and the Sheffield members of the Southern Berkshire Regional School Committee debated how to fill an open seat on the committee Monday in town hall. From left: Selectmen Nadine Hawver and David Smith; board secretary Jill Hughes; and school committee members Art Batacchi (obscured), Bonnie Silvers and Dennis Sears. Photo: Terry Cowgill

Sheffield — The old adage that elections have consequences has taken on a whole new meaning in Sheffield.

The November election for seats on the Southern Berkshire Regional School Committee has sparked recriminations, a barrage of finger-pointing and heated rhetoric. One candidate who was — at least for the time being — denied a seat, has said a letter of complaint to the state attorney general’s office about an open meeting law violation is being sent.

The board of selectmen has even been dragged into the fight since the board has some authority to fill a seat that is now vacant because, on Monday, Tim Schroepfer pulled himself out of contention in frustration over a situation that acting school committee chair Bonnie Silvers has acknowledged is “a mess.”

A panel known as the “appointive body” met Monday night to discuss how to fill an open seat on the school committee. That body consists of the three remaining Sheffield members of the regional school committee and the three-member board of selectmen.

That meeting followed a contentious and chaotic school committee meeting last Thursday, Nov. 29, in which a Sheffield member, Dennis Sears, angrily walked out, announcing he would resign in protest over a settlement with the town of Egremont. That night, the board also committed a flagrant violation of the state’s open meeting law by voting to elect its officers by secret ballot. The following day, and evidently unrelated, a bomb threat prompted the evacuation of the Southern Berkshire campus. Sears has since reconsidered his vow to resign.

“Dennis, I was really disappointed in your behavior,” Nadine Hawver, a member of the board of selectmen, said. “You and I don’t always agree on things, but I always thought you had the integrity to handle yourself maturely—and to pick up your toys and leave the game just broke my heart.”

See video below of Monday night’s meeting of the Sheffield Board of Selectmen and the Sheffield members of the Southern Berkshire Regional School Committee:

At issue is the result of the Nov. 6 elections. Silvers and Sears, both of Sheffield, were re-elected after a spirited race against two younger challengers with children in the district. For a variety of technical reasons, four Sheffield candidates were on the ballot for three seats. But voters were instructed to “vote for not more than two,” and those two with the most support—Sears and Silvers—were automatically re-elected.

But the third seat is more complicated. Challengers Jonathan Bruno and Schroepfer were also running, with Bruno getting more votes than Schroepfer but fewer than either Sears or Silvers. Schroepfer was an incumbent, but only because he was appointed to fill the unexpired term of Bob Law, who died in April. Schroepfer, Hawver said, was only supposed to serve temporarily until the beginning of November.

“Given the clear confusion about the election and the district’s failure to place the two-year position on the ballot, there were only three legitimate Sheffield people sitting at that table,” Hawver said of the Nov. 29 school committee meeting during which Schroepfer was appointed vice-chair. “And I do have a copy of his appointment letter, which took him through the November election.”

But Silvers has said she was informed by the district’s lawyers that Schroepfer’s appointment would be valid until such time as a new appointment could be made.

Art Batacchi, also of Sheffield, was appointed chairman Nov. 29. But since the appointments were done in violation of the open meeting law, new elections for school committee officers will take place this Thursday, Dec. 6, when the committee meets again to vote publicly on the officers and to re-ratify the actions taken after those officers were appointed illegally.

Also on the agenda for Thursday’s meeting is an executive session to discuss a district employee “based upon complaints brought against District administrators and staff in a survey of former employees provided to the Committee by a resident.” In addition, there will be discussions of two cases of “imminently likely” litigation, one of which involves the South Egremont School. Yes, it’s been that kind of year so far.

In an interview, Schroepfer said he had told committee members of his decision on Monday but was caught off-guard by the actions of Silvers, Sears and Batacchi.

“It was a de facto resignation,” Schroepfer said Tuesday. “I assumed they would appoint Jon. They did not, so I sent a letter of resignation today to make it official.”

Schroepfer also said he turned in a copy of his letter to the school district prior to assuming the duties of the position. He agreed with Silvers that the district’s attorneys indicated that his appointment “was to stand until a new appointment body could be formed.”

“I never at any time hid or obfuscated the contents of the letter,” Schroepfer said. “I asked numerous times about my status, post-election, and was assured of the legality and legitimacy of serving until such time as a new appointing authority could be formed. I was told by our chair that our legal counsel concurred.”

Schroepfer also issued a statement concerning his resignation: “After having served six months on the Southern Berkshire Regional School Committee, I decided that the time I was spending in committee and subcommittee meetings would be better spent at home with my family. I apologize to anyone I may have let down.”

Back in Sheffield Town Hall Monday night, the meeting of the appointive body was supposed to include interviews with the two prospective school committee members, but, Hawver said, since there was only one left, it made sense to simply appoint Bruno. But Sears and Silvers thought otherwise.

Sears said, since hearing about Schroepfer’s withdrawal from consideration earlier in the day, he had “already gotten two calls from people including former school committee members” expressing interest.

Selectman David Smith said he thought the intent of the voters was clear. Bruno had received the third-highest number of votes and so he should be appointed.

“I believe the gentleman got the highest number of votes whether he’s qualified, not qualified,” Smith said of Bruno. “I don’t even know the man. I just know that the voters voted for this gentleman and I respect that.”

Hawver said she met with Bruno last week and had “an extensive conversation.”

“I feel he has the qualifications to serve on the school committee and serve us well,” Hawver said.

Bruno is a teacher and administrator who has almost completed a doctorate in curriculum and instruction leadership at Northeastern University. He currently teaches special education at Housatonic Valley Regional High School, which is part of the Region One School District in Falls Village, Connecticut. He also has budgeting experience in previous positions he held in the Boston area.

Bruno’s candidacy, and those of the other younger candidates, was widely viewed as a generational challenge to the older-guard school committee members such as Sears, Silvers and Carl Stewart of Alford, who was soundly defeated by district parent Jeff Blaugrund.

Smith finally called for a vote but he knew he and Hawver were outnumbered. The selectmen were short-handed because the third, Rene Wood, was absent. Wood had recused herself from the matter because she is married to Sears. In addition, Wood had already announced on an Edge comment thread that she had voted for Sears and Silvers. After the vote to appoint Bruno failed by a margin of 3–2, it was agreed that the open Sheffield seat on the school committee would be publicized and interviews with the applicants would be scheduled as soon as possible.

Bruno was sitting in the selectmen’s meeting room during the discussion and asked if he could speak. He said he a letter of complaint had already been drafted to the state attorney general’s office concerning the now-famous “secret ballot” vote last week. In addition, Bruno suggested there are likely other violations around email correspondence among school committee members in advance of that evening’s meeting.

“I just wonder what it is that this school committee has against me. I’m probably the most highly qualified candidate that I’ve seen,” Bruno said, looking almost as uncomfortable as Sears and Silvers. “From my brief reading of the history, I’m not sure what they have against a teacher being on the board.”

James Thieriot, a parent from Monterey, stood and scolded Sears and Silvers: “I voted for Mr. Bruno. I just wanted to say, ‘shame on you guys.’ Bonnie, I thought you had more integrity than this … It’s over with. He got the top votes.”

“It has nothing to do with voting,” Silvers said. “It’s an appointment and we will be interviewing candidates. That’s what this is supposed to be.”

Jared Kelly, a parent from Egremont—where Silvers, Sears and Stewart are not exactly popular because of their position on the community school there—was also highly critical of the trio.

“Jon ran on a change ticket, along with people like Jeff Blaugrund and Ken Knox, seeking to bring more openness and engagement to the school committee,” Kelly told The Edge. “Bonnie and Dennis seem to have viewed such candidates as a threat to their status quo.”

Kelly, a business lawyer and litigator, questioned the legality of refusing to interview or to appoint Bruno when he was the sole applicant. Not appointing Bruno, Kelly said, when “he was the third-highest vote getter, only further undermines the democratic process.”

“And the fact that the school committee failed (inadvertently or otherwise) to get the third vacancy on the ballot makes the whole thing smell worse,” Kelly added. “The whole thing is undemocratic and unethical.”

Longtime Egremont resident Susan Bachelder told The Edge she thought the school committee’s refusal to appoint the runner-up to the open seat amounted to “voter suppression.”

“Jon Bruno ran for a seat on the school committee; his name was on the Nov. 6 state ballot,” Bachelder said. “He placed Number Three in the Sheffield vote and received hundreds of votes from across the district. Logic would tell you Bruno should have a chair at the table. Shame on Sheffield.”

Thieriot later told The Edge he thought the Sheffield residents on the school committee “are committed to disrespecting the voters choices.”

“They voted against the Sheffield Board of Selectmen and the voters of Sheffield who gave Mr. Bruno third place in a four-way race for two seats,” Thieriot said. “The third seat, vacant due to missed filing by the district, should be Mr. Bruno’s.”