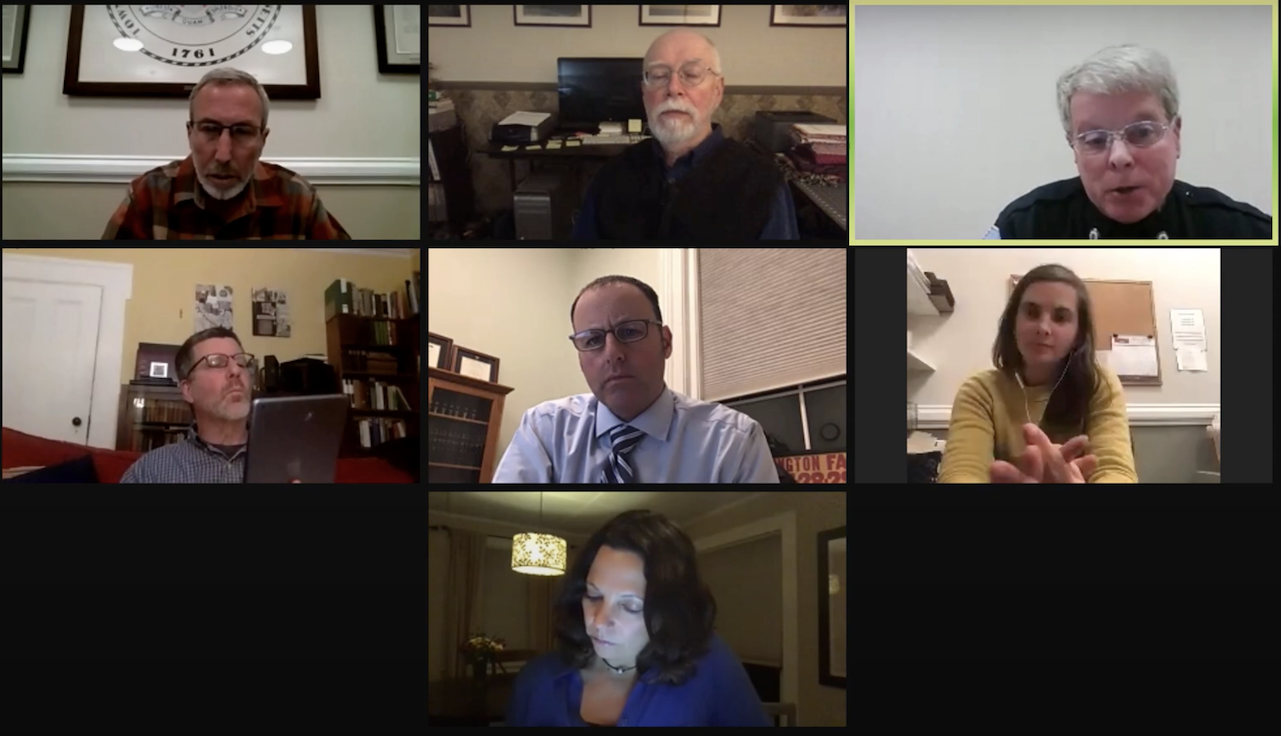 Great Barrington police Chief Bill Walsh, top right, explains to the selectboard at a Nov. 23 Zoom meeting how he and his team have 'reimagined' the department. Screengrab: Terry Cowgill via Zoom

Great Barrington — Like most states across the nation, Massachusetts is grappling with the best way to reform its police procedures.

The issue has taken on increased urgency in the wake of several police-involved deaths of persons of color, most notably the killing of African American George Floyd by a white police officer in Minneapolis earlier this year and the ensuing civil unrest nationwide.

To that end, Great Barrington police Chief Bill Walsh presented to the selectboard on Nov. 23 a blueprint for “reimagining” his force. The plan, some of which has already been accomplished, includes recommendations from the Report on Police Reform and Racial Justice, a review issued by the U.S. Conference of Mayors in August 2020.

Click here to view Walsh’s report to the board. Walsh explained that much of his plan has been implemented. Some of the policies were included because he and other police chiefs expect them to be in the police reform bills currently pending in the state legislature in Boston. There are two versions: One in the House of Representatives and another in the Senate. The Senate version passed in July.

The House version, which would create a new certification system for police officers, ban chokeholds and curb the use of no-knock warrants, passed a few days later, over the objections of the ACLU. The competing versions must be reconciled in conference and then sent to Gov. Charlie Baker for his signature.

“The goal tonight is to show you and everybody our first attempt at police reimaginination in our department,” Walsh said. “I stress that it’s not 100 percent [complete] but we think what we’re going to show you is that we’re off to a good start and we want to share some of that, as obviously these issues have been raging across the country for quite some time now.”

See video below of Great Barrington police Chief Bill Walsh explaining his efforts to improve his department’s policies and procedures. Fast forward to 10:45 for the presentation, which includes questions from the board:

In crafting his report, Walsh used information and recommendations from both pieces of legislation as well as the report from the Conference of Mayors. Walsh said the topics he addressed are in both versions of the bills.

One of the recommendations in the Conference of Mayors’ report emphasized police department transparency. Walsh insisted he has been out front on this issue, posting 27 of the department’s policies and procedures on the Great Barrington Police Department website. Some have not been made public because they are “top secret,” Walsh said.

“Rather than wait … for the governor to come out and tell us ‘Here’s what you have to do,’ we want to continue to be ahead of things here in Great Barrington and have a lot of these issues already completed,” said Walsh, who will be retiring on Dec. 24 after 40 years on the force, the last 37 as chief. “We can always go back and tweak it or revise it.”

Walsh said the mission is to “redefine the police role, adopting a co-responder model.” The department appears to be well on its way to accomplishing that feat, having established a partnership with the Brien Center for Mental Health and Substance Abuse Services to make a mental health clinician available at the police station two days each week. While on duty with the police, the clinician will serve as a co-responder to calls in which an individual displays signs that s/he is affected by a mental illness.

The use of force became a topic of discussion nationwide in the wake of several police-involved deaths as well as the 2012 fatal shooting of Black teenager Trevon Martin in Florida by a civilian neighborhood watch captain.

The Great Barrington policy on the use of force, including Taser deployment, has been recently revised and distributed to all officers. Then there is also the matter of what is known in law enforcement circles as the “duty to intervene” when an officer is using excessive force or otherwise abusing his authority. During the Floyd killing, several officers stood by as Officer Derek Chauvin knelt on Floyd’s neck for nearly nine minutes.

“It’s a good idea,” Walsh said of the duty to intervene. “It’s going to be in the new law so we put it right in our policy. We’ve given our officers two classes on that. This requires them to report to supervisors and make out reports. It’s not something that can be swept under the carpet, which is a good thing.”

Also, the department’s agenda is rendering aid after the use of force. As Walsh explained it:

“The idea is that if you use force, you can’t just stand around and not give them medical aid or attention. Our policy says you’re duty-bound to give aid after you use force. It’s not just a weapon. It’s mace, it’s taser, anything … you have to render first aid to that subject.”

The Great Barrington policy also bans chokeholds except in situations where deadly force is allowed by law. The practice is prohibited except in a situation in which an officer has lost his baton or his mace, and chokehold is his only resource for restraining a suspect.

“If it’s going to save an officer’s life and that is his last option,” Walsh explained. “But for all practical purposes, we do ban chokeholds.” The same goes for shooting from a vehicle. An officer is allowed to do so only if all other options have been exhausted.

There are also policies on impartial policing, hiring, promotion and retention. In addition, Walsh said both police reform bills in the state legislature will require municipal departments to become accredited. Consider it done. Great Barrington was the first — and remains the only — department in Berkshire County to gain accreditation through the Massachusetts Police Accreditation Commission.

There are also new policies set in place as a result of the passage of the so-called Trust Policy, which passed by an overwhelming margin at the annual town meeting in May 2017 but had been months in the making.

At that time, Great Barrington joined North Adams and Pittsfield in adopting the policy, which designated the town “a safe and inclusive community” that will not enforce federal immigration law or “aid in the detention, transfer, transport or deportation of residents for civil immigration purposes.”

Selectboard member Leigh Davis wanted to know about the presence of federal officials from Immigration and Customs Enforcement who took a local worker into custody in front of the popular Fuel coffee shop on Main Street in January 2018.

Great Barrington police did not participate in the arrest but, when asked by ICE, a Great Barrington officer did retrieve the detainee’s medication from his apartment after the detention had been executed. Great Barrington resident John Breasted later alleged that low-level cooperation with ICE ran afoul of the town’s Trust Policy, an accusation that Walsh heatedly denied.

See video below from January 2019 of an exchange between Walsh and town resident John Breasted concerning the cooperation of Great Barrington Police with ICE:

“I was just wondering if there is any way to address some of the fear that’s in the immigrant community regarding the presence of ICE agents in Great Barrington and if there’s a way to dispel some of the rumors and how we’re going to move ahead with that.”

Walsh said whenever ICE agents are in town, he reports it to the town manager.

“They have been around and have been in some establishments recently, but that had totally nothing to do with us,” Walsh explained. “They come in, they realize we’re a town that’s hands-off with them. They don’t bother us, but they’ve been around recently — in a couple of places, restaurants.”

“But unfortunately, to answer your question, we can’t do anything about that. They’re unto themselves. The outreach to the immigrant community that Great Barrington is hands-off and we are a safe entity.”