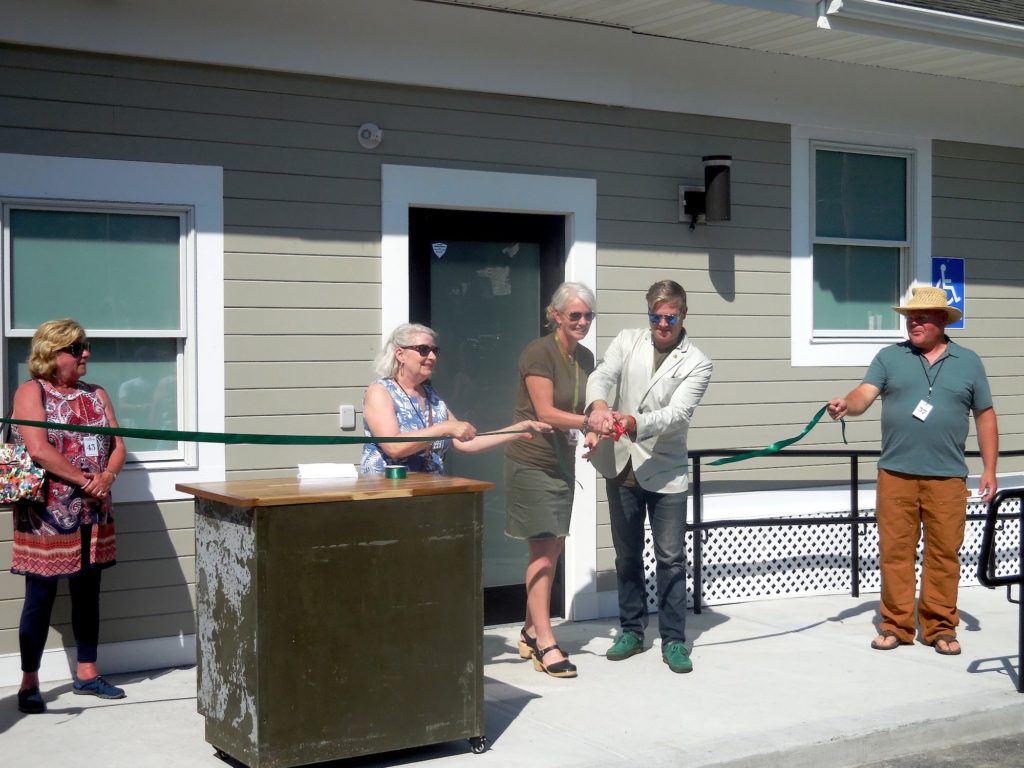 Of antiques and ‘journeys’: New cannabis shop opens its doors in Lee

Canna Provisions joins Great Barrington’s Theory Wellness, which opened its doors as Berkshire County’s first medical marijuana dispensary in 2017 and started selling recreational marijuana at the beginning of this year. In addition, Silver Therapeutics in Williamstown, and Berkshire Roots and Temescal Wellness, both in Pittsfield, have opened their doors recently.

For cannabis buyers accustomed to Theory Wellness, Canna customers will have a very different experience. Both have extensive security regimens through which customers must pass before gaining admittance, but the similarities pretty much end right there. 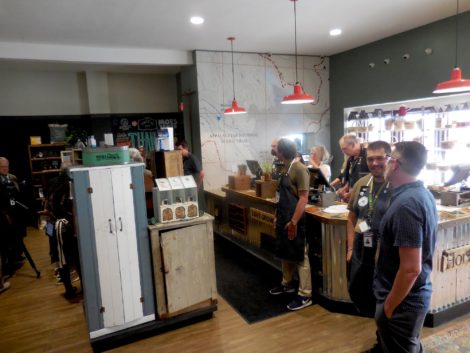 Canna Provisions employees await the big moment when customers stream through the doors for the first time. Photo: Terry Cowgill

Whereas employees working behind Theory’s counters work as both salespeople (or “budtenders,” as they’re known in the industry) and cashiers, Canna’s segregates the two. After passing through security, Canna customers are greeted by budtenders who guide the customer through the sales process and answer questions about the products. The small showroom has the look and feel of Antiques Road Show but with earth-tone colors.

Salespeople direct customers to the showroom floor’s antique cabinets, fling open the doors, point to the product (click here to see the menu) and explain the difference between, say, THC cannabis flower and CBD edibles. After customers make their decisions, they are guided to the cashier. 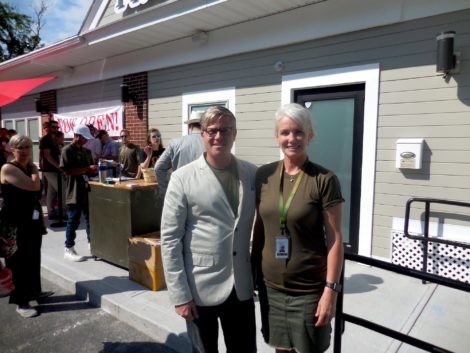 “It needed to be focused on customer first: having a one-on-one conversation to explain the products that are here; making sure they get products they want,” Canna chief operating officer Erik Williams said in an interview minutes before the store opened its doors. “We want them to actually come back. The last thing we want to do is sell someone something that they don’t have a good experience with.”

Williams is a veteran of the cannabis wars, having been the head of the Connecticut chapter of the national marijuana-rights group NORML, which played a key role in passing legislation to decriminalize pot and legalize medical marijuana in that state in 2013.

Canna CEO Meg Sanders worked for several years in the cannabis industry in Colorado, which was the first state to legalize recreational use in 2012. Asked how her experience in Colorado is relevant to Massachusetts, Sanders said, “What we’re seeing is the culmination of a lot of knowledge and love and experience, and also being able to really express our values.”

“What are your values?” this reporter asked.

“We just really believe cannabis is a team sport,” Sanders said, pointing to her sales staff, bright-eyed and bushy-tailed in the face of the imminent rush of opening-day customers. “It’s like life. We can be thoughtful about where everybody is on their cannabis journey.”

As for the economic impact of the store and the cannabis industry in general, both Williams and Sanders were bullish. Their store alone has a payroll of 43 full-time equivalents.

Entry-level employees start at $16 per hour and it is expected that most will advance to $18 after a 90-day probationary period, at which point health and dental benefits are also offered. Managers, Sanders explained, make $55,000 per year and higher. All are Metrc certified.

“In my opinion, based on what we know about the region, I think they’re very well compensated for what they do,” Sanders said.

The store will be open seven days a week from 10 a.m. to 8 p.m. Some employees will be needed one hour earlier and others for an hour past 8 p.m. to open and close the store. “That’s a lot of hours for a lot of people,” she noted.

Williams see a synergy between cannabis and the cultural and wellness industries in Berkshire County. He pointed to organizations such as Canyon Ranch, the luxury retreat in Lenox, and Kripalu, the health and yoga retreat in Stockbridge. Williams also noted the substantial growth in tourism in Colorado and that cannabis-based tourism in that state has grown 51 percent since 2014. Click here to read more of his statement on that from an earlier Edge interview.

Williams called for a Berkshires or western Massachusetts “cannabis trail,” similar to wine trails, which are defined as a group of wineries that have joined together in an organization to help promote themselves collectively. Popular wine trails exist, for example, in nearby Connecticut, with another to the west in the Hudson Valley. 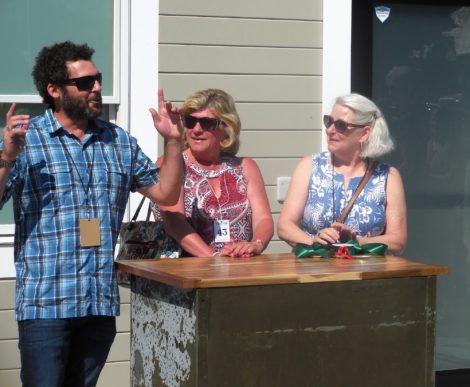 Also present in the media gaggle inside the store before the opening was Jon Piasecki, an award-winning landscape architect who also likes “to grow stuff,” he told this reporter — so much so that he has entered into a partnership to grow marijuana for Canna.

“They’ve got a bunch of stuff they want me to grow for them,” Piasecki said.

Piasecki, a cannabis enthusiast, added that “it’s a very interesting plant … it has 8,000 years of history behind it and it’s used for fiber and medicinally. It provides essentially a molecular resistance to the stupidity that our world is. All of that is coming together with these young folks here who are energized.”

Piasecki, who is also an experienced horticulturist, currently has an application for marijuana cultivation before the state Cannabis Control Commission (CCC). He joins at least two others planning to grow marijuana outdoors in South County: Ted Dobson and Nova Farms, both in Sheffield. Piasecki, a member of the West Stockbridge planning board, was also bullish on the economic impact of cannabis.

“It’s a game changer. Winter comes in the Berkshires and there’s nothing,” Piasecki said. “Young people like this, they’re really part of something bigger.” 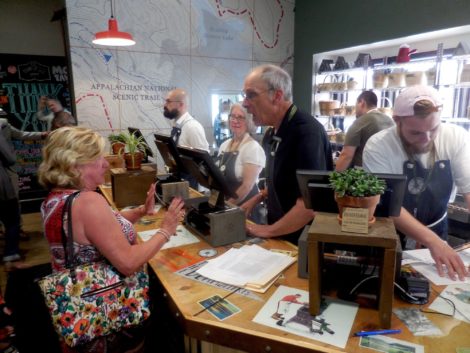 Lee selectwoman Pat Carlino has a few questions for Canna employee John Pitha. Here the camera lies. They were not angry at each other. It was noisy so they had to raise their voices to be heard. Photo: Terry Cowgill

In a brief interview, Carlino told The Edge that Canna has been working closely with the Lee Police Department and its chief, Jeffrey Roosa, on issues of security, parking and traffic control. At Canna’s expense, off-duty police officers will work traffic control details until they are no longer needed.

This reporter told Carlino he was especially interested in the economic impact of the store. “We are, too,” she smiled.

Carlino said the host community agreement negotiated with Canna provides for a 3 percent local sales tax, on top of the state excise and sales taxes, for a total of 20 percent at the point of retail sale. In addition, Canna will pay an annual community impact fee of $5,000 to be used, most likely, for education or some other community benefit.

“It’s exciting,” Carlino said. “It’s interesting and we’ll see where it goes, but I don’t see any problems other than maybe traffic for awhile, but I don’t really see any downside.”

Lee has imposed a two-shop limit within its borders, so there is room for one more. Canna also has an application to the CCC for a grow facility in the Quarry Hill business park and for a retail operation in Holyoke. Both are currently in the permitting stage with the CCC. 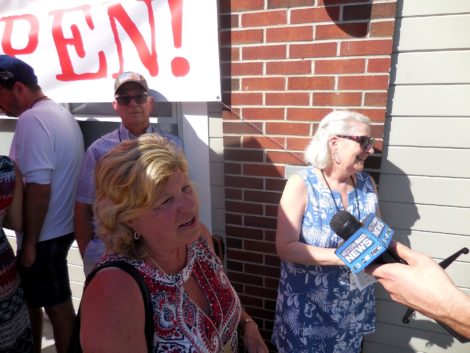 There are three other cultivation applications pending, Carlino said: one on Route 102, one at the old Greylock Mill and a second at Quarry Hill. The town will allow 14 licenses: two for retail and 12 for cultivation.

Both Williams and Sanders say the town has been a pleasure to work with. The project received a special permit from the Lee Board of Selectmen last year and later completed the site plan review process with the planning board.

Williams said he is confident that Canna will not lose customers when the neighboring states of Connecticut and New York eventually legalize adult-use, in part because he hopes to build brand loyalty that will keep them coming.

Meanwhile, Canna is, for the time being, well positioned to take advantage of its location. Residents of the Albany, N.Y., area and points west will no longer have to drive back roads to get to Great Barrington. They can just hop on the New York State Thruway and take Exit 2 off the MassPike in Lee.

“We are extremely convenient, but we do hope people will stay and enjoy the Berkshires,” Williams said. “A lot of our advertising and marketing are promoting other businesses.”

— Gertrude Stein
Read next: Art shows this summer: A journey through time