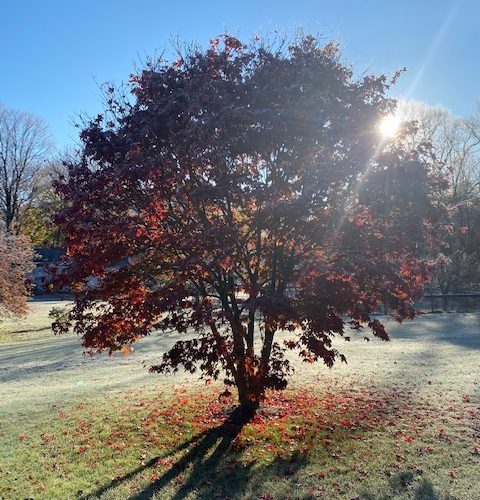 I don’t sleep well these days. My friends and family who don’t gorge on the terrible news sleep much better, I imagine. They seem steadier, less antsy, more attentive. I imagine they don’t have an immovable block of icy dread filling their torsos, like I do. I’d like to stem my news consumption, but even an unhealthy routine feels better than none, and so off I go first thing to the headlines. The dreams that precede this routine feature irresolvable storylines set in apparently random places. I rarely, for instance, have occasion to think about Arizona, yet that was the setting for the other night’s slow-moving nightmare. The next morning, Arizona was the setting of The Daily Podcast’s story on the inscrutable Biden-Trump divide among Latinx voters who have very similar backgrounds. It’s like my mind is predicting the confusions of the near future instead of rehashing what’s unresolved in my past.

I don’t sleep well, but at the same time, although it’s just eight thirty on Saturday morning now, what I really want to do is go back to bed and wake up on November 4th. Then, just as the dark is lifting outside my windows, I’d like to poke my head over the covers, and have my husband tell me in comforting tones that peace and good will and common sense have prevailed, no one has died trying to exercise their right to vote, our laws have held, and our army has not been called up against the citizens it exists to protect. I want to wake up to the knowledge that my broken country is in the process of knitting itself back together.

I don’t understand how and when the divisions started, how my mother and my uncle came to occupy two separate informational worlds, where what’s right for her is wrong for him, and what’s right for him is wrong for her, how he believes Amy Coney Barrett’s graciousness will change mom’s mind, how she thinks that this New York Times article will do the trick with him. I don’t understand how the two young Arizonan men of Mexican descent featured on the Daily, who both experienced trauma early in life at the hands of law enforcement, could come to such wildly different conclusions as adults about what policies are best for Mexican people.

Good writing, the sort of writing I want to do, probes mystery, as in: “Something that has not been or cannot be explained, that is unknown to all or concealed from some and therefore exciting curiosity or wonder….” The divisions in our current politics do not qualify as mysteries. Their inscrutableness does not excite any curiosity or wonder, or hold out promise for increasing understanding, or for coming to solutions. People on the two sides move in parallel lines on our own tracks, and the lines will never intersect, never connect. I hate it.

I want mystery. I want beauty. I want truth.

This morning I woke up very early, against my will, long before the darkness had begun its retreat. “Why can’t I just sleep through this?” I dreamily demanded of myself. But my body decided five-thirty was a good time to be roused today. I’d like to boast that I ignored the insistent call of my laptop from under the bed, that I jumped up, stretched, put on warm clothes, leashed the dog and took her for a brisk, healthful walk on the rail trail through the dark woods, and filled my head not with another brutal series of ugly facts I can do nothing about, but with leaves crunching under frost, reminding me of a long-ago fall morning and my white Reebok sneakers crunching across the bridge to the garage, or the hoot of a barred owl somewhere in the distance that sounds like mystery itself.

Instead, of course, I just grabbed for the laptop and settled in on the couch for my morning misery. But in between headlines, my husband, who did take the dog for a brisk walk, informed me that Orion was worth a look. I went outside in my slippers. The hunter’s constellation was enormous, and so bright and so close I felt I could touch his belt of stars. We all have the mystery of Orion to ponder. He does not belong to anyone. The stars can’t help but spark wonder. We can hold hands together on the grass and wordless watch them and ponder the mystery of stars. 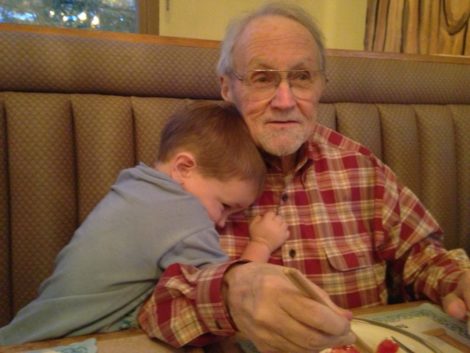 Orion’s beauty put me in mind of the maple trees again. I turn my attention to maple trees in October, because my father died on October 8th, 2014, and the bittersweet weeks leading up to his death are, for me, awash in red and orange and yellow and brown maple leaves. The day he came home for the last time it was raining, and I followed the ambulance as it moved very slowly — there was no rush, and no siren needed — through a shower of wet leaves.

We situated his hospice bed in the living room with a view of the leaves falling onto the Green River. One day he stopped seeing things as they are and started clawing at the air in front of his eyes. The gentle night nurse told me that the hearing is the last sense to go, so I continued to describe the falling leaves, the warmth of the sun, and the two deer who’d emerged from the woods to drink at the water’s edge. When it seemed he could no longer hear me, the silent death journey of leaves from branch to ground, branch to water kept me company, and left me to ponder the greatest mystery of all.

Who’s the thoughtful paramedic who drove my father home so carefully? Someone who’s voting for the other guy? And the gentle nurse who swabbed his mouth and cleaned his body, who got up to use the bathroom one night and returned to find Dad had waited to be alone before leaving, who is he voting for?

It’s a beautiful day, I think I’ll get outside now.