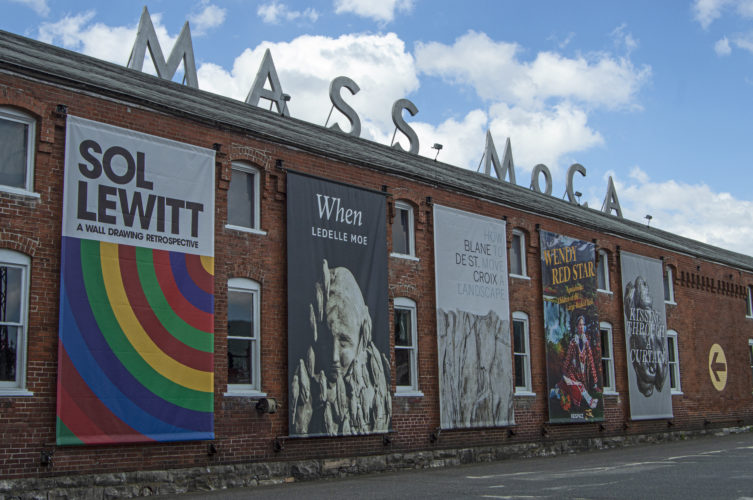 If Rip Van Winkle had just awakened from that twenty-year nap he took, he might remember that MASS MoCA had just opened (in 1999) as he closed his eyes; no doubt he would have thought it a folly. Welcome to 2020, Rip, and join the more than 160,000 people who visit MASS MoCA annually — in non-COVID years. It’s made North Adams one of the Northeast’s premier cultural destinations. But if Rip wants to start bowling again instead, he’ll have to nap for a little while — the 30-lane, ten-pin palace that is Greylock Bowl & Golf west of town (temporarily closed), and 18-lane, all-candlepin Valley Park Bowl & Bounceland south of town. Valley Park is currently open Wednesday 4 to 10 p.m., Friday and Saturday 1 to 10 p.m., and on rainy days. Hours will be expanding; call 413-664-9715 for updates.

It was not always so. North Adams was built on manufacturing, thanks to power generated by the Hoosic River flowing right through the center of town. Shoes, bricks, hats, cloth, marble, and the iron plates that sheathed the Monitor in the Civil War poured forth from North Adams’s busy factories. When the Depression shut many of those factories down, the Sprague Electric Company arrived to save the day. Sprague’s development and manufacture of components for early NASA launch systems and the consumer electronics industry provided employment for more than 4,000 workers in the post-war period, until foreign competition in the 1980s led to the closing of the firm and a sharp decline in the town’s economic fortunes.

Many former New England mill towns have never recovered from such setbacks. For North Adams, recovery came from a surprising source: contemporary art. Sprague Electric’s beautiful and extensive brick buildings, dating from the 19th century, lay idle. Thomas Krens, then Director of the Williams College Museum of Art, saw an opportunity. MASS MoCA was born and has been growing in space and scope ever since; in 2017 an already vast museum doubled its exhibit area by renovating still more of the former Sprague facility. The Museum hosts both temporary and permanent exhibits, spaces for artists in diverse media to create large-scale works, and musical events. After a COVID closing, MASS MoCA is open again every day but Tuesday but by prior timed-entry reservation only. Musical performances have also restarted on a BYOC (Bring Your Own Chair) basis. (Check the MASS MoCA website for details.) The 2020 FreshGrass Festival has been cancelled.

The town began to thrive once again. Galleries, restaurants, and shops sprang up to cater to visitors. The ongoing River Revival project re-imagined the Hoosic as a community resource. The town (technically a city, the smallest in Massachusetts), now has a vibrant Cultural District and a Downstreet Arts Initiative. The creative economy has spread to other former factory facilities as well, now home to artisans and specialized producers of everything from food to beer. The former Norad Mill west of downtown is now honeycombed with businesses and shops. Freia Yarns, which produces hand-dyed yarns, relocated there from California, and for DIY knitters, the Spinoff Yarn Shop, located in the same building, is worth a trip up to the third floor (there’s an elevator — and a view).

If downtown gets too trendy for you, nature beckons on all sides with hiking trails, picnic spots, and recreational opportunities. Got trout? If not, Berkshire River Drifters will take you to where the browns and rainbows lurk. The free concerts on nearby Windsor Lake. have been cancelled this year. But you can bury your disappointment in good local produce from the weekly Farmers Market — it’s one of the biggest in the Berkshires. Orders are accepted on the web site Monday through Wednesday from 10 a.m. for local delivery or for pick-up on Saturday.

Hotels, stores and restaurants are following COVID procedures. Looking for a novel place to stay? Consider The Porches, which bills itself as (brace yourself) “an intimate 47-room boutique property whose retro-edgy backdrop and industrial granny chic décor combine to create a strikingly colorful style all its own;” it’s right opposite MASS MoCA. Trendy TOURISTS, located down by the riverside where an old motel once stood, brings you close to nature (there’s also a pool). To eat, try PUBLIC for original, farm-fresh take-offs on American classics and a wide selection of craft beers (due to COVID-19 restrictions, reservations are encouraged, although a portion of the dining room is held nightly for walk-ins); Gramercy Bistro (“eclectic modern fare” but temporarily closed); or the Capitol on Main Street (“upscale comfort food” now available for takeout and outside dining), all within walking distance of MASS MoCA, which itself has a nice café for coffee or lunch. For pizza, try Ramunto’s, which offers delivery and takeout. If you prefer food for the mind, the Massachusetts College of Liberal Arts (MCLA) is not far, and it too has caught the art bug with its innovative undergraduate art programs and MCLA Gallery 51. The Gallery is currently closed, but watch its web site for announcements of online programming.