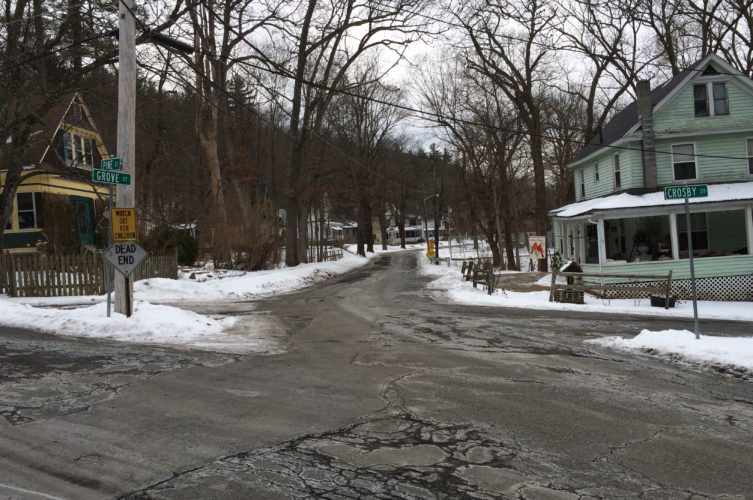 Great Barrington — The town just got a bump in its road money after Gov. Charlie Baker released $100 million in Chapter 90 transportation funds to communities across the state, and increased Great Barrington’s share from $419,219 to $628,828.

Gov. Baker told the Massachusetts Department of Transportation to release the rest as soon as he set foot in his new office. It began with a promise made at a Massachusetts Municipal Association (MMA) meeting last January, when then candidate Baker said he would release the entire $300 million “before I take my jacket off on my first day,” prompting local government officials in the audience to swoon with joy.

And those Great Barrington residents who navigate a daily course of potholes and frost heaves will soon join them, since Department of Public Works Director Joseph Sokul confirms it: “Paving projects go out to bid in February.”

And who are the blessed among us? Monument Valley Road, Park Street in Housatonic, and the Brooklyn District of Great Barrington: Quarry Street, Pine Street, Higgins Street, Humphrey Street, Grove Street, Crosby Street, and Warren Avenue.

Town Manager Jennifer Tabakin was pleased, and said “all the [roadwork] priorities were outlined in the capital plan,” and those projects will be discussed during the budget process.

Chapter 90 money, Sokul said, can be used for any work and maintenance on roads, including sidewalks, road sealing and design engineering. Cities and towns are reimbursed from the funds, which are allocated to communities based on a formula that considers population, employment and road miles, among other factors.

A recent statewide survey by the MMA reveals that the true cost of keeping local roads across the state in good repair would require total spending of $562 million. Most communities spend far less for lack of money, the MMA concluded.