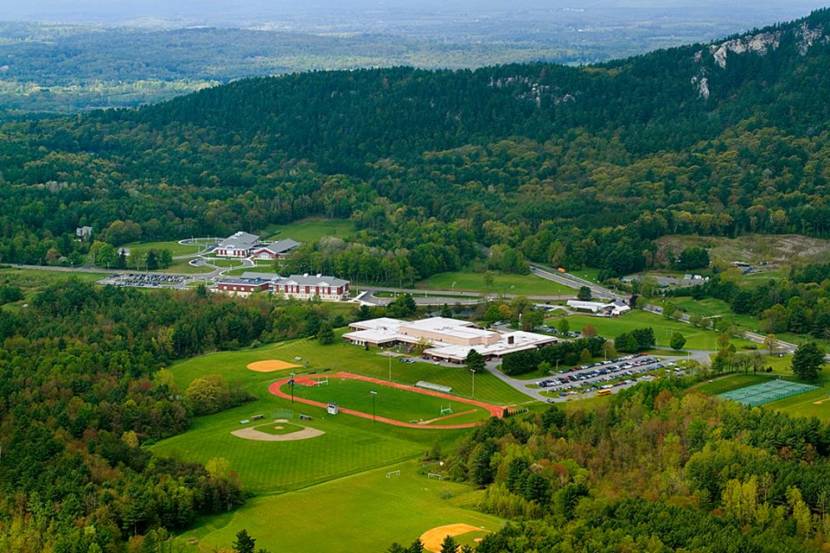 Monument Next Steps members are clear that they want to overhaul Monument Mountain Regional High School, center, but precisely how to do it remains and open question.

Great Barrington — A committee charged with recommending an approach to fixing Monument Mountain Regional High School will not advocate specifically for a new school on a different footprint or the renovation of the existing structure.

Instead, Monument Next Steps, the panel charged by the Berkshire Hills Regional School Committee with recommending a plan, will present to the school committee a vision and a thorough list of educational goals it hopes to accomplish in any future action to fix the ailing high school.

See the full video below of the April 23, 2019, Monument Next Steps meeting:

Next Steps co-chair and school committee member Bill Fields of Great Barrington said the difficulty of making a clear recommendation was by now obvious to everyone. Earlier this month, the panel was unable to reach a clear consensus and tabled the matter until last night.

Superintendent Peter Dillon cautioned that failure to reach a clear consensus might mean that “potentially we could be leaving the feeling that we didn’t do our job.” Click here to see an overview Dillon had prepared in advance of the meeting, along with a draft motion.

Still, Dillon said he was comfortable with the panel’s decision not to recommend to the school committee a specific plan, a sentiment that Fields agreed with:

Continuing to weigh heavily on the minds of Next Steps members were the two most recent attempts to rebuild Monument. This will be the third try since 2013 to get state aid for the ailing high school. Within the span of one year, a pair of $50 million-plus proposals failed when Great Barrington, by far the largest of the three towns in the district, failed to approve an override to Proposition 2½, a state statute that limits tax levy increases. In both cases, the state would have paid for almost 41 percent of the cost, not counting incentives.

While Next Steps members are cautiously optimistic this one might pass, they appear confident that circumstances have changed since 2014, perhaps enough to affect the outcome of a potential third try. Click here to see why.

Asked by Next Steps member James Santos whether he was comfortable with the panel’s approach and the presentation it would make to the school committee, school committee Chairman Steve Bannon replied: “I am because I sat through all of the meetings. If the presentation is thoughtful and shows all the work that you did … and it kind of reinforces what I think we went through last time … [and that] it was not an easy decision.”

Members also listened to a presentation from Monument alumnus and Next Steps member Joshua Shapiro summarizing the panel’s findings thus far. Shapiro, who also teaches at New York University, echoed the sentiments of others when he noted that Next Steps doesn’t have enough information to make a definitive recommendation.

Bannon added that there have been no discussions yet with architects or with the Massachusetts School Building Authority, which must approve the district’s statements of interest and presumably fund a portion of any project.

“From where I’m standing, it’s clear that we don’t have enough information,” Shapiro said. “One of the worries everyone has is the community is going to be split on this.” Shapiro added that perhaps it would be better for Next Steps to focus “on the educational vision that we think fits the future of Monument [and] that … we need to get the community in agreement around that vision.”

In addition, Monument 12th-grader Lucy Doren informed members about a project she has been doing as part of an internship. Since mid-February she has been working with about 20 other Monument students from all grades and class levels.

The goal, Lucy said, was “to redesign the curriculum and the architecture of Monument” and bring their findings to a symposium at New York University Monday, May 6. Her group recommended a remodeling and renovation “of the spaces we already have,” Lucy explained. Her full presentation can be seen in the video above by fast-forwarding to 41:00.

In December, the MSBA informed Berkshire Hills it would not be considered for funding in the current cycle. Click here to read the letter, which invited the district to resubmit a statement of interest later this year. A new SOI has since been sent.

Dillon has said the MSBA will likely respond by December and that he expects the reaction from the authority to be much more positive given the growth of the school’s Career/Vocational Technical Education program, which recently received three important grants and will no doubt be a significant factor in the design of any new or renovated high school.