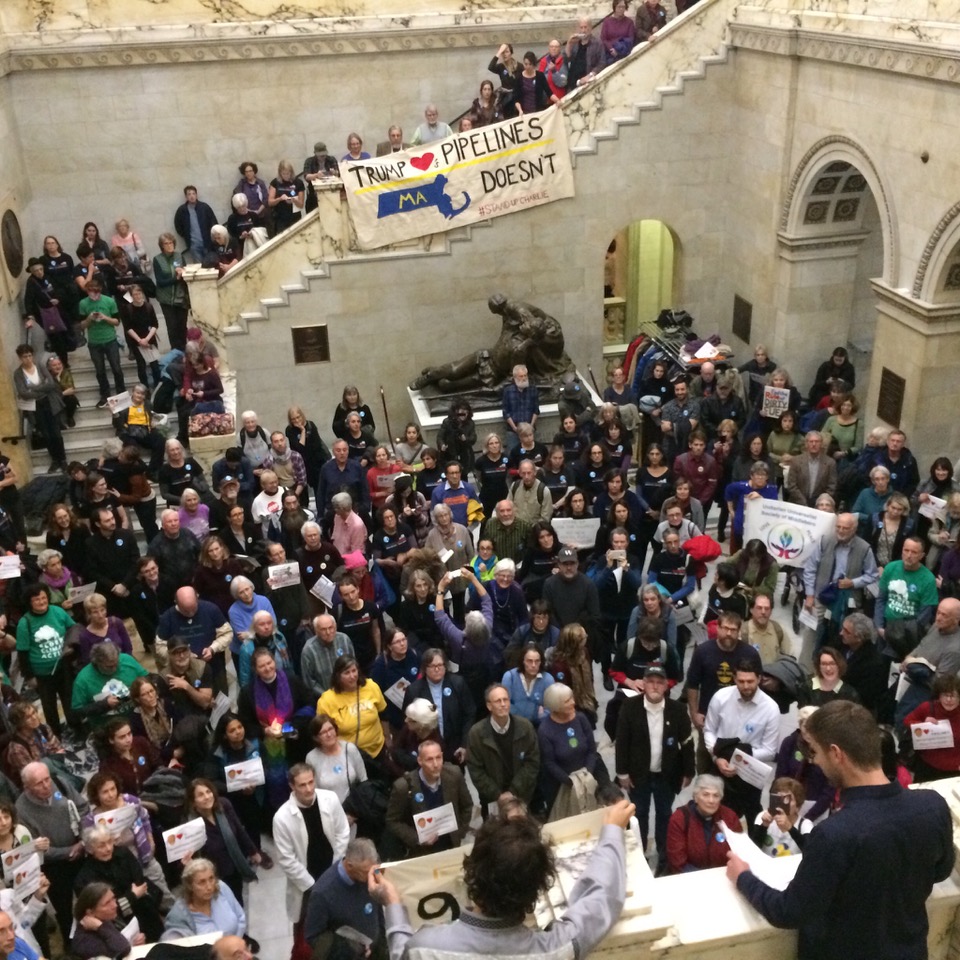 Boston — After two months of asking Gov. Charlie Baker to lead on climate change issues and ban new fossil-fuel infrastructure, 26 Massachusetts residents joined by approximately 300 supporters launched a sit-in around noon Thursday in the governor’s office. The individuals, affiliated with 350 Mass Action and various faith groups, refused to leave until Baker signed an executive order that effectively stops the building of new fossil-fuel infrastructure projects in Massachusetts. Baker did not respond to their requests, and the Massachusetts State Police charged the 26 people with trespassing and unlawful assembly when the building closed at 6 p.m. that evening.

The United States is now the only nation in the world that does not pledge to uphold the Paris climate agreement, following last week’s announcement by Syria of its intention to join. After a sit-in last week, Baker told State House News that he doesn’t want to “take options off the table,” and proclaimed that “this administration has been a national leader in continuing to reduce our carbon footprint.”

Those sitting in included a retired medical doctor, a leukemia researcher, three ordained clergy members, parents and grandparents. They are among over 350 concerned residents who have personally visited the Baker’s office over the past two months, asking him to commit to stopping new fossil-fuel projects.

“As a Christian, I believe that God entrusted the world to our care. Desecrating the earth by disrupting its climate and unraveling the web of life is an affront against our Creator. In order to avert climate catastrophe and to preserve a habitable planet, we must keep fossil fuels in the ground. We call upon the Governor to help us move as swiftly as possible to a clean energy future in which all communities can thrive,” said Rev. Dr. Margaret Bullitt-Jonas, missioner for creation care for the Episcopal Diocese of Western Massachusetts and the United Church of Christ Massachusetts Conference.

“As a doctor, I tend to go by ‘First, do no harm.’ I think that’s a good rule not just for doctors, but for anyone who has power. And our scientists tell us that by investing any further in fossil fuels, Governor Baker is doing harm; so I think he needs to stop, right now. We know that President Trump is doing tremendous damage to our country and our planet with his blind support of fossil fuels. This is the Governor’s chance to break with the Trump madness, put his foot down, and mandate that Massachusetts build only what’s best for our state and for the world. I’m not ready to give up on Patient Earth and I’m hoping Governor Baker will join the treatment team,” said Dr. Sue Donaldson, a member of 350 Massachusetts.

Jim Mulloy, Ph.D., and member of 350 Massachusetts, said: “As a scientist, I am driven by the data. 97% of climate scientists agree that human activity is the main contributor to climate change. It is incumbent on the politicians to listen to the experts and craft policy to avert the crisis we face. Instead, Governor Baker is taking a page from President Trump’s playbook and catering to the whims of the fossil fuel corporations while sticking taxpayers with the bill. We expect better in Massachusetts. Governor Baker, sign the executive order and galvanize the green energy revolution in Massachusetts.”

HeatSmart Mass is a community-based education and group purchasing program for clean heating and cooling technologies, which, via a $9,000 grant, will enable Great Barrington to reduce its carbon emissions, lessen the environmental impact of energy usage for indoor heating and help residents save on home heating costs.

Great Barrington will kick off its HeatSmart initiative early next year under the leadership of Great Barrington Energy Action Team member and newly-appointed HeatSmart coach Michael Feldstein. With funding in place to help residents modify their home heating systems, the town intends to launch its efforts by connecting with residents who have signed up for the Solarize Mass program and expressed an interest in green energy.

Great Barrington will work with partner organizations the Great Barrington Senior Center, Construct, Volunteers in Medicine Berkshires, the Guthrie Center and Greenagers to educate residents on financial aid programs that would help defray the costs of switching to more environmentally friendly heating sources.

“The Columbus Avenue Parking Garage is a major priority for the further economic development of Pittsfield,” said Farley-Bouvier. “The rebuilding of this garage has been identified as a lynchpin by downtown merchants, our arts institutions, and housing developers. Working with Mayor Tyer, we will use every tool we have to get this project completed. Securing dollars in a bond bill is an important step in what can be a long process.”