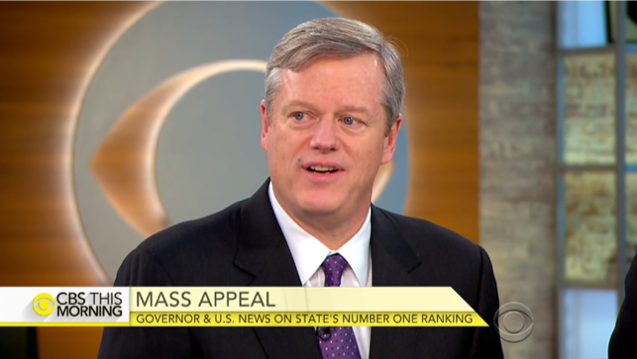 Boston — The Commonwealth of Massachusetts has been named the best overall state in U.S. News & World Report’s inaugural report. This best state ranking evaluates all 50 states in various categories, with Massachusetts ranked the No. 1 overall state, No. 1 in health care, No. 2 in education and among the top 10 for economy and crime and corrections. Massachusetts was recognized for having the most accessible health care and is ranked third for Pre-K through 12th grade education.

The new Best States rankings and platform was designed to inform people about what is working across the country and includes rankings that measure states overall and in the categories of education, health care, government, infrastructure, economy, opportunity, and crime and corrections.

The Leading States Index and analytics for the system were produced by McKinsey & Company to inform state government officials on where to focus efforts and where to make improvements for constituents.

More information on methodology and complete rankings is available online.

Northampton — In its 12th year commemorating International Women’s Day, Western Mass Code Pink invites the community to meet and celebrate some half-dozen courageous and fearless women at a gathering on Wednesday, March 8, from 6:45 to 9 p.m. at First Churches of Northampton’s Lyman Hall.

Presenters will include Vida Tayebati, whose one-woman performance piece will draw on her years doing risky underground theater in Iran; Irene “Strong Oak” LeFebvre, the executive director of the Visioning B.E.A.R. Circle Intertribal Coalition Inc. and a co-author of the multicultural curriculum “Walking in Balance,” who is currently facilitating a workshop for people of color in Springfield that teaches them how to listen and communicate in the ways of Native Americans; Holden School Committee member, mother of five, IBM engineer and master inventor, and co-founder of EnjoinGood.org Asima Silva of Worcester, who will speak on “Understanding the American Muslim Woman;” and former Burmese refugee-turned-U.S.-citizen Moo Kho Paw, the business manager at Prosperity Candle in Easthampton. Women from Voices Carry/Voices from Inside will share stories and poetry.