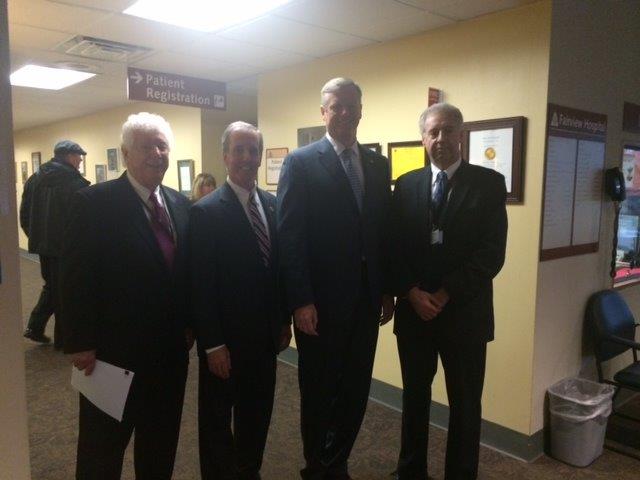 Great Barrington — Massachusetts Governor Charlie Baker attended a meeting at Fairview Hospital on Tuesday, December 22, to discuss the opioid and substance abuse crisis in the Berkshires in an effort to understand its regional scope and the actions that could be taken by the community to address it.

During the meeting Phelps provided an overview of the health landscape and significant socioeconomic challenges facing the region, followed by a presentation by BHS Vice President and General Counsel John Rogers who discussed the Berkshire Community Pain Management Project that began in 2005.

Diane Kelly, BMC’s Chief Operating Officer, provided additional statistics and an overview of the current system of care, citing significant gaps that exist in Berkshire County for patients following hospitalization. “It makes no sense to keep a patient hospitalized for two to three days in detoxification and then not have access to the appropriate care for three to six months,” she said, referring to the current waiting time for available continuing care beds in the region.

The governor, who noted that Berkshire County had recognized the issue before many other communities, acknowledged the significant effort and collaboration that has taken place, but he noted that  remains the data indicates abuse continues to rise at an alarming rate. “We all know someone who has been touched by this,” said Baker.

The meeting came at an opportune time, as the governor will soon be reviewing the needs of the Berkshires; an application has been submitted to the Department of Public Health to add 30 beds in the region for needed continuing care.