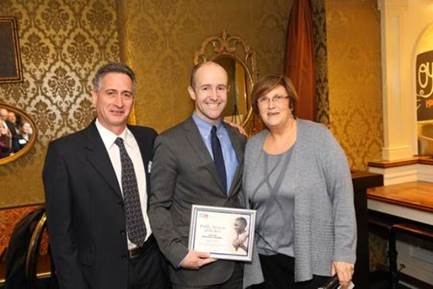 Boston – On Thursday (March 10) State Senator Benjamin B. Downing (D–Pittsfield) was named the 2016 Public Advocate of the Year by the Food Bank Coalition of Massachusetts for his successful efforts to increase state funding for the Massachusetts Emergency Food Assistance Program (MEFAP).

An amendment filed by Senator Downing to the FY16 budget increased MEFAP funding from $15 million to $17 million. The Food Bank Coalition is advocating for an increase to $20 million in FY17 – enough to provide 23 million free and nutritious meals to families in need.

According to the Food Bank Coalition, more than 12 percent of Massachusetts residents are “food insecure,” facing regular uncertainty as to where their next meal will come from. More than one third of those characterized as food insecure are children.

MEFAP partners with local farms and manufacturers to provide millions with healthy, locally sourced meals each year. Last year the Food Bank of Western Massachusetts distributed 2.8 million MEFAP meals and leveraged 6 million meals from other sources. An increase in MEFAP to $20 million would, according to the Food Bank, allow it to distribute an additional 425,000 meals next year.

Pittsfield — The next 350Mass Berkshires monthly meeting will be held on Wednesday, March 16, at 6 p.m. at the Unitarian Universalist Church. The meeting will include training by Judy Eddy to prepare for the upcoming Tuesday, March 29, Pittsfield Department of Public Utilities hearing regarding Kinder Morgan’s proposal to survey land for pipeline citing. The 350Mass Berkshires legislative team will also present on its process for meeting with state legislators in their home districts.

A snack potluck will precede the meeting at 5:30 p.m. It is requested that those interested in attending the meeting RSVP online.

Washington, D.C. — The Democracy Spring sit-in and march will aim to bring awareness and action to election reform. The week-long march from the Liberty Bell in Philadelphia, Pa., to Washington, D.C., will begin on Saturday, April 2. When marchers arrive at the Capitol on Friday, April 11, they will be joined by thousands more who’ve come from across the country to engage in peaceful civil disobedience for at least a week. Before setting out the marchers will ask Congress to take immediate action to end big money in politics and make the 2016 elections free and fair for all people as equal citizens, or to be prepared to send thousands of patriotic Americans to jail simply for demanding an equal voice. Leaders such as Lawrence Lessig, Zephyr Teachout, Cenk Uygur, and Mark Ruffalo have pledged to risk arrest and more than 70 organizations have signed on to help.

A group from western Massachusetts is forming to assist interested area people in traveling to the march. For more information on the local delegation, contact Uli Nagel at (413) 329-3514 or Lynne Posner at (413) 229-6645 or lynneposner1@gmail.com.