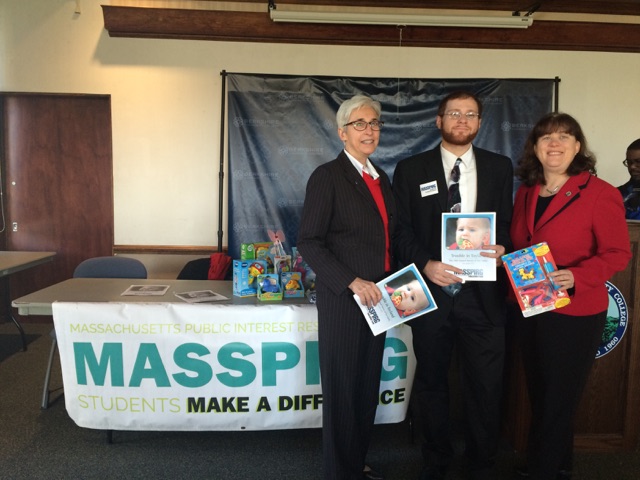 Pittsfield — Dangerous or toxic toys can still be found on America’s store shelves, according to the Massachusetts Public Interest Research Group Education Fund’s (MASSPIRG) 30th annual Trouble in Toyland report. The survey of potentially hazardous toys found that, despite recent progress, consumers must still be wary when shopping this holiday season.

The report reveals the results of laboratory testing on toys for toxic chemicals, including chromium and phthalates, both of which can have serious, adverse health impacts on a child’s development. The survey also found examples of toys that pose a choking hazard, extremely loud toys that can threaten children’s hearing, and powerful toy magnets that can cause serious injury if swallowed.

“We should be able to trust that the toys we buy are safe. However, until that’s the case, toy buyers need to watch out for common hazards when shopping for toys,” said Michael Basmajian, Massachusetts College of Liberal Arts‘ MASSPIRG Campus Organizer.

“Families need the tools to know what is safe for their children at various ages and the industry has to be continually held accountable” said State Rep. Tricia Farley-Bouvier, D-Pittsfield. “I find it particularly troublesome that it is almost always the lower cost toys that are hazardous which puts our most vulnerable families at a higher risk.”

“While we all want toys to be safe for our children to enjoy, unfortunately there are some that pose risks that toy buyers need to know. MASSPIRG is smart to bring these risky toy products to our attention” said Gailanne M. Cariddi, D-North Adams.

Key findings from the report include:

Over the past seven years, stronger rules have helped get some of the most dangerous toys and children’s products off the market. Rules put in place by the 2008 Consumer Product Safety Improvement Act tightened lead limits and phased out dangerous phthalates. Earlier this year the CPSC implemented a ban on small, powerful toy magnets. However not all toys comply with the law, and holes in the toy safety net remain.

“We need to protect our children in the best way we can,” said Avis Merrill, Director of the Norman Rockwell Early Childhood Center located on the Berkshire Community College campus in Pittsfield. “Part of that includes making sure children have safe educational toys both at home and in childcare.”

Boston — Conflict is natural in public life. Some conflict is “good” or constructive and some conflict is “bad” or destructive (harmful and/or dysfunctional). However, on-going public conflict over social issues can have damaging consequences to both local governments and communities. In the FY 2015 state budget, the Massachusetts Legislature commissioned the Massachusetts Office of Public Collaboration (MOPC) at the University of Massachusetts Boston to study conflict resolution needs of Mass. municipalities. The recommendations from the interim report of the study have been refined and prioritized by a committee composed of municipal officials and experts. A survey has been developed that seeks public feedback on these recommended solutions that are being developed for inclusion in the final report to be filed with the Legislature in December.

Those participating in the survey will contribute to the various approaches to dealing with destructive public conflict in Massachusetts. The survey will take about five minutes to complete.