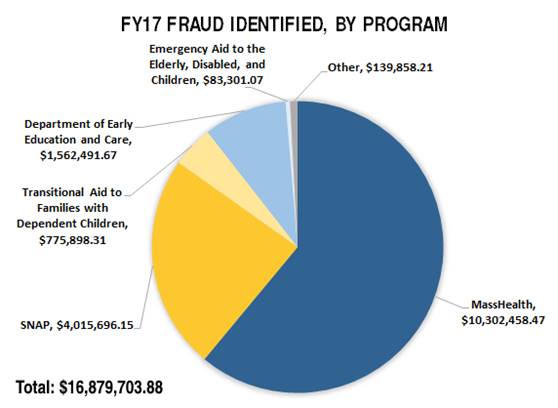 Boston — State Auditor Suzanne M. Bump Monday released the annual report for her office’s Bureau of Special Investigations, which identified a record $16.9 million in public assistance benefit fraud in fiscal year 2017, a 9 percent increase over the previous year. This marks the seventh straight year of increased findings by Bump’s office.

During the year, BSI investigations resulted in:

As state auditor, Bump has made it a priority to strengthen the integrity and accessibility of public assistance programs. In addition to identifying fraud in the programs, her office began a series of audits last year to identify barriers that individuals face when seeking assistance from public benefit programs. As part of this effort, Bump’s office has provided recommendations to reduce barriers at the Catastrophic Illness in Children Relief Fund and the Department of Veterans’ Services.

BSI investigates allegations of public-assistance fraud throughout the Commonwealth. Its work ensures taxpayer dollars are used effectively and that benefits are available to residents who need and qualify for them. BSI investigates programs administered by DTA and the Division of Medical Assistance. In addition, BSI has an agreement with the Department of Early Education and Care to investigate fraud in that program. BSI receives referrals for investigation from its agency partners, public tips, referrals from federal agencies and through the use of its data analytics tools.