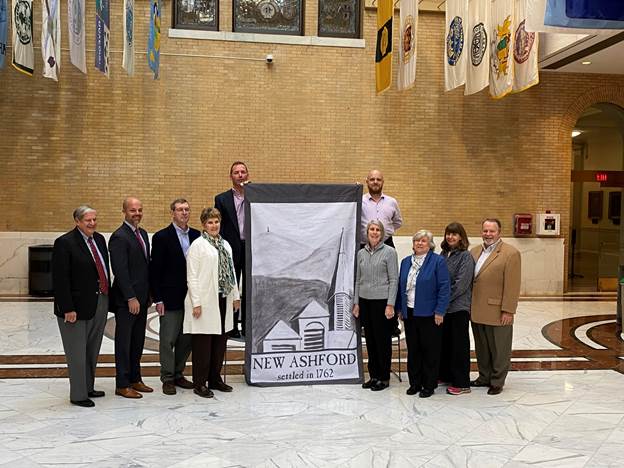 The flag was designed by New Ashford artist and historian Cindy Grosso. In the flag’s foreground is the steeple of a local church and cupolas of the local schoolhouses. The church in particular has significance for New Ashford: According to local legend, the church was built with the funds of a local gambler whose only restriction was that the “lucky five” dice be part of the construction. The dice can be found on the exterior of the building and are often overlooked in spite of their presence.

The cupolas are found on top of the recently refurbished one-room schoolhouse and the new one-room schoolhouse, now used as the Town Hall. The old school house was where Phoebe Jordan cast her vote Nov. 2, 1920, as the first woman voters cast a ballot for president in a national election.

In the background of the flag is the war memorial sitting atop Mount Greylock. Many from New Ashford have hiked to the summit, and New Ashford is often responsible for fire and rescue services on the mountain.

New Ashford’s flag was presented to the Bureau of the State House during Wednesday’s ceremony in the Great Hall of Flags, which serves as the largest function room in the State House. Two decades ago the Bureau began collecting flags from the 351 Commonwealth communities to display throughout the Great Hall, thereby improving the acoustics of the room. With only a dozen municipal flags outstanding, the Bureau is currently working on completing its collection.

There are still four communities from Hinds’ Berkshire, Hampshire, Franklin & Hampden Senate District without flags in the Great Hall. “I’d love to help bring these final flags to the State House,” said Hinds. “Anyone from Alford, Hawley, Savoy or West Stockbridge interested in working on a town flag is encouraged to call my office to get the specifics.”