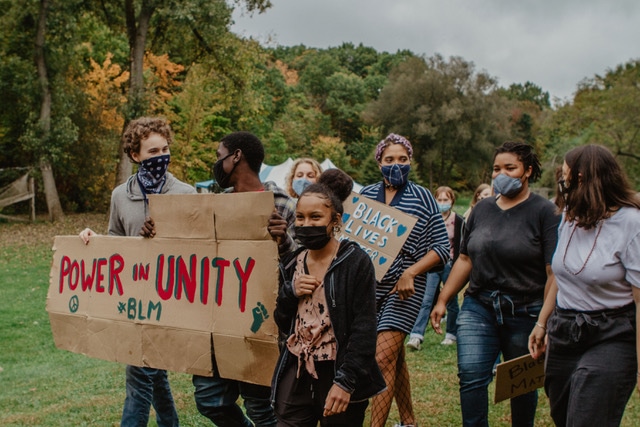 The rally was organized by two sixth-graders to coincide with the school’s annual Michaelmas festival, which celebrates courage, fortitude and service. Over 40 students from grades 5-12 joined in, along with faculty, staff and parents.

Four students gave speeches on the social justice struggle of Black and Indigenous people before the group marched around the campus with handmade signs with messages such as “Silence is Violence” and “Power in Unity #BLM”.

At the rally sixth-grader and rally organizer Isolde spoke to her fellow students about the resolve needed to achieve social justice for all. “We need to continue fighting if we really want change,” she said. “We are here fighting for the equality we believe in, and we will continue to fight until the violence stops.”

Addressing the social injustices faced by Indigenous peoples in the United States, seventh-grader Sophia said: “We acted as if these people did not exist, didn’t matter. This has to stop. To solve a problem, you can’t ignore it and expect it to go away. You need to look it in the face and acknowledge that it is there.”