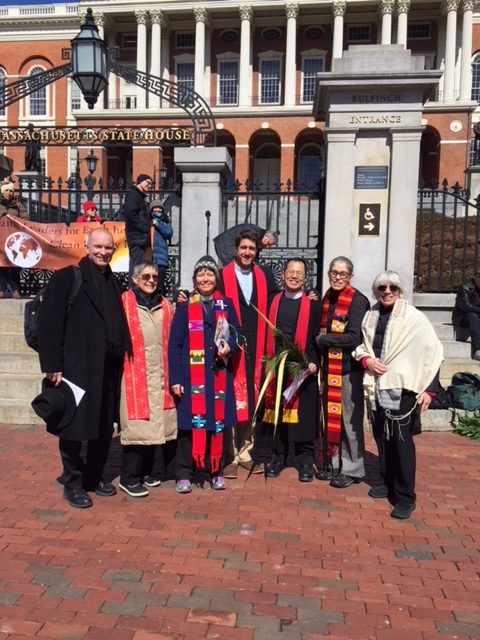 Boston — On Monday, March 26, at the beginning of Holy Week and shortly before Passover, more than 100 faith leaders and supporters representing at least 15 different Christian and Jewish faith traditions confronted Gov. Charlie Baker around his refusal to meet with them regarding their concerns about climate change. After back-to-back extreme weather events pummeling the Commonwealth this winter, faith leaders hosted an interfaith ceremony on the steps of the State House before heading inside to Baker’s office in order to renew their request for dialogue and to ask him to end his support for new fossil fuel projects.

“We are holding this event during a time of year that is a holy season for multiple faith traditions, because protecting our climate and God’s creation is one of the most important ways to practice our faith in today’s world,” said the Rev. Dr. Margaret Bullitt-Jonas, missioner for creation care for the Episcopal Diocese of Western Massachusetts and the Massachusetts Conference of the United Church of Christ.

The coalition of faith leaders had previously written a letter to the governor requesting a meeting to discuss the values that lead them to oppose construction of all new fossil fuel infrastructure in the Bay State. They received no response to their request and returned in order to make a more forceful request for a dialogue, and to state their willingness to prepare to lead and inspire a sustained campaign of nonviolent resistance to the ongoing expansion of fossil fuels.

After the interfaith ceremony, which highlighted frontline communities that are suffering and resisting new gas projects including groups from Sandisfield, West Roxbury, Weymouth, the Back Bay, central Massachusetts and Cape Cod, the faith leaders delivered their concerns to the governor’s door and renewed their request for dialogue.