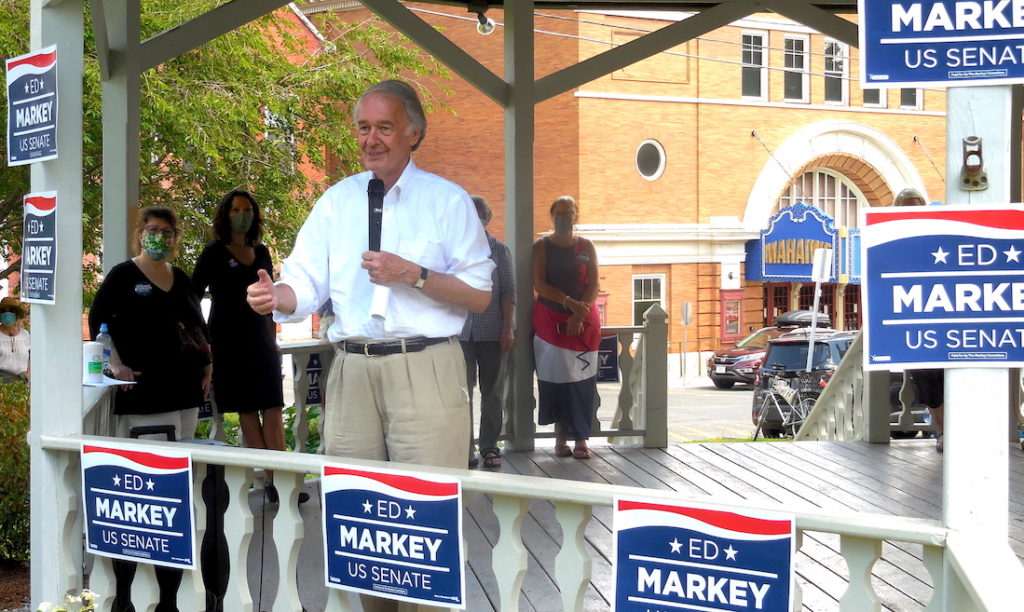 With one of the most consequential presidential elections in memory weighing upon us, it’s easy to forget that there are other less glamorous, but still important, offices up for grabs across the state.

There are relatively few Republicans in Massachusetts, so the Democratic primary often functions as the de facto general election. There are a handful of meaningful primaries for Congress and the state legislature affecting the eastern part of the state, but the most prominent race is a statewide contest. Click here to see the list of races for all of Massachusetts.

And of course, there is the high-profile Democratic primary for the 1st Congressional District, which covers about one-third of the state, including almost all of western Massachusetts, and Berkshire County in its entirety. More on that later.

Markey, 74, is only finishing up his first term in the Senate but previously had a long career in the House of Representatives, where he was a leader in environmental, energy and telecommunications issues.

For some temporal perspective, I’m 63 years old and when Markey, a Democrat from Malden, first announced a run for Congress, it was the spring of 1976. I was still a senior in high school. That’s how long Markey has been in the system.

Markey is a former member of the Congressional Progressive Caucus and while in the House, he earned a composite liberal score of 89.2 from National Journal. More recently, Markey co-sponsored the Green New Deal with progressive darling Rep. Alexandria Ocasio-Cortez, D-N.Y., who has endorsed Markey’s re-election, along with the state’s senior Sen. Elizabeth Warren. Both are progressive icons from very different generations.

At a rally last month in Great Barrington, Markey spoke fluently of the Berkshires. But moreover, his supporters, including Sheffield Board of Selectmen chair Rene Wood, touted his age as an asset.

See Edge video below of the Markey rally on July 31 behind Great Barrington Town Hall:

“Joe Kennedy says he should step aside because he’s 74,” Wood said of Markey in a letter to the Edge. “I’m that age and there is nothing wrong with being 74; we have much to give and do so on a regular basis. Anyone who says he should retire because of his age is guilty of ageism and needs to add ageism to their list of biases they are working to overcome.”

Wood, a member of the Five Town Cable Advisory Committee, pointed to Markey’s role in bringing WWLP (Channel 22) back onto Charter-Spectrum’s cable lineup. That move means Berkshire County residents no longer have to rely on Albany, New York, for local TV news.

Great Barrington Selectboard member Leigh Davis has also endorsed Markey, both at the rally in the gazebo behind Town Hall and on her Facebook page, insisting that people in the Berkshires “have a history of standing up for values” in the same way Markey does.

“Senator Markey is a leader, a change agent, and an effective legislator,” Davis said. “With his name on over 500 laws on the books, he fights for what’s right and gets the job done.”

Enter the 38-year-old Kennedy, the wealthy scion with the famous name, grandson of Robert F. Kennedy and grand-nephew of the late President John F. Kennedy. In his fundraising appeals, Markey, whose father was a milkman, casts himself as the underdog, reminding us at every turn that a member of the Bay State’s royal family has never lost an election in Massachusetts. Joe’s great uncle Teddy did lose the Democratic presidential nomination to Jimmy Carter in 1980, but won the Massachusetts primary handily that year.

But it’s also true that no incumbent U.S. senator from the Bay State has lost a primary since the direct election of senators began more than 100 years ago. So no matter what the outcome, this race will be one for the history books.

“A Kennedy has never lost a race in Massachusetts,” Thomas Whalen, a Boston University historian who has studied the family, told Boston Magazine. “If Joe Kennedy loses this race, the dynasty is over.”

Kennedy doesn’t disagree much with Markey on the issues, though, this summer, Kennedy has sought to sharpen the few differences that exist. Kennedy has attacked Markey over travel records showing that the senator spends less time in Massachusetts than any other member of the state’s congressional delegation.

Meanwhile, the Boston Globe endorsed Markey last month, asserting that, “The moment calls for a progressive champion with a solid track record.” The Berkshire Eagle endorsed Kennedy, while acknowledging that in the absence of policy contrasts, “the contest has often fomented a narcissism of small differences.” The Pittsfield-based daily also chided the senator for “his opposition in the 1970s to integrating Boston public schools via busing and yes votes on the 1994 crime bill and the Iraq War during his long tenure in the House.”

There are also two Republicans squaring off in a primary to run against the Democratic victor: Dover resident and Boston attorney Kevin O’Connor; and Shiva Ayyadurai, an author and university lecturer who ran unsuccessfully as an independent candidate against Sen. Elizabeth Warren in 2018.

Ayyadurai is perhaps best known to South County residents as the provocateur who set up shop in front of the Mahaiwe while Warren was holding a rally inside the performing arts venue. Brandishing a bullhorn, Ayyadurai shouted insults at Warren and her supporters, prompting one man to push the megaphone from the candidate’s face. The man was arrested for assault by Great Barrington police. Neither O’Connor nor Ayyadurai is given a snowball’s chance in hell of pulling off an upset victory over the Democratic nominee.

The race for the Democratic nomination in the 1st Congressional District also pits a longtime incumbent against a young upstart. In some ways, it’s even more interesting than the Senate race.

Incumbent Richard Neal has been representing the district in one form or another since 1989. Before that, he was the mayor of Springfield for five years. The only time his reelection was seriously threatened was in 1992 when the House banking scandal broke and it was revealed that Neal had made 87 unpenalized overdrafts at the House bank. That November, Neal still managed to win 53% of the vote in a three-way race.

Neal, a former high school history teacher, moved steadily up through the ranks to House leadership positions and now chairs the powerful House Ways and Means Committee (that committee’s name is always preceded by the word “powerful”). Neal is a recognized expert and leader on tax policy and chairs the Joint Committee on Taxation. For an example of Neal’s wide appeal, look no further than Republican Gov. Charlie Baker’s endorsement of him this week.

But that kind of perch comes with risks, too. Neal is also one of the top recipients of corporate money in Congress, last year raising $1.4 million from corporate political action committees representing private equity and pharmaceutical companies, neither of which are terribly popular with progressives. Indeed, Neal’s campaign recently sent a threatening letter to a Springfield television station demanding that ads from an anti-Neal PAC highlighting his corporate fundraising habits be taken down.

In 2018, attorney Tahirah Amatul-Wadud ran against Neal, pointing to what she called “open secrets” about his donors, and was trounced. This year, however, progressives saw a wider opening and Alex B. Morse, the young mayor of Holyoke, stepped up to the plate.

Morse was endorsed by the aforementioned Alexandria Ocasio-Cortez, who herself unseated a powerful incumbent Democrat in her New York district two years ago. Interestingly, however, Ocasio-Cortez declined to support the upstart Kennedy and has instead thrown her support to the establishment fixture Markey, who has even used “AOC” in campaign ads.

Morse, 31, began the campaign as a longshot but, according to one recent poll, has pulled within five points of the 71-year-old Neal. In a debate on Aug. 20, the two men clashed on a number of issues, including racism, the federal government’s coronavirus response, the opioid epidemic, climate change and the economy. Moderator Rich Tettemer called the debate “the most emotional and passionate and informative debate I’ve ever done.”

See video below of the Aug. 20 debate between Rep. Neal and Holyoke Mayor Alex Morse:

Morse, who was elected mayor when he was only 21, is openly gay. The UMass Amherst student newspaper, the Daily Collegian, broke the story earlier this month that the college Democrats had accused Morse, who lectures at the university, of using his “position of power for romantic or sexual gain.” The group added that Morse, who allegedly had relationships with students, was no longer welcome at its events, even as the university announced it was investigating.

Subsequent reporting by the Intercept revealed “that the allegations were part of a scheme by at least two members of UMass College Democrats leadership … to entrap and take down Morse, that had been contemplated for nearly a year, with [one of the leaders] hoping to curry favor with Neal.”

The Intercept later found that the effort was “more extensive than has previously been reported, targeting progressive organizations that had endorsed the primary insurgent as well as journalists for months.”

Critics have charged that the scheme was an effort to undermine Morse’s candidacy using a pernicious stereotype of a promiscuous gay man on the prowl for younger partners. Morse himself said the allegations were “rooted in age-old homophobic tropes.”

Eoin Higgins, a former colleague of mine who grew up in the Berkshires, is an independent journalist who has covered the scandal for the Intercept. He said recent polling suggests that the “smear campaign” has worked because Morse’s negatives have since increased.

“On the other hand, the race has a lot more visibility now and there are surely a number of motivated voters for whom the MassDems’ actions are providing a reason to vote for the mayor,” Higgins said. “I think it’s a toss up, with Neal having the advantage due to his entrenched power and incumbency. But he’s sweating for sure.”

The two elected Democratic officials who represent South County in the state legislature, Rep. William “Smitty” Pignatelli of Lenox and Sen. Adam Hinds of Pittsfield, are not facing primary challenges. Polls in Great Barrington are open from 7 a.m. to 8 p.m. on Tuesday, Sept. 1. Click here to see a sample ballot.